Join efforts for the beaches of Mexico

Under the slogan “United for the beaches of Mexico”, the company Pro Ambiente, a subsidiary of CEMEX, other companies and residents of the area, carried out sanitation work on the coastal coastline of La Ventanilla beach, in Oaxaca, where they managed to remove more than 50 thousand plastic bottles.

With the aim of reducing pollution on the coasts of Mexico, ensuring the recycling of waste and avoiding the generation of emissions through the circular economy, Pro Ambiente, a subsidiary company of Cemex, participated in the cleanup of La Ventanilla beach, an important ecotourism destination located in the state of Oaxaca.

Thanks to the support provided by the Real Lagarto cooperative, together with 80 people from the La Ventanilla and Chacahua communities, the beach was the place selected to carry out the “United for the beaches of Mexico” program, a project that seeks to add multiple efforts that promote the conservation of this coastal area. 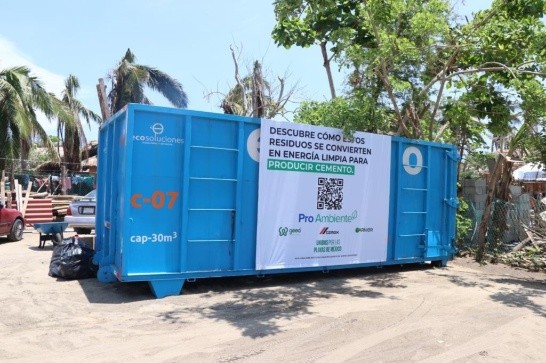 During the month of June, beach clean-up activities were carried out that covered five kilometers of coastline from La Ventanilla beach to the mouth of the Tonameca River. With this, not only the natural area was benefited, but also the inhabitants of the towns of Chacahua and Ventanilla.

The collection and cleaning work included the separation of waste, fundamentally those for which it is sought to create a recycling chain.as in the case of exotic PET, a type of color-added plastic commonly used for packaging.

This waste is treated by Pro Ambiente to carry out an energy recycling process in a CEMEX cement kiln, thus avoiding the generation of carbon dioxide emissions.

“We have the firm conviction and commitment to caring for the environment, which is why we work hand in hand with companies to simplify the process of comprehensive management of post-consumer waste, in addition to guaranteeing that waste that currently does not have a chain of recycling, are converted into clean energy to produce cement, thus integrating them into a circular economy,” said Guillermo Díaz, Director of Pro Ambiente.

Thanks to these tasks, more than 50,000 plastic bottles were removed, which had a positive impact on the care of biodiversity and species in the area.

Pro Ambiente’s experience was fundamental in fulfilling this task. For more than 28 years, this company has provided solutions for the comprehensive management of industrial, commercial and domestic waste, preventing it from being sent to landfills and supporting the reduction of the carbon footprint.

In addition, they have considerable experience in terms of energy recycling in cement kilns.. This reduces the environmental impact of waste, compared to traditional methods.

Cemex and Pro Ambiente, in alliance with the GEECI Circular Economy Business Group, installed the hopper where they deposited the non-recyclable materials, which were later sent to the Puebla Cement Plant, where they will be processed to produce clean energy in manufacturing. of cement.

“United for the beaches of Mexico” also included the participation of staff from L’Oréal, through its Garnier brand, and the GEECI Circular Economy Business Group, a program developed by the National Association of the Personal Care Industry and the Home (CANIPEC).

During the clean-up days, various talks were held with the participants detailing actions to take advantage of waste, reduce carbon emissions and identify recoverable waste to give it a new life through recycling. The initiative is aligned with the pillars of Futuro en Acción, Cemex’s program to achieve zero net carbon dioxide emissions by 2050.

Not a car with wings, but a megadrone: Volkswagen presents striking prototype of ‘flying car’

US justice opens case against Google for advertisements

Wall Street falls before the release of inflation and consumption data