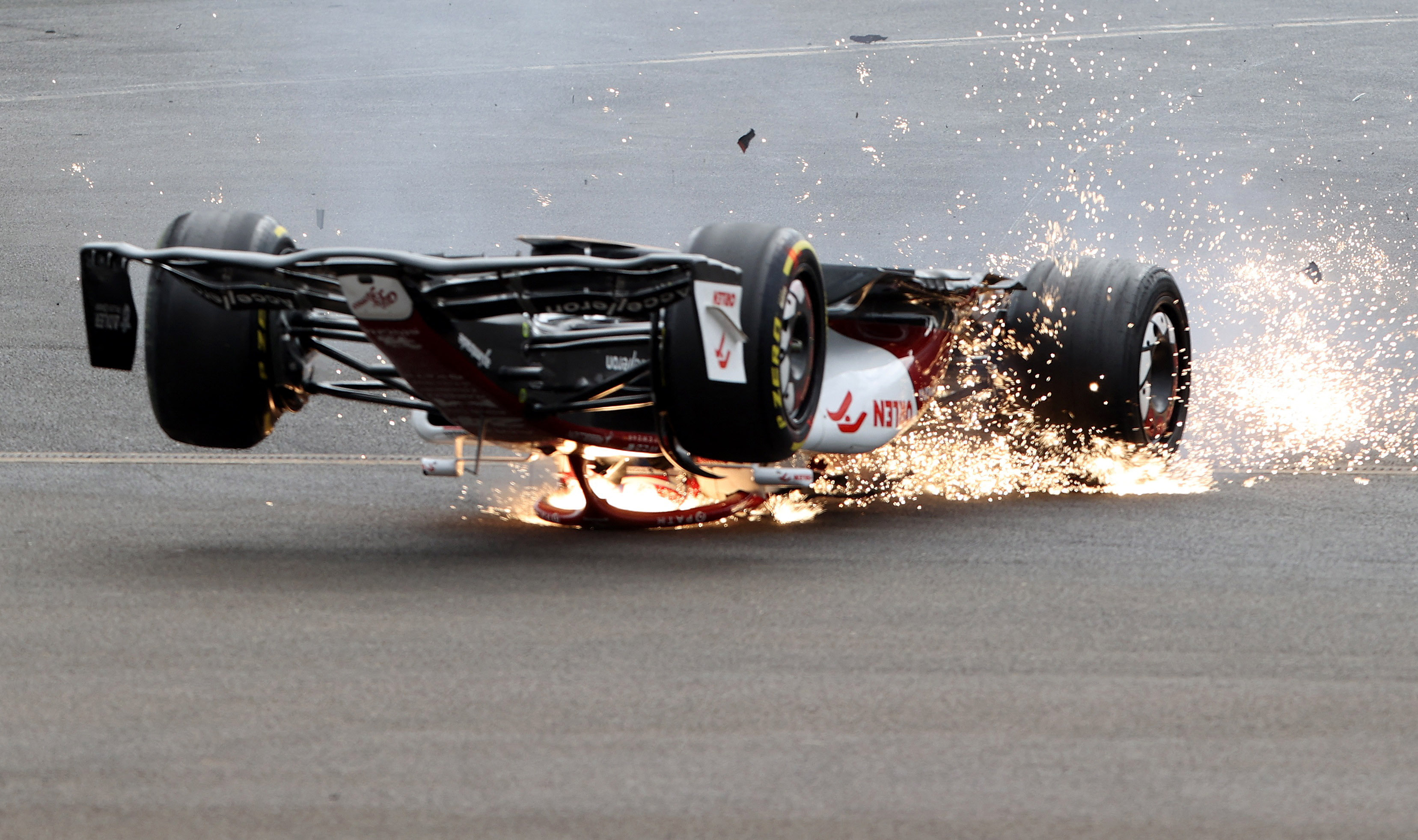 Guanyu Zhou’s car goes inverted towards the deceleration bed of the first corner at Silverstone. Her flight ended up hitting the fence and falling inverted in a narrow corridor (REUTERS / Molly Darlington)

The start of a car race is one of the critical moments, probably in which the drivers feel the most adrenaline, but also those who are watching from outside the cars. The reason is that when all the cars start from scratch, some do better than others, and overtaking and avoidance maneuvers occur that are not repeated at any other time in a competition. In Formula 1, the most technically advanced category in the world, due to the power and weight of the cars, these maneuvers are carried out at a higher speed, which increases the risk because it requires better reflexes to avoid an accident.

But there are accidents that cannot be avoided, both because of their mechanics and because of the current size of Formula 1 cars, which are almost twice as big as they were 30 years ago. That was what happened this Sunday at the start of the British Grand Prix, on the traditional Silverstone circuit, paradoxically, where the first Formula 1 GP in history was held, on May 13, 1950. 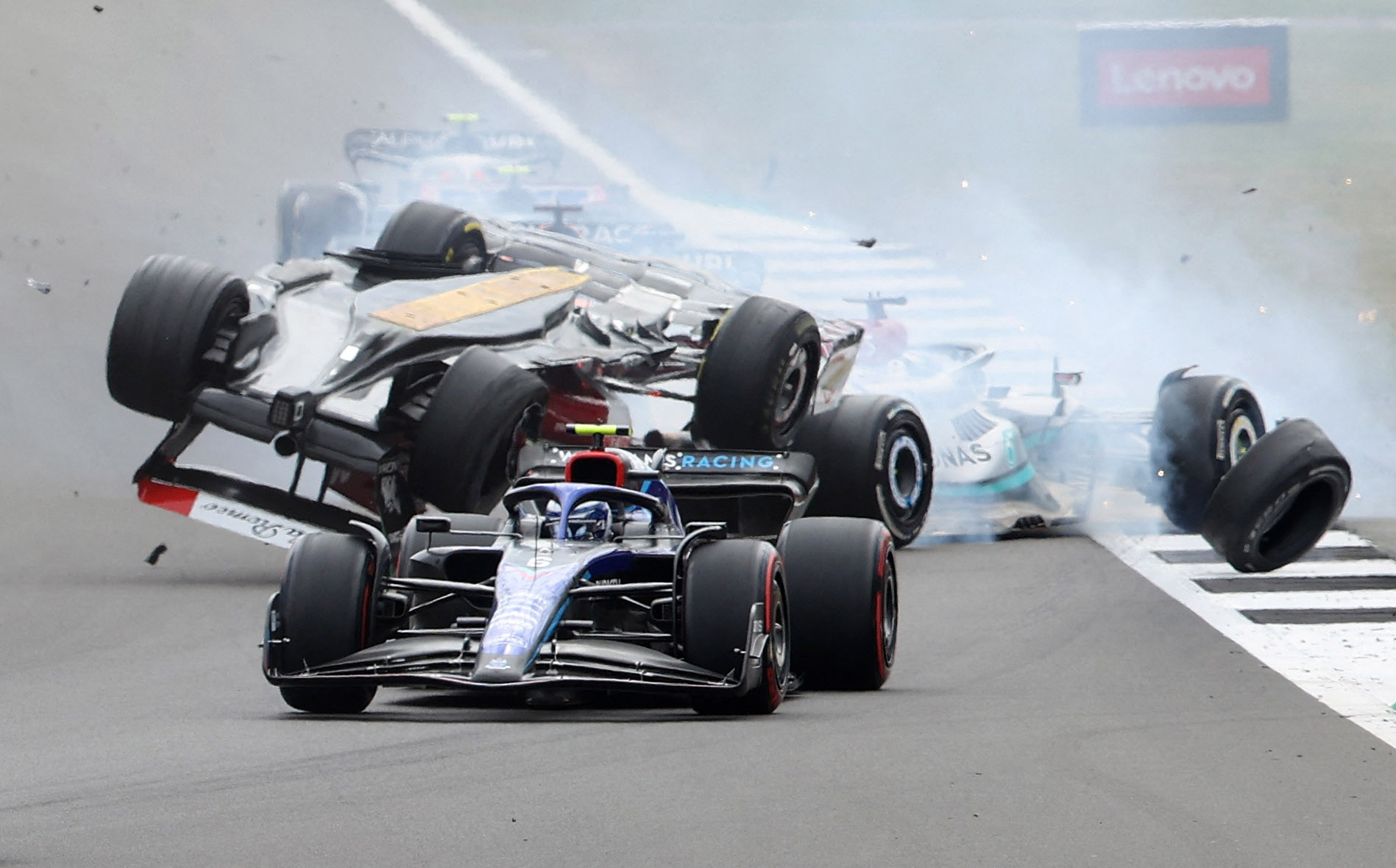 The accident began with a touch between George Russell and Pierre Gasly, which led the former to hit and overturn Guanyu Zhou’s car (REUTERS / Molly Darlington)

An unexpected move by George Russell to his left surprised Pierre Gasly, who had been beginning to overtake him from that side, entering the space between the Englishman’s Mercedes and the Chinese driver Guanyu Zhou’s Alfa Romeo, who was traveling with his Alpha Tauri. along the left edge of the main straight. The touch between Russell and Gasly caused the former’s car to suddenly cross and collide with the Asian driver, whose car automatically turned on its side and violently overturned.

While other drivers collided behind him in their attempts to avoid the Chinese driver’s accident, he headed down the remaining 200 meters between the straight and the escape zone of turn 1, but before reaching the tires of containment, his car got stuck in the leca (small stones of a very light material that are used to stop cars that get lost), then flew over the soft containment and directly impacted the fence that protects the public in the stands .

Once it hit the safety fabric, the car fell semi-inverted into the minimum space between that metal mesh and the rear face of the guard-rail, and there it remained with its driver trapped inside and unable to get out due to its own means. 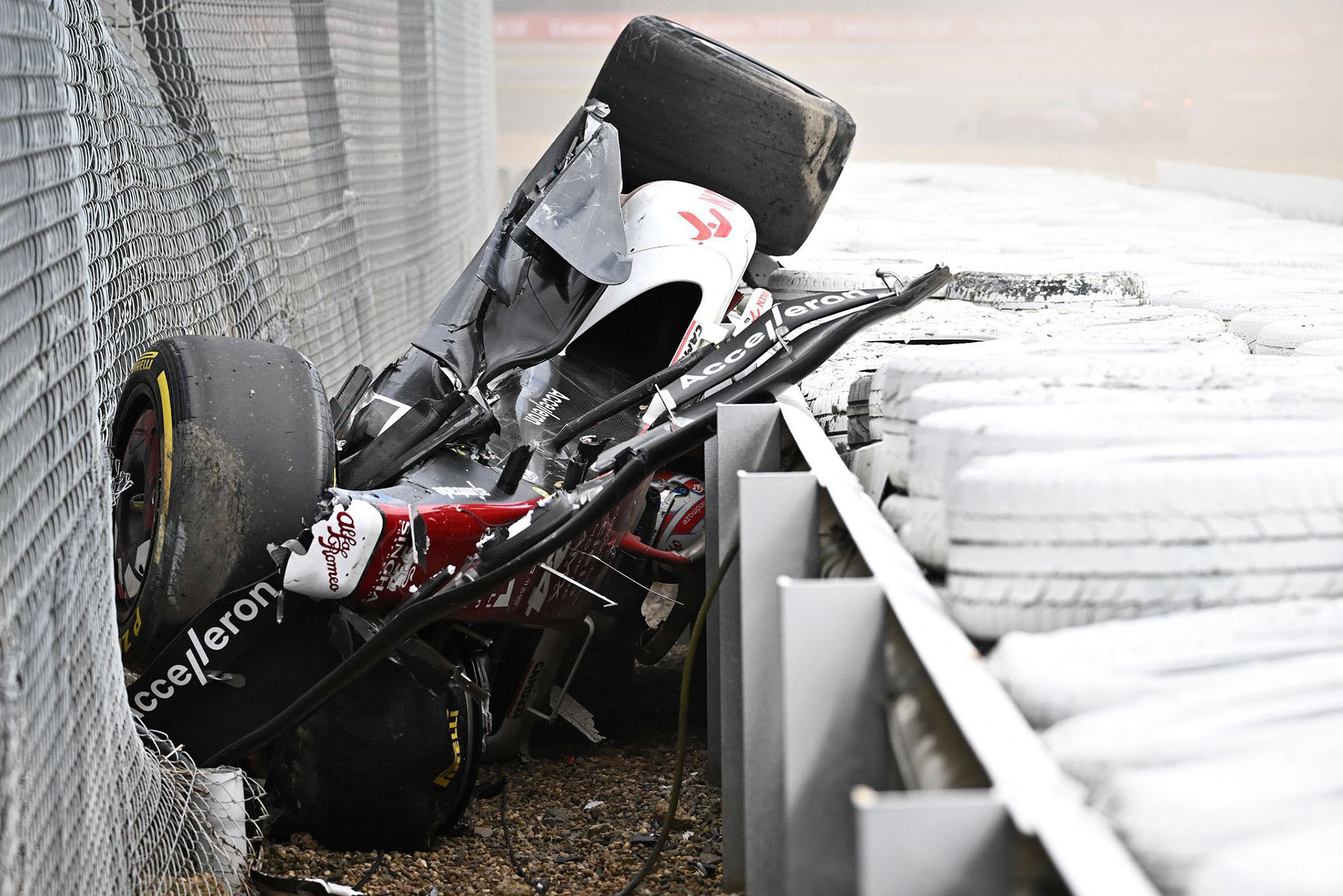 Zhou’s car inverted against the guardrail, with its driver trapped and unable to get out under his own power

The rescue services and George Russel himself were the first to arrive and report that Zhou was conscious and moving, which gave some peace of mind, then they began the maneuvers to turn the car around in the small space there was, and help its occupant to come out inside. As soon as it became known that his condition was good, the race that had been stopped immediately with a red flag was restarted, and as soon as the Grand Prix ended, official television showed the Chinese driver, already dressed in his sport uniform, talking with the authorities of the team and Formula 1 back in the pits after being discharged from the medical center.

That Guanyu Zhou was alive and intact is due more than ever to the famous Halo, that curved structure that Formula 1 incorporated as a way to protect the drivers’ heads in 2018, which generated so much resistance in the early years for a reason. aesthetic, but which has been fundamental in saving the life or health of several pilots since then. Without going any further, this same Sunday, before the Formula 1 Grand Prix, thanks to the Halo, a Formula 2 driver was also saved at Silverstone, Roy Nissany, when another competitor’s car, which had been flying at a height of one meter, hit that structure squarely in its uncontrolled race. 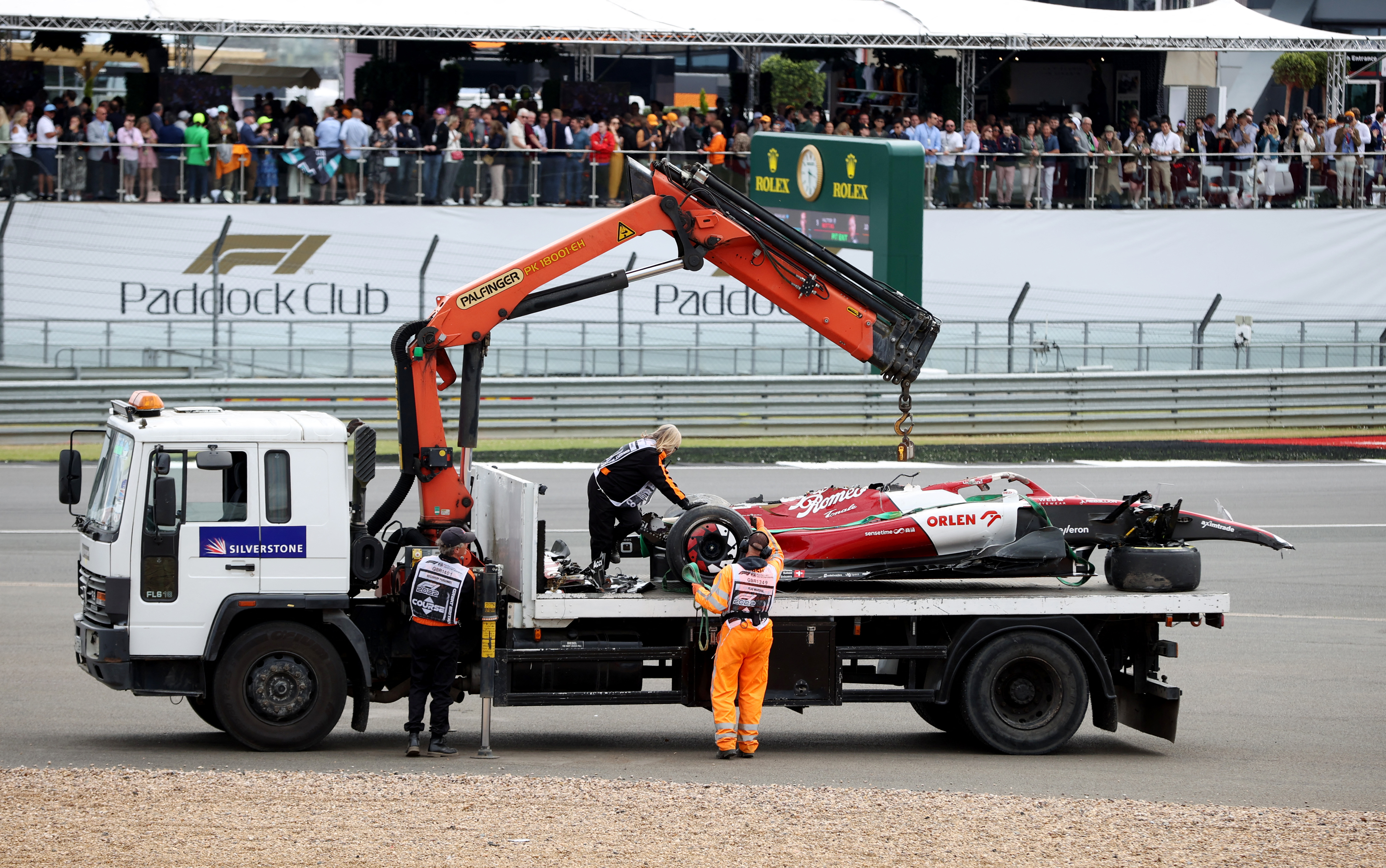 Once the pilot was removed, the car was taken in a truck to the pits, and it was then that the protection of the safety arch for the pilot’s helmet could be seen broken or failed (REUTERS / Molly Darlington)

But in Zhou’s accident, something happened that should never have happened and that gave the Halo the role of “guardian angel” of its pilot, because when the Alfa Romeo, built by the team, overturned at the beginning of the accident Swiss Sauber, the roll-bar broke, which is the safety arch that rises above the pilots’ helmet, precisely so that, if there is a rollover, the helmet does not hit the ground.

The FIA ​​(International Automobile Federation) requires a crash test to homologate monohulls before authorizing them to compete. These tests indicate that this structure on the pilots’ heads must resist a load equivalent to 60kN (6,118 kg) of lateral impact, 70kN (7,138 kg) of longitudinal force and 105kN (10,7070 kg) vertical. However, the way the car flipped over, the impact was like being thrown face down on the ground, and resisting more than 10,000kg of vertical force was not enough. The roll-bar disappeared on the first hit, and the entire race of the Alfa Romeo turned upside down was with the driver protected only by the Halo and the cockpit side supports. 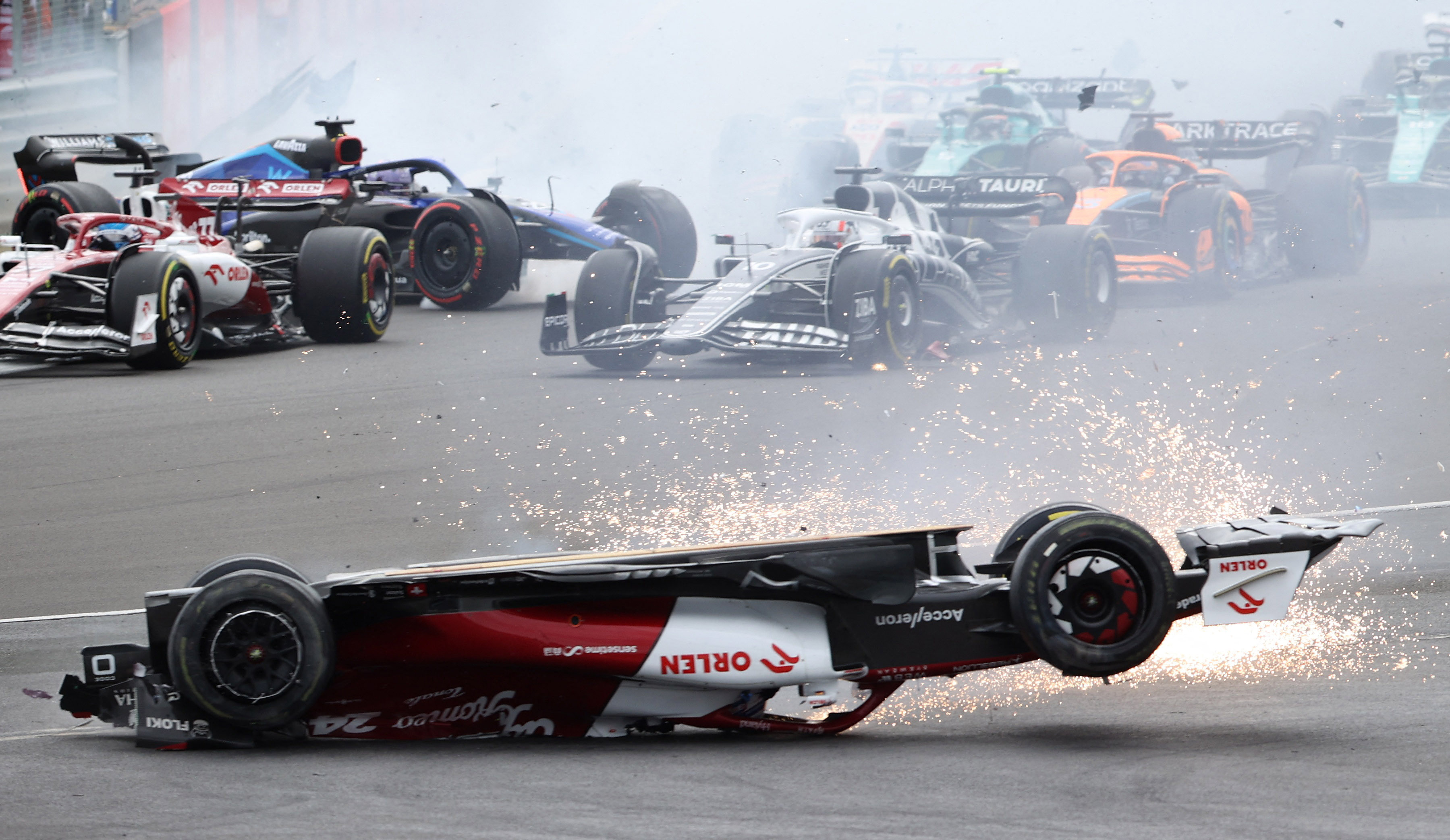 The inverted car, without the protection of the roll-bar over the driver’s head, because it broke on the first impact (REUTERS / Molly Darlington)

Although the car has passed the mandatory crash tests, something was not as it should be. Zhou’s accident was solo during his uncontrolled inverted ride, but an accident could put other obstacles in the way, such as another car or parts of another car flying through the area, which could have aggravated the situation. Probably the FIA ​​will have to demand higher resistance values ​​for next year’s cars, and why not, reinforce the current ones if possible.

But that wasn’t the only thing that went wrong at Silverstone. Falling after hitting the fence, the Alfa Romeo was trapped in a corridor so narrow that the pilot could not descend. If there had been a fire, as happened at Bahrain 2020 with Romain Grosjean, whose Haas was trapped inside a guardrail cut in two, Zhou could have been seriously injured or even put his life at risk. We will have to take note of this situation as well and avoid these invisible traps on the tracks from here on out.

Safety standards have improved markedly. These accidents, a few years ago, would possibly have been fatal, but just as 100% safety does not exist in motorsports, with each accident you can learn to improve new aspects.

“A 2-ton car to transport a 80-kg person is not efficient,” says an expertA story of panthers, pink cars and famous peopleOne of the world’s largest manufacturers warns about the price of electric cars