We summarize for you in five acts the controversy around the deputy Eric Coquerel, implicated for “his behavior with women” 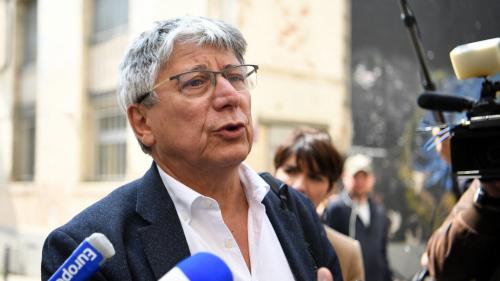 The accusations against LFI deputy Eric Coquerel are becoming clearer. As journalist Rokhaya Diallo mentioned, Thursday on RTL, suspicions of inappropriate behavior “with women”, the deputy of Seine-Saint-Denis denounced, in a forum in the Sunday newspaper, “unfounded rumors”. A left-wing activist, Sophie Tissier, finally seized the LFI committee against sexual violence on Sunday July 3. She evokes “inappropriate gestures” during a party in 2014.

The starting point of this affair is the intervention of the journalist Rokhaya Diallo, invited Thursday evening on RTL. While reacting to the appointment of Eric Coquerel as chairman of the National Assembly’s finance committee, the latter expressed her “astonishment” and raised the “fairly sensitive” question of testimonies concerning “the personality” of the deputy of insubordinate France (LFI). “I have several sources within LFI, I have heard several times from women who have spoken to me about the behavior he would have with women,” said the journalist, without specifying what this term covered.

Eric Coquerel elected president of the #CommissionDesFinances @RokhayaDiallo on #RTL : “I have several sources within LFI. I have heard of the behavior he would have with women. So I am surprised by this choice.” pic.twitter.com/ROK2QArITd

“I am aware that these are accusations,” she admitted, after citing an article from Causette magazine, published in December 2018 and titled “La France insoumiseprefer les submitted?” This investigation evoked, without naming him, “a manager, now an LFI deputy” accused of “known and common slippages” by several young activists of the time. Asked about the absence of a complaint against Eric Coquerel, Rokhaya Diallo argued that Taha Bouhafs, journalist and former Nupes candidate for the legislative elections in the Rhône, had ended his campaign because, in particular, of a report sent to the unit against sexist and sexual violence of LFI, as reported by Mediapart. This body is responsible for receiving alerts concerning members of the movement, possibly investigating and then transmitting detailed information to the governing bodies of LFI.

2LFI’s committee against sexual violence has received “no report”

This instance of the party stepped up to the plate on Thursday evening. “For several weeks, deputy Eric Coquerel has been the object of attacks on social networks raising suspicion about his behavior towards women. Attacks which have intensified today following his election as chairman of the finance committee”, writes the committee. The cell, which claims to be independent of the political direction of LFI, attests to having “never received any report” concerning Eric Coquerel, “for whatever reason”.

While Rokhaya Diallo simply claims to want “light to be shed” on these rumours, the committee says it is “available to listen to women and receive their testimonies” but deplores “the circulation of rumors not based on any element concrete”.

3Nupes executives warn against “accusations without any evidence”

guest of BFM TV Thursday evening, Manuel Bompard, deputy LFI (Nupes) of Bouches-du-Rhône, declared that “throwing accusations without any proof” was “very serious”, in a context which is just as serious. “Sexist and sexual violence is a serious enough subject for it not to be about rumors, things circulating on social networks (…) If Rokhaya Diallo has information, let her direct the people to the bodies set up within our movement. They will be processed”, he said.

The deputy also questioned the mention of the Causette article during the journalist’s intervention: “I don’t know what elements she has to make the link with this deputy. [Eric Coquerel]. I find it quite curious that we allow ourselves to launch this type of accusation when Eric Coquerel was appointed chairman of the finance committee of the National Assembly”, he reacted.

For her part, the deputy EELV (Nupes) Sandrine Rousseau declared Friday morning on the air of BFMTV that she did not have “direct testimony” concerning such facts, “of which we do not know at all the extent, nor on what this rumor is based”, she underlined. “And it’s not for lack of looking, I really tried (…) to find, because I too was told this rumor”, added the elected ecologist, who evokes an investigation personal made over the last few weeks.

For Sandrine Rousseau, the dissemination of accusations without proof risks above all “harming the fight of women”. “I send a message to all the victims, if there are any: I will listen with great respect to their word, assured the deputy for the 9th district of Paris. But for the moment, I have no testimony.”

Eric Coquerel reacted “for the first time” in the columns of the Sunday Journal, evoking “unfounded rumors”. “I am making this forum to affirm that I have never exercised physical or psychological violence or coercion to obtain a report, which characterizes the gateway to criminal behavior in the field of gender-based and sexual violence”, he writes in a text published on Saturday evening on the weekly’s website (subscribers).

“Several editorial offices have carried out journalistic investigations,” he recalls, believing that “nothing ever came out for lack of having found testimony that could be related to criminal behavior, a fortiori criminal”.

In this forum, the deputy for Seine-Saint-Denis mentions the testimony of Sophie Tissier. This former Left Party activist confided anonymously in 2018 to the magazine Causette. In a new article, published Saturday on Mediapart, she now publicly recounts in more detail an evening in 2014 during which she explains that she danced with him. She claims that he had “the wandering hand all evening” and evokes “several SMS” from Eric Coquerel so that they return together. “It was not an assault,” she says, adding that she did not want to enter the LFI cell at the time because, according to her, “it was not serious enough”. With Mediapart, Eric Coquerel simply recognizes a “flirt”.

Sophie Tissier finally announced late Sunday morning that she had seized the follow-up committee against sexist and sexual violence of La France insoumise. “I don’t want to minimize the facts. It was not a violent physical attack, but it was still inappropriate gestures,” she told franceinfo. “I saw that everyone was saying that the cell had not been seized, that it was only ‘we say’. So, since it is necessary to come to grips, I seize, “t-t she added, to explain her change of decision.

I have just contacted the CVSS sexual gender-based violence committee of the FI in order to endorse my testimony attesting to the unacceptable behavior of Eric #Coquerel. It is a form of aggression that must be denounced because it is part of the continuum of violence against women. pic.twitter.com/ffuwA9gdCX

Asked on Sunday on BFMTV about this report to the LFI authorities, Eric Coquerel denied “absolutely the inappropriate gestures, aggressive flirting gestures” towards Sophie Tissier. “I do not rule out filing a complaint for defamation,” he added.

In the process, LFI deputy Danièle Obono confirmed on BFMTV that the movement’s monitoring committee “is seized and will see what characteristics are in this report (…) It is important that we know exactly what it is.”