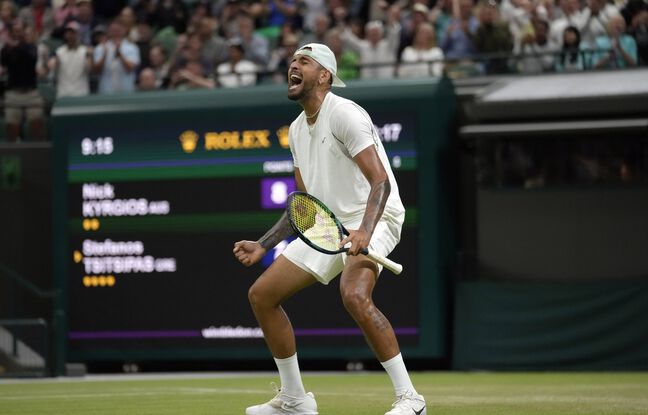 We can’t stop Nick Kyrgios anymore. The Australian loves Wimbledon and proved it again by defeating Stefanos Tsitsipas, seeded number 4, in the third round on Saturday (6-7, 6-4, 6-3, 7-6). He will face the American Nakashima in the round of 16.

“He was frustrated, but tennis is a sport of frustrations and whatever happens on the court, I love it,” Kyrgios assured just after exchanging a furtive handshake with the Greek, undoubtedly affected by this new premature defeat in Grand Slam.

“It was a crazy match, in an extraordinary atmosphere. I’m super happy to have passed, it was a crazy match… ”, commented the 27-year-old Australian. If the match was crazy, Kyrgios had something to do with it. He did everything to unpin his opponent, make the referee goat and hysterize the public. Until the point of general boiling where, alone, he regained his composure to lavish his brilliant blows.

For his part, Rafael Nadal struggled less to overcome Lorenzo Sonego in three straight sets (6-1, 6-2, 6-4). A match marked by an unusually tense exchange between Rafa and his opponent. The Spaniard then apologized and explained in a post-victory press conference.

Nadal, who seemed upset at the noise his opponent was making, brought him to the net for an explanation. The two men also had a long exchange when shaking hands after match point.

“I must say that I was wrong. I shouldn’t have called him to the net. So apologies for that. My fault. No problem, I admit it”, said the world No. 4 after the match. “It’s something I talked about with him in the locker room and it will stay there. »