Farmers aim for roadblocks on Monday, Marechaussee at Schiphol ready 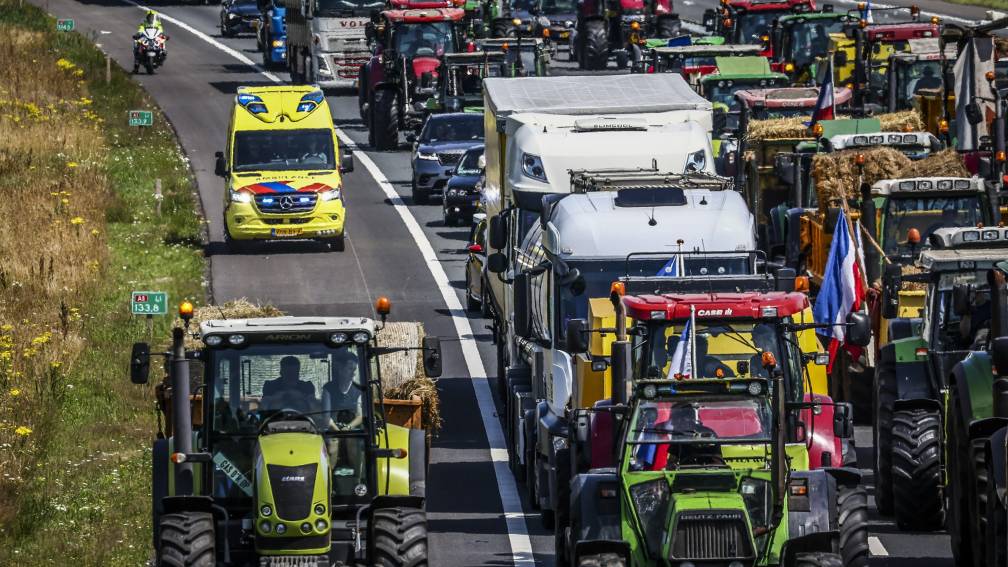 Tomorrow, protest actions by farmers are expected again against the government’s nitrogen policy. Chat groups call for slow actions on roads. The travel and logistics industry, among others, fear major delays on the road.

The Royal Netherlands Marechaussee has units and equipment ready to intervene if farmers want to block airports. Defense has trucks ready to remove confiscated tractors.

There is no official program so it is a guess at the magnitude of what will happen on Monday. Motorists are advised to consult the traffic information just before departure. People who have to fly tomorrow are advised to take the train to the airport.

A structure has been set up of dozens of app groups per province, on which farmers can announce local actions. “There will be a lot of slow-driving actions again if the police don’t block them,” one of the announcements on the Telegram chat app says. Actions are only announced shortly before the start, it says.

For people who have to go to the hospital: make sure you drive forward over the hard shoulder.

Radical farmers’ action group FDF says it has no idea what will happen on Monday. Leader Mark van den Oever speaks in a video message on Facebook about an upcoming ‘mega protest’. “The turnout will be very large, but the Farmers Defense Force is of course not organizing anything.”

Although Van den Oever does not provide details about actions in the video, he clearly hints at new roadblocks. “For people who have to go to the hospital: make sure you drive forward over the hard shoulder. If you tell your story there, you can go straight through.”

Although tractors are not allowed on the highway, farmer activists have blocked highways with agricultural vehicles last week, much to the chagrin of road users. Experts point out that these actions are prohibited and dangerous, and affect people who have nothing to do with the government’s nitrogen policy.

On Tuesday, rioters broke through a police blockade at the home of nitrogen minister Van der Wal. In Stroe, the riot police was deployed when rioters attacked a police bus with hammers and steel pipes:

ME van is attacked at farmer’s protest

A spokesperson for Agractie also states that nothing is known about tomorrow’s program. “We honestly do not know the scope of the actions tomorrow. We know that everything is coming, but it all goes through app groups of people themselves. Those actions may be on the edge, but we do call for the law to respect.”

Since 1 July, tractors must be provided with a number plate when they drive on the road. In theory, that rule makes it easier for agents to enforce against blockades. But the police have also repeatedly said that it is difficult for officers to act against such heavy equipment.

In any case, large equipment is available at airports on Monday. The Marechaussee, which is responsible for airport security, keeps armored vehicles on hand, among other things. “A blockade will not be tolerated,” said a spokesperson for the municipality of Haarlemmermeer, which includes Schiphol.

Care at the airport (staff)

In recent days, the Marechaussee has received several calls from concerned staff at Schiphol and airlines. They wonder if they can come to work tomorrow.

“We do have experience with demonstrations, so we are well prepared,” says the Marechaussee. “But we don’t know how big the protest will be and we have no concrete information about when the demonstration will take place. It is still very vague.”