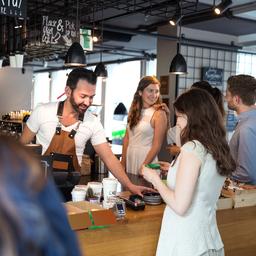 Competition between different sectors to attract additional staff is increasing day by day. Flash and meal delivery companies, supermarkets and the catering industry in particular compete for young seasonal employees, according to a tour of NU.nl.

“There is a huge problem: many catering entrepreneurs are currently unable to achieve the turnover they want because of the shortage of people,” says director Inga Blokker of FoodService Institute Netherlands. “There is certainly competition for seasonal workers and the catering industry in particular is now suffering from this. And the problems are far from being solved.”

The supermarkets are also still looking for staff, but this does not lead to major problems such as empty shelves. “Due to the shortage, it may happen that the service level is less than we want, but in the end everything will go ahead,” says a spokesperson for the Central Bureau for Food Trade (CBL).

The trade association also indicates that it is true that, for example, flash delivery drivers in the larger cities fish in the same labor pool as supermarkets. “That also applies to the catering industry. Young people in particular have a lot of choice in side jobs and that creates the necessary competition. In that sense, the supermarket sector suffers.”

According to director Dirk Beljaarts of Koninklijke Horeca Nederland (KHN), every potential employee is currently being pulled. “The need is so great that every employer wants to hire a young person, especially now that there is more seasonal work in the sector.”

Beljaarts emphasizes that the problems are serious everywhere. “The trains are not running, Schiphol does not have enough security guards and so on. But the government can lend us a hand, for example by making it more attractive for people who are in a benefit situation to work.”

According to FSIN director Blokker, it is no longer a matter of course that all the work is done by people. “We will have to simplify certain processes and focus more on technology, such as self-service or ordering and paying in the catering industry.”