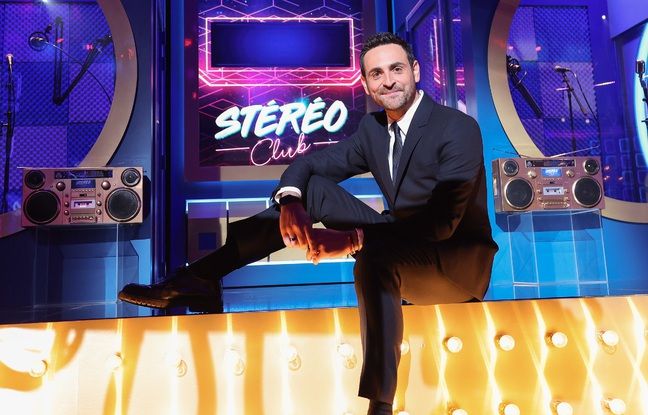 Music, and let everyone sing! The return of the Star Academy will be for the start of the school year on TF1, but the channel is already inviting its audience to wiggle in front of their post with a new Stereo Club number this Friday. Entertainment hosted by Camille Combal, adapted from an American format by Jimmy Fallon, will offer blind tests and karaoke to its guests – including Anggun, Michaël Gregorio, Mentissa and Anne Sila – and to viewers. “It’s very important that people can find the answers before the guests and are integrated into the game,” says Camille Combal to 20 Minutes .

2.7 million people watched the first issue a month ago. Is that a number you consider important?

It’s not my priority. What matters most to me is getting people back. I prefer to make a viewer too happy with what we did rather than making 18 million who say it was zero. My goal was to redo a musical entertainment, it showed me that people wanted that and it made me too happy. If we could redo this score on the second, we take out the champagne.

“Stereo Club” is the adaptation of an American show by Jimmy Fallon. Are there any tests that you refused to decline because they were incompatible with the French public?

The show starts with the craziest musical events of Jimmy Fallon’s late-show, which are themselves chosen according to the artists present. There, we were lucky to have Anggun and Vincent Niclo so we created a battle between them, which does not exist in the United States, to put these two voices in competition. It gives a super powerful duo. We also found proofs for Michaël Gregorio, we asked him to sing ACDC with the voice of Julien Doré because we know he does it well. We adapt.

Your mom will pop a head in this second issue. How did you come up with the idea of ​​involving her?

It’s very important that people can find the answers before the guests and are included in the game. We thought of this show as an evening at home where everyone has fun with the viewers. And in my house, there is my mom! So it had to be there too, even if it’s not in the American version (laughs). She can’t put the name on an artist when she sees him in a photo so the guests will have to find them.

What does a work meeting with Camille Combal look like? Is it more of an MJC atmosphere or a CAC40 company?

We are really a small team with fantastic girls and boys with whom I have been working for almost ten years. We want it to stay family like that. We’ve been a group of friends for a long time, I also have childhood friends that I brought back to Paris. As we have a lot of things going on, it’s a lot of work because we are in a small committee. The only problem is that there are six of us with a coffee maker running at full speed.

“Stereo Club”, is it an American show?

Not that much ! It’s adapted from an American show, it’s big but it’s not excessive. We have one of the biggest TV studios because we have a final in a huge jukebox, we have a part with games, another with a band… It’s just a show that requires a lot of people and means, it gives this set with a lot of depth but which is just commensurate with this show which is crazy.

“Stereo Club”, “And then”, “Mask Singer”, “Welcome Back”, “A golden family”, “Camille and Images”, “Dancing with the stars”… All that in one season! When we have so many shows, do we have time to work on new concepts?

You have to know that we refuse a lot of things… Despite everything (laughs)! We come back to the small family team that we form, we think about our stuff, everyone gives their opinion. At some point, we can’t do more. We don’t want to become the biggest TV company at all, that doesn’t interest us at all. What we want is to make beautiful projects that we like like Stereo Club on which we reflect for months, even years. We give the maximum for that so it forces us to refuse a lot of things. We are not a very TGV team, we are more on the small Intercités between Gap and Grenoble.

And the season is not over since season 4 of “Mask Singer” is currently filming… How is it going with the new jury?

It’s going really well! Vitaa is formidable, she has a formidable ear. She found Slimane directly (laughs). Jeff Panacloc is awesome and everyone loves Chantal Ladesou who’s having fun. And Kev Adams hasn’t heard back on Parcoursup so he’s doing it again for a year. It gives a great team of investigators, they are really in the game and in the performance. We did two shows and therefore four unmaskings. The American stars are coming… I don’t even know who they are!

We also see you on YouTube with Mcfly and Carlito, Michou and Inoxtag… When will you open your own channel?

I don’t know… In any case, I really enjoy it all the time, they are really super creative, super nice guys. Michou is like my little brother. We always have a good time, we will definitely do it again. We also plan to do little things occasionally on the Internet but for the moment, we don’t have time to do it at all.