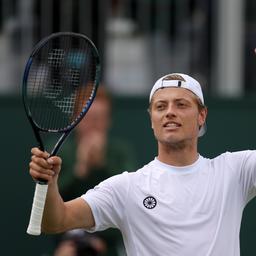 Tim van Rijthoven will play on the Center Court against Novak Djokovic in the fourth round of Wimbledon on Sunday evening. The cracker between the Dutch sensation and the Serb is the last match of the day on the main track in London.

The matches on the Center Court start on Sunday at 2.30 pm Dutch time. The first match of the day is a duel between Heather Watson and Jule Niemeier in the women’s singles. This is followed by the showdown between Jannik Sinner and Carlos Alcaraz among the men.

It is therefore certain that Van Rijthoven and Djokovic can only start their fourth round match in the evening. The Serb, the number three in the world, has so far played all his Wimbledon matches on Center Court.

The duel with Djokovic is the culmination of a very strong period for Van Rijthoven. The number 104 in the world won the grass tournament in Rosmalen a few weeks ago and therefore received a wild card for Wimbledon, where he dealt with Federico Delbonis, Reilly Opelka and Nikoloz Basilashvili.

With Botic van de Zandschulp there is another Dutchman in the last sixteen of Wimbledon. De Veenendaler, who dealt with Richard Gasquet in four sets on Saturday, may play against Rafael Nadal on Monday for a place in the quarterfinals.

It is the first time since 2002 that two Dutchmen are in the fourth round of a Grand Slam tournament. Twenty years ago, Richard Krajicek and Sjeng Schalken reached the quarterfinals at Wimbledon.

It’s going to be tropical again this week