On Saturday morning, Eduardo Salvio said goodbye to his friends and family at the Ezeiza Airport and left with his new partner for Mexico, where he will sign with Pumas after not having renewed his contract with Boca Juniors. Before boarding, Toto was greeted in person by the former president xeneize Daniel Angelici and gave statements to the media present.

“It’s a new beginning, so I’m happy with another adventure in my career and with the best expectations. For me it was a dream to wear the Boca shirt, a privilege. It’s the team I’ve been a lifelong fan of and I’m leaving with four titles, many games and goals. I enjoyed it a lot, ”said the 31-year-old winger who did not reach an agreement with the Football Council to extend his bond.

Regarding the negotiations with the blue and gold board, he specified: “The possibility of staying was there, but as everyone saw the renewal offer, it took a long time and for my part I knew that the possibility of leaving was there. The club wanted one thing, the player another, there was no agreement and I have to go. But everything is fine, I’m happy.” Regarding this issue, he deepened: “I waited for Boca until the end, that’s why I had not closed anything with any club and I always told my representative that I wanted to wait for Boca’s offer until the last day. He arrived and unfortunately we did not agree”.

Salvio had arrived at Boca from Benfica in mid-2019, at the start of Angelici’s last semester as president. The leader made good friends with the Toto, whom he fired personally in Ezeiza. The former Lanús had one of the most important contracts in Argentine football and the Council offered to renew it with a considerable reduction in his salary, until the end of 2023 (with the option to extend it for another year in case of winning the elections). The deal did not prosper. 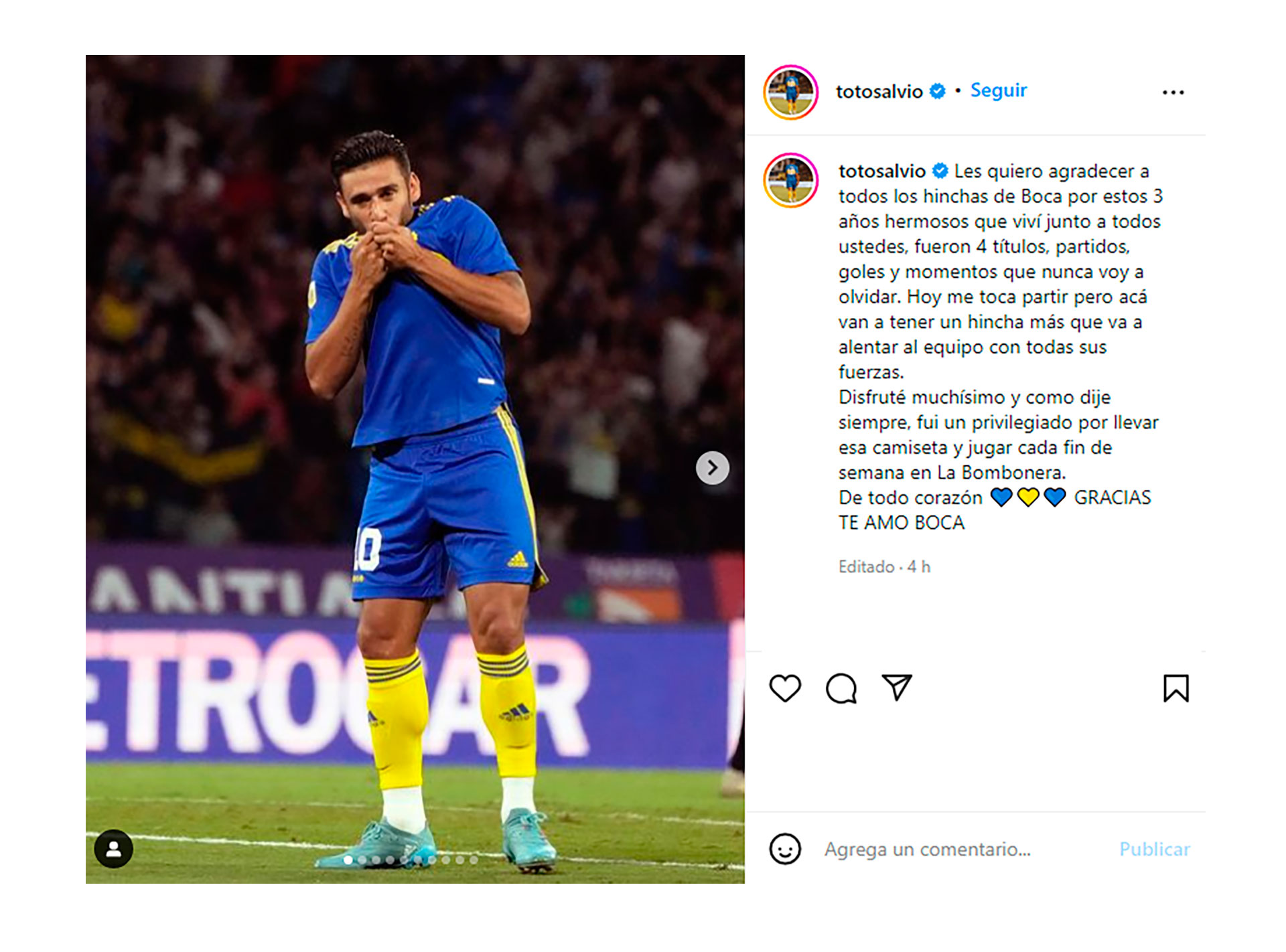 The farewell of Toto Salvio in social networks

“I’m leaving happy because I gave everything I had for Boca, I won four titles, which is not easy, and I’m leaving with the dream come true of having played every weekend at La Bombonera, which is something unique,” said the player who He left comforted by the messages from the xeneizes fans and also by the reception of those from Pumas, his new team.

Regarding the next objectives, he revealed that his new DT Andrés Lillini convinced him to sign and remarked: “I always want to compete to the fullest. I am 31 years old and I am looking to win things, titles, important games and goals. Not because I go to Mexico that will change. I go there and I want to be champion.” And he ruled out going through a bad physical moment: “I know what I can give and what I can’t. I am very well physically. What others say doesn’t interest me much, I’m very calm”.

Finally, there was a message for his teammates from Boca and the path that remains for them in the current edition of the Libertadores: “It is always the maximum objective. The farewell was very emotional because it is difficult to leave a place where one felt so loved. I am one more fan and they have my full support. I always love Boca, I was and always will be. They will have one more fan cheering in Mexico.”

The rapporteur Daniel Mollo began to insult in Italian in Banfield’s third goal against Boca After Salvio’s dismissal, Boca Juniors announced which player is the new owner of the number 10 shirt Boca Juniors could add a reinforcement thanks to an old debt for the transfer of Cristian Pavon