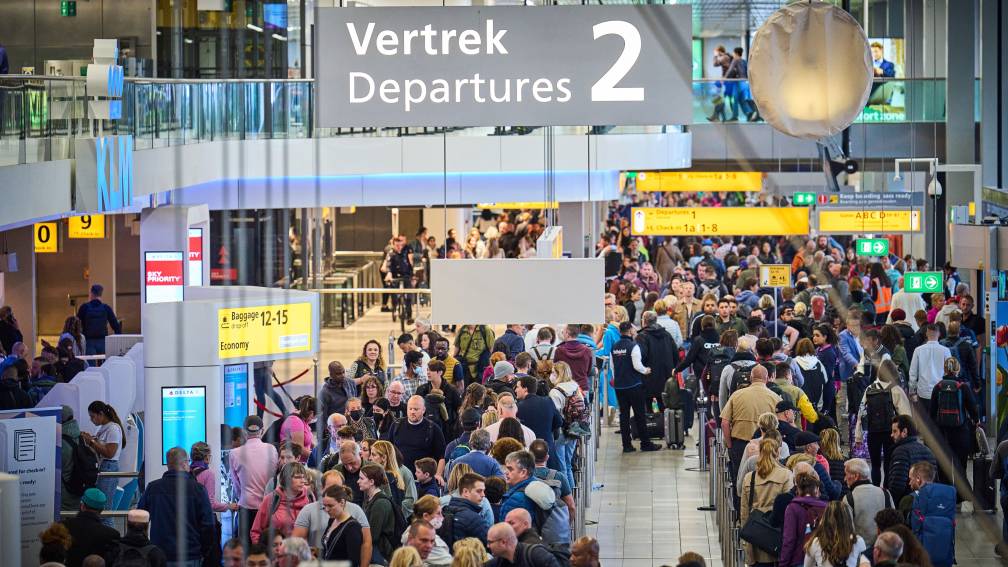 It was busy early this morning at Schiphol. Vacationers and other travelers waited far outside the departure halls and it can take a long time to get through security.

ANP news agency reports that most people accept the crowds and that there are no angry reactions from waiting travelers. People do worry about whether they will make their flight. A number of flights have been delayed or cancelled.

Schiphol has been struggling with a shortage of staff for baggage handling and security for some time now. The airport therefore indicated earlier that it will be difficult to cope with the summer crowds and various measures have therefore been announced.

For example, this month there is a maximum number of 67,500 travelers who are allowed to depart from Schiphol daily, but that measure will only take effect from next week. This means that thousands less travelers can depart from the airport every day. KLM travelers in particular will notice this.

This traveler was also waiting outside the departure hall this morning:

It is not only busy at Schiphol, there are also problems at other European airports. This weekend, for example, there is a strike at Charles de Gaulle Airport in Paris. As a result, one in five flights at the largest airport in France is canceled today.

They had to deal with a ‘suitcase chaos’ at Frankfurt airport yesterday. Suitcases piled up there due to a lack of staff.

A passenger filmed the scenes at the airport:

In Ireland, the army will help with security at Dublin airport at times of heavy traffic or if many staff are cut off during a resurgence of the corona virus. They also have great difficulty finding staff there. Many people have been laid off during the corona crisis, but now that air traffic is picking up again, it is hardly possible to hire new people.

The Belgian airport Brussels Airport says it is ready for a busy summer. In recent weeks, the airport has filled hundreds of vacancies to cope with the expected crowds. Brussels Airport expects about 4 million travelers this summer.

Schiphol may face a new problem on Monday. Farmers’ organizations have said they want to shut down the entire country that day in protest against nitrogen policy, especially actions around airports. Schiphol has therefore urged travelers to come to the airport by train as much as possible.

Defense Minister Ollongren said yesterday that the army is ready to assist at Schiphol on Monday. “Schiphol is vital. That must be able to continue,” says Ollongren. The roads to the airport must remain free, according to the minister. She therefore called on the farmers not to go to Schiphol.