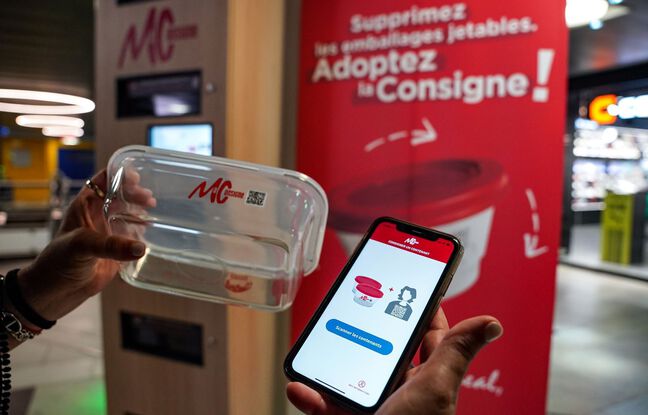 According to Monegasque government studies, nearly two million plastic containers are thrown away each year, in the Principality alone. Faced with this observation and the reality that incinerated plastic is the main source of greenhouse gases on the Rock, with 23% of emissions, the mission for energy transition (MTE) has set itself the challenge of achieving a reduction by 55% by 2030 with a goal of “zero single-use plastic waste”.

And to achieve this, the city-state has just launched the “MaConsigne” system. Twenty-seven take-out outlets in the city now offer glass containers for their customers. They can then deposit the dirty containers in one of the 20 terminals scattered around the Principality.

“As they say, there is no better waste than that which does not exist, begins Annabelle Jaeger-Seydoux, director of the mission for energy transition (MTE). We embarked on the vast project in 2016 with the end of single-use plastic bags, then that of everyday objects such as stirrers, cutlery or straws. “MaConsigne” is a continuation of our actions and anticipates the measure of January 1, 2023. In six months, companies with catering areas will have to eliminate all single-use items. »

The director of the MTE conceives that it is easier to support “everyone in the process of an ecological transition” by being in a “country city” and thus, allow coordination at the scale of the territory. To date, nearly 1,500 containers have been requested for 27 different locations. There would be only a dozen restaurants that have not yet joined.

On the customer side, “it is very well received, assures Annabelle Jaeger-Seydoux. During our surveys, 90% of people questioned said that if it was easy to do, they would do it. We spent three years studying to get there. To take advantage of the service, simply download an application, enter your bank details for the deposit of 7 euros if the container is not returned to one of the terminals within 14 days. [le montant n’est pas débité si c’est rendu]. On MaConsigne, we geolocate partner locations as well as collection terminals [cinq sont à la gare, trois à la Condamine, six à Fontvieille, cinq à Monte-Carlo et une à Monaco ville]. Each can accommodate up to 100 containers. »

This operation is also in circular economy. The director of the MTE specifies: “We only have local partners. From those who collect the glass containers to those who wash them to the organization that sticks the QR codes on the boxes. It is a perfect illustration that the circular economy can work with an activity that generates jobs locally and encourages purchases in the Principality. It’s a virtuous circle. »

The next steps in the project are to extend “MaConsigne” to delivery and imagine “zero plastic waste” for corporate restaurants. “The next prospect would be to offer this system to the municipalities bordering Monaco, adds Annabelle Jaeger-Seydoux. We have lots of ideas. Just on the packaging, we could go even further. »

She concludes: “The idea is to propose, to set up in the most accessible way so that, if someone wants to do it, they can. There are no more excuses for ecology. »