Etchecolatz, the repressor who never repented and enjoyed making fun of the relatives of his victims 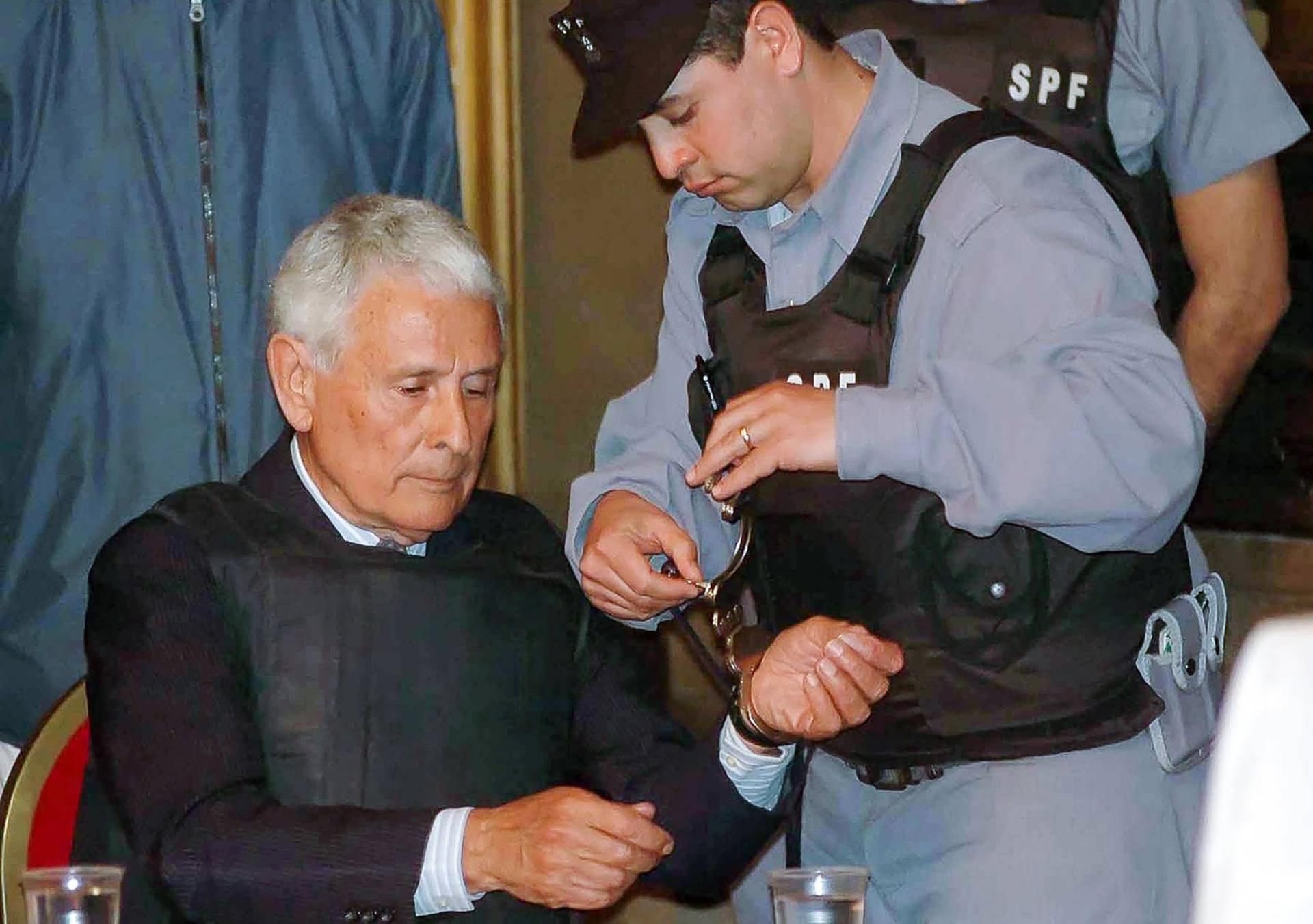 The repressor Miguel Etchecolatz with handcuffs on. He died serving his sentence for the crimes he committed in the last dictatorship (Télam)

Miguel Etchecolatz died today, at the age of 93, without ever having shown any sign of repentance for the crimes he committed when he was “owner and lord of life and death” of the Camps Circuit, the network of clandestine detention and torture centers largest in the country during the last dictatorship.

Among the hundreds of crimes for which he was responsible are the kidnapping and murder of a group of adolescents known as “La Noche de los Lápices”, the theft of babies from disappeared detainees, and the disappearance of Jorge Julio López, the bricklayer and Peronist militant who had given a key testimony about his cruelty in one of the trials against him.

López’s statement against Etchecolatz in one of the Camps Circuit trials had laid bare the degree of perversion that the former police officer could reach. 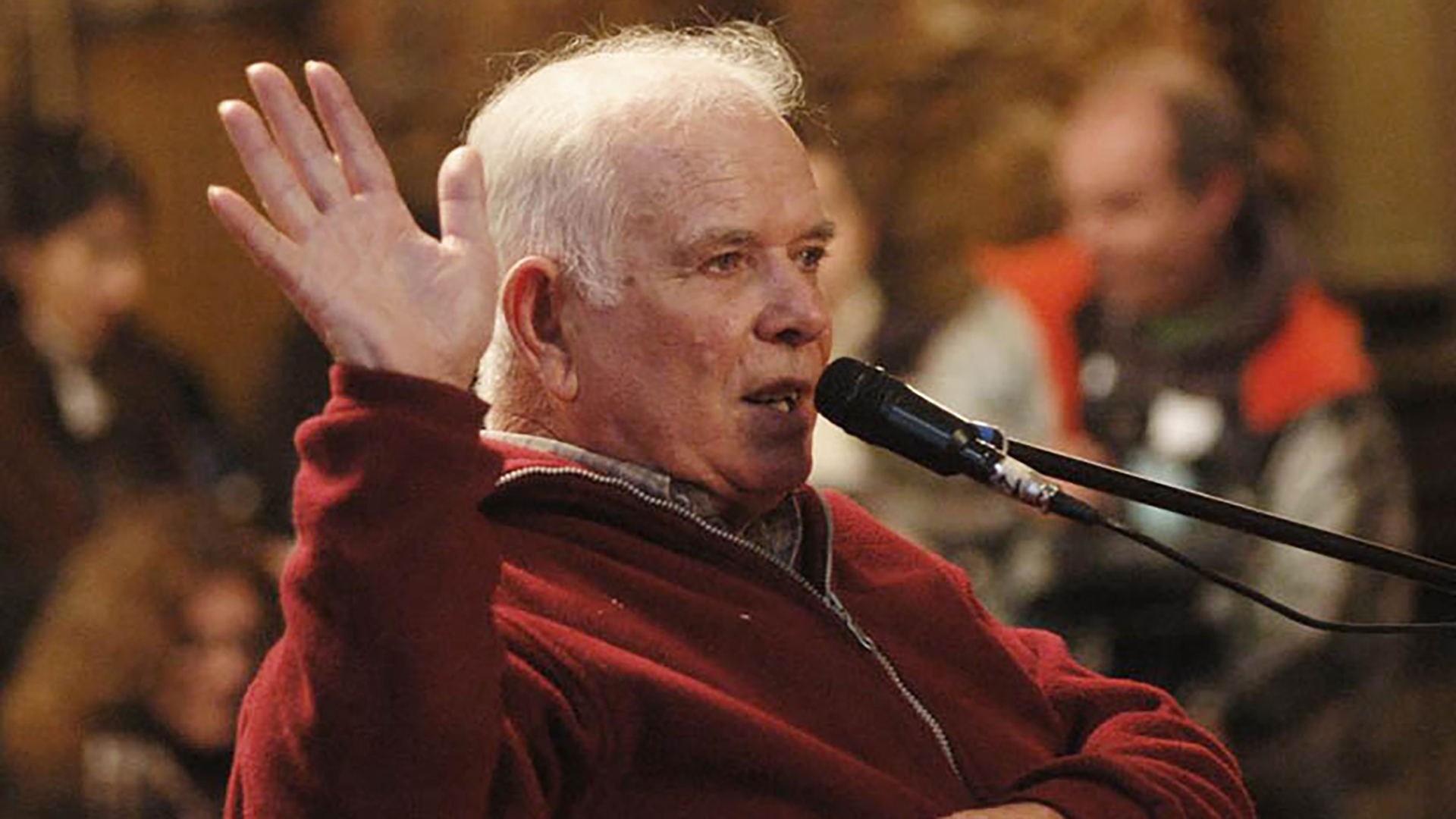 Jorge Julio López was one of the main accusers of Miguel Etchecolatz and was disappeared in democracy (Credit: Rafael Yohai)

In front of the court, López recounted in great detail the murder of three of his companions in a clandestine detention center in La Pata: “At around 11 or 12 in the morning, Patricia Dell’ Orto appears all tortured with her husband. . Patricia didn’t answer, her husband was lying all hurt. She was dragged from a lock of her and pulled out of her. She was bleeding, everyone was undone. After her, they tied her to a palenque and had her tied up in front of where we were. And Gómez, the boss, kicked the husband and told him: ‘Get up, there are a lot of Montonero boys here and they’re going to be ashamed that a boss is so weak, that he’s lying down,’” he said.

He also testified about the torture to which Etchecolatz himself had subjected him:

“Go up, go up a little more than this gringo who is here on the grill, who is in another place where I prodded him, he turned around, because there it was weak (the prod)’. And she would get close to me, but with a hood, a furry, monkey hood. ‘Pretty handsome like you did that night!’, the commissioner told me. It turns out that that day I didn’t do much prodding because it was battery powered. He felt the tickle. ‘Now here you are going to feel,’ he said to me. And he asked the others: ‘Turn the machine on directly from the street,’” López explained to the judges.

“Who was telling you this?” one of the judges asked, and López, without hesitation, pointed at Etchecolatz. 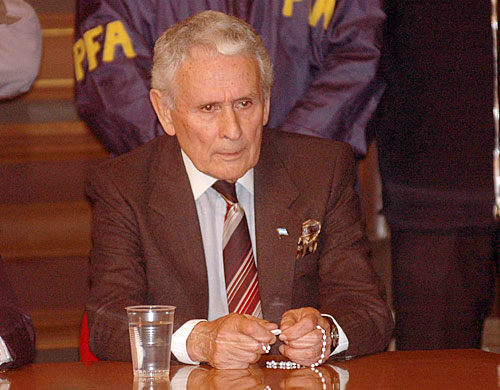 Etchecolatz in the dock of the accused TELAM

Jorge Julio López was disappeared for the second time on September 18, 2006, in full democracy, when he left his house to go to the court that that day was going to hand down a new sentence against Etchecolatz.

At the end of October 2014, the former Director of Investigations of the Buenos Aires Province faced the final stage of another trial as a defendant, in front of a court presided over by Carlos Rozanski, the same one who had sentenced him after hearing López’s testimony.

There Etchecolatz perpetrated perhaps the greatest mockery of the relatives of his victims.

At the moment in which the sentence that condemned him to life imprisonment was read, the former head of Investigations of the Buenos Aires province took a small piece of paper and unfolded it. When he finished reading the ruling, he tried to hand it over to the Court, but they prevented him from doing so.

Leo Vaca, a photographer from the Infojus agency who was covering the trial, took a photo with his camera on the piece of paper and fired. On the paper, Etchecolatz had written, in his own handwriting: “Jorge Julio López.”

A way of saying: I know what happened to him, but I’m not going to say it. 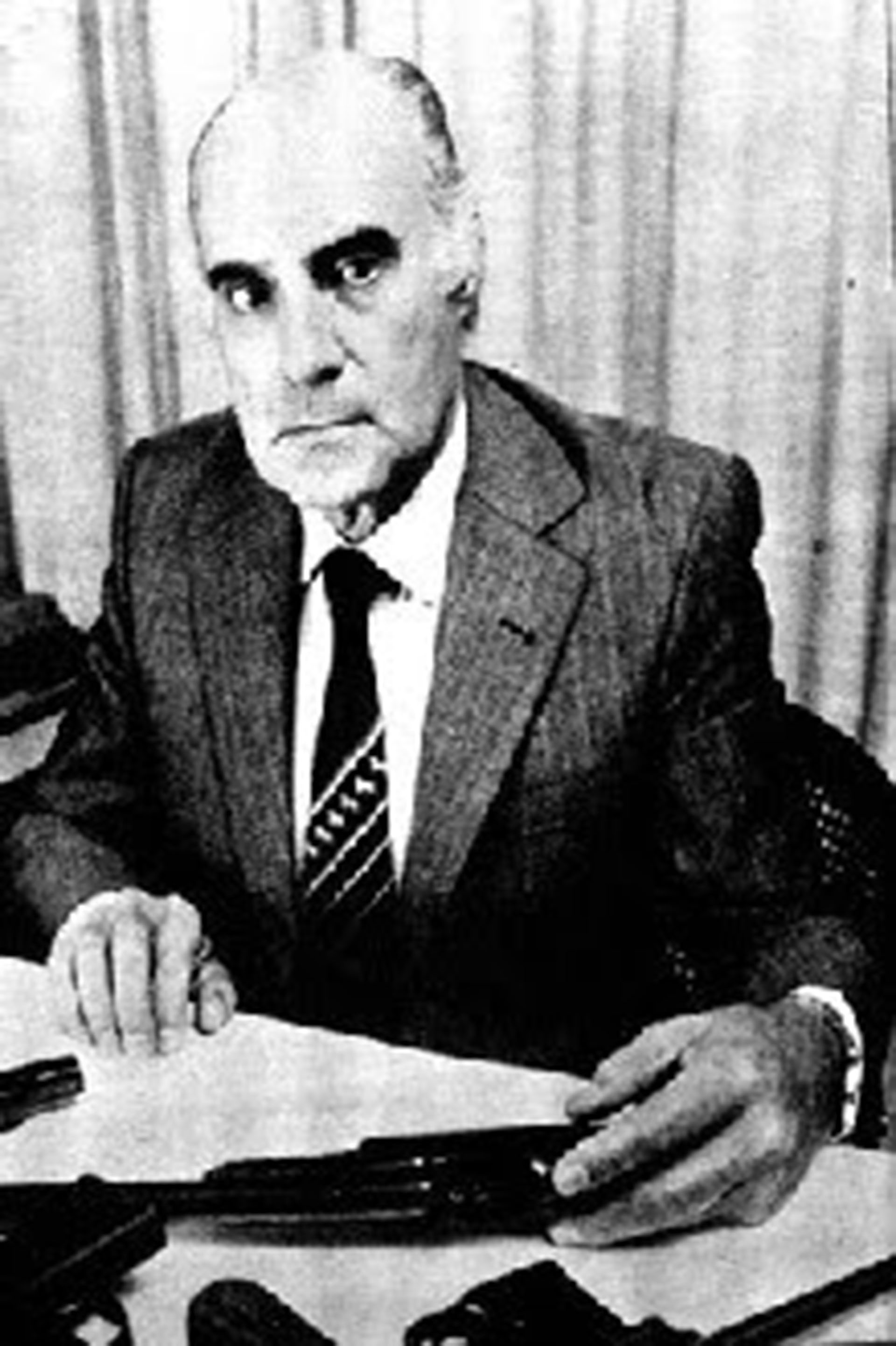 Ramón Camps, chief of the Police of the Province of Buenos Aires during the dictatorship and lord of death in the Buenos Aires territory. Etchecolatz answered directly to him

Operative Chief of the Camps Circuit

Etchecolatz was the man who knew everything, but prided himself on not saying it.

From the headquarters of the Police of the Province of Buenos Aires, after the coup of March 24, 1976, the then Colonel Ramón Camps had set up one of the most extensive and forceful structures of the system of illegal repression of the dictatorship. So much so that he is the only one of the entire repressive apparatus that was known by the name of his boss, “El Circuito Camps”.

As the highest-ranking policeman and right-hand man of the military, Etchecolatz became the true operational chief of that repressive network of the systematic plan for the disappearance of people perpetrated by the dictatorship.

It was made up of a network of 29 Clandestine Detention and Torture Centers (CCDyT), most of them located in the premises of the Buenos Aires police itself, in which thousands of people were illegally detained – and in many cases never appeared again.

Chupaderos such as “Arana”, “El Pozo de Banfield”, “El Pozo de Quilmes”, “Fifth Police Station”, “Puesto Vasco”, “El Sheraton” and the most sophisticated of all, “La Cacha”, were part of their domains.

Through them passed, among many other victims of illegal repression, the students kidnapped in “The Night of the Pencils”; the director of the newspaper La Opinion, Jacobo Timerman; the members of the Graiver Group and the so-called “Group of 7″, a group of young militants whom the chaplain of the Buenos Aires Province, the priest Christian Von Wernich, tried to make collaborate through tricks and promises of release.

Once kidnapped by the task forces, the victims were transferred to the different clandestine centers – they could pass through several of them – where they were tortured and interrogated, sometimes for months. Then their fate was decided: a few were released, others were disappeared and in many cases they were murdered and then the circumstances of their deaths were forged, passing them off as “killed in a confrontation.” For the latter, the doctors of the police morgue signed false death certificates that allowed their “legal” burials as NN in the La Plata Cemetery. 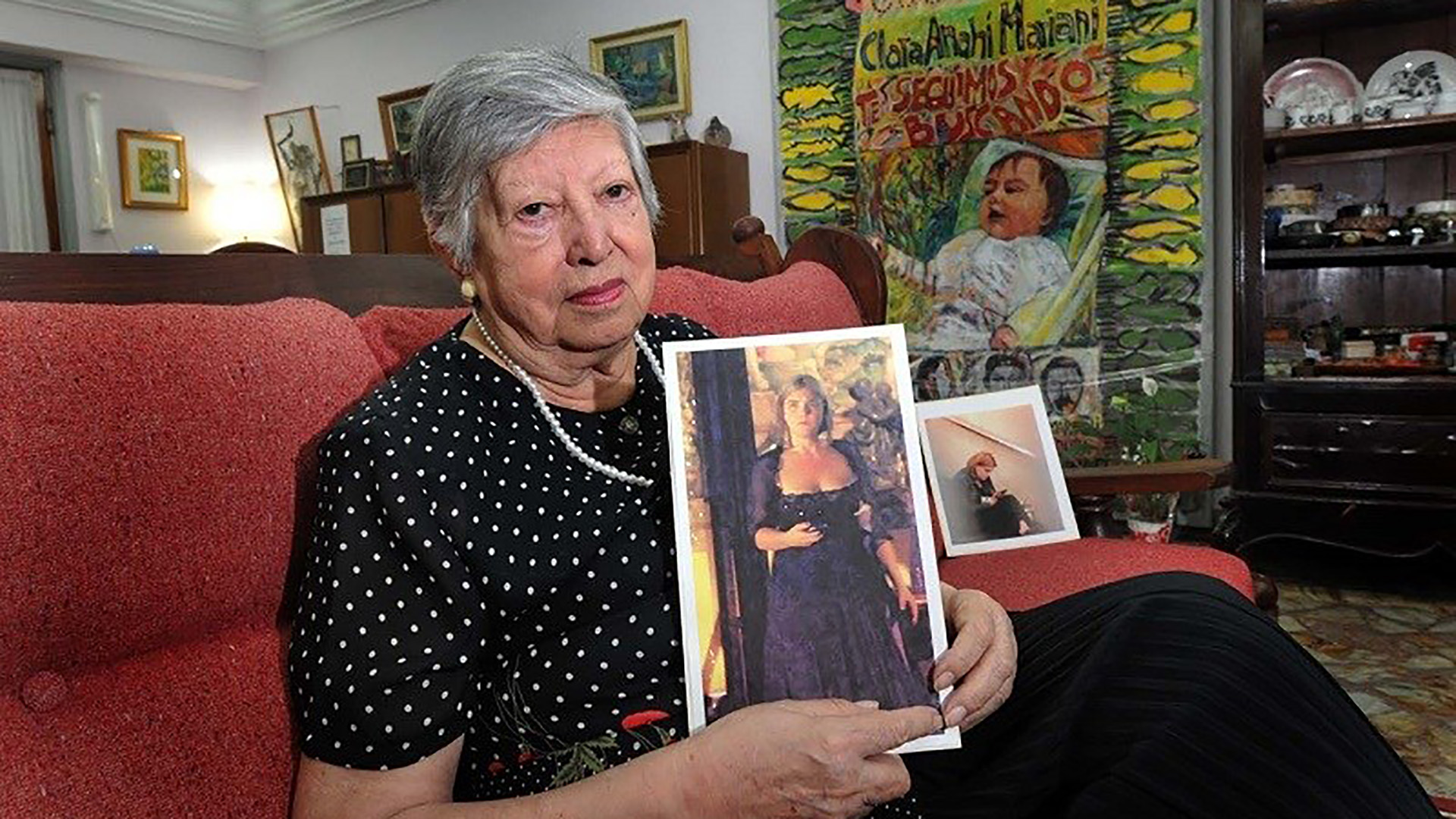 Chicha Mariani with a portrait of her daughter Diana Teruggi and, behind her, her kidnapped granddaughter after the operation where her mother was killed

The mockery against Chicha Mariani

The episode of the piece of paper with the handwritten name of Jorge Julio López, although it is the best known, was not the only one in which Etchecolatz made fun of the relatives of his victims.

Three years earlier, in 2011, also sitting on the defendant’s bench in another trial, he asked for the floor and assured that he could “provide data and evidence on the fate of (Clara) Anahí Mariani”, the missing granddaughter of the founder of Grandmothers of Plaza de Mayo, Chicha Mariani.

The announcement aroused expectations, but it was another of his cruelties. If anyone could know the fate of Chicha’s granddaughter, it was Etchecolatz, who had personally directed the operation of November 24, 1976, during which the girl, just 3 months old, was kidnapped after the death of her mother, Diana Teruggi, and of four other militants who were in the house on Calle 30 between 55 and 56 in La Plata.

When the court asked him to provide this information, Etchecolatz refused to testify further. He didn’t say anything else.

“I have no doubt that he knows everything because he was up there on the roof of the neighbors with other police officers. He knew everything that was happening, he was there together with Camps on top of the roof, in the middle of the attack on the house, I know that he knows, he has an obligation to know because he was one of the bosses. It is so perverse that words are not enough for me to say what I feel in this regard. It is like the final dagger that is plunged into the heart of a person,” said a desolate Chicha Mariani after that hearing. 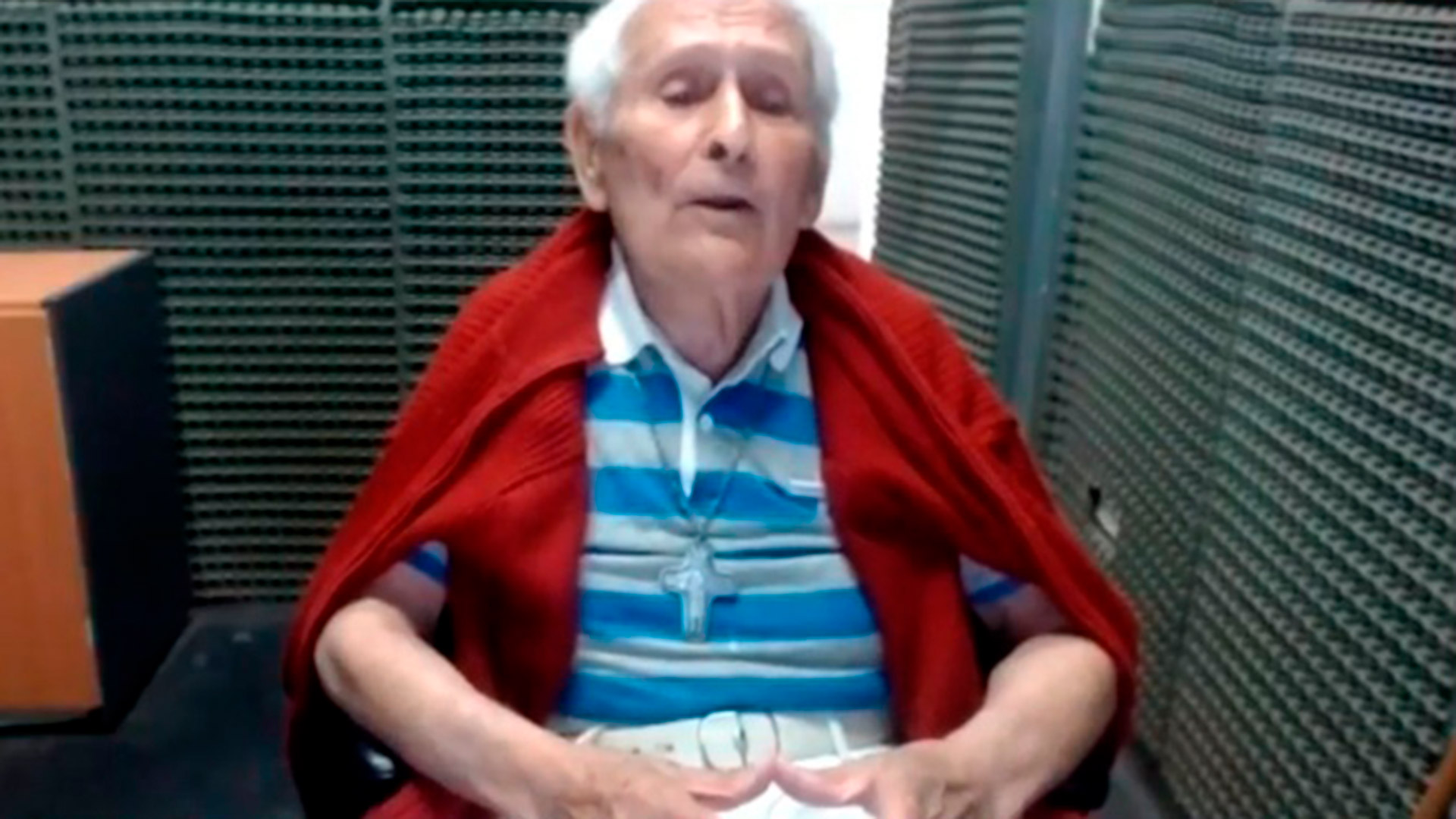 Etchecolatz in one of his last appearances. He enjoyed making fun of his victims and died without giving information about the fate of the disappeared who passed through the concentration camps he commanded.

The last public appearance of Miguel Etchecolaz was on March 11 of this year, in front of the Federal Oral Court 1 of La Plata, which judged him for crimes in Pozo de Arana.

There he unfurled a pennant with the colors of the Ukrainian flag and said: “I am the victim of a trial of revenge and cruelty.”

During his statement, Etchecolatz compared Russia’s invasion of Ukraine with the last military dictatorship, when -according to him- it was intended to “install communism as they are doing in Ukraine”.

And he ended, pompous and defiant: “History and God will absolve me.”

Miguel Etchecolatz will remain in memory only as one of the main perpetrators of the systematic plan of disappearance of people of the last dictatorship, but also as the genocide who never repented and continued to mock his victims until the last of his days.

“He died without saying what happened to my old man”: the message from Julio López’s son after the death of the repressor EtchecolatzThe repressor Miguel Etchecolatz diedChicha Mariani, an ordinary woman, an extraordinary life and the search for her granddaughter that death cut short