Police have been looking for Kaitlin Armstrong for 43 days. The 34-year-old yoga teacher and former gravel rider (a mix of road cycling and mountain biking, ed.) was subject to an international arrest warrant after a brutal murder shook the hip American world of gravel bikes.

All the while, the police were in the dark as to where Armstrong might be. But on Wednesday afternoon, her luck ran out when she was arrested by police at a hostel in Santa Teresa Beach, Costa Rica. It is not clear how he found her. The officers at the scene determined that Armstrong had used a false passport to fly from Newark to San Jose, Costa Rica, on May 18. A week after the murder of which she is suspected, and the day on which the last images of her were taken.

The arrest can be seen in a photo from the Costa Rican Ministry of Public Security. It shows that Armstrong had dyed her hair brown in the hope of not being recognized. According to the American police, that was not her only disguise: she also had plasters on her nose and bruises under her eyes, after an alleged accident while surfing. “She looked different,” said the source of The Daily Beast.

The drama took place on May 11 in sweltering Austin, Texas. In a friend’s house, the police find the shot Anna Moriah ‘Mo’ Wilson (25). Help is no longer of any use: the woman dies on the spot. 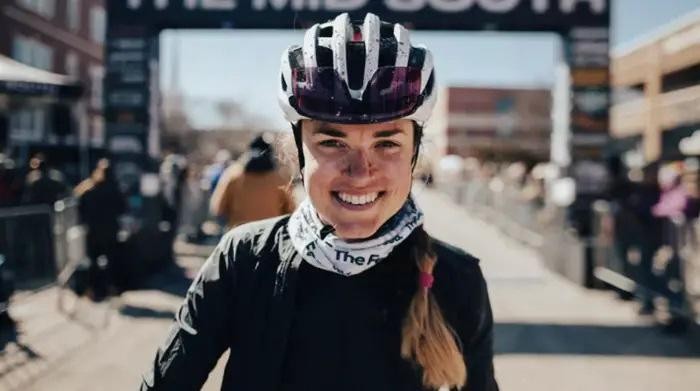 The tight-knit gravel community is in shock. At the next match none of the winners at the finish line raises their hands. After all, Mo’ Wilson is a welcome figure, with an exceptional story. “She came into the gravel scene like a comet,” said Dutch gravel rider Laurens Ten Dam earlier in his podcast Live slow, ride fast. “She worked in the office as a buyer of bicycle frames. Pretty boring work for a former promising alpine skier. But then she got an injury, started cycling and proved to be particularly good at it.”

“Many people had a soft spot for her and her story,” said Ten Dam. The American gravel topper Colin Strickland (35) also proved not insensitive to Mo’ Wilson. The two had a brief relationship at the end of last year. But a little later, Strickland and his former girlfriend Kaitlin Armstrong got back together.

Back to May 11 in Austin. In the afternoon Colin Strickland shows up at Mo’ Wilson’s guest house, who would participate in the clay court game Gravel Locos a few days later. Wilson jumps on the back of his BMW motorcycle. The two go to a public swimming pool nearby, then have something to eat together. “Just as friends,” Strickland repeats several times later. Although texts from him appear afterwards in which he does not tell Kaitlin that he has agreed with Mo’ that day.

Surveillance cameras near the house where Mo’ Wilson is staying, record how Strickland drops Mo’ back to her guest house on the evening of May 11, then a black Jeep – Armstrong’s – turns into that same street. Shortly afterwards, Mo’ Wilson, who had been shot down, is found in a large pool of blood at her guest house.

Laurens Ten Dam tells in his podcast how he was at Strickland’s home late at night when the police said that Kaitlin Armstrong was probably behind the murder. There was the surveillance footage. And through a tip, police learned that Armstrong had reacted particularly angry and threatened several times when she learned that her boyfriend and Mo’ Wilson had reconnected.

The police arrested Armstrong, but had to release her due to a procedural error. The last detectives saw of her was a surveillance image at the Austin airport of a woman with a yoga mat on her back. That was made on May 18, a week after the murder.

New details that have surfaced in the meantime have revealed that Armstrong sold her black jeep at a car dealership two days after Wilson’s murder, before taking a plane in Austin on May 14. Investigators say she flew from there to Houston, then New York, then Newark, and finally, a day after a warrant was issued against her, to Costa Rica.

She is now being extradited to the US, where she will face charges for the murder of which she is suspected.