Global warming is not uniform across the planet. In some places in the Arctic Ocean, it can be seven times faster than that seen on average on an Earth scale, according to new data published in mid-June in the journal Scientific Reports (in English). Franceinfo explains the reasons for this phenomenon and its consequences.

An above-average temperature rise in the Barents Sea

This extremely rapid warming of certain areas of the Arctic has been observed by researchers through the collection and analysis of new data. The phenomenon particularly affects an area in northern Norway and northwest Russia. “The region around the northern Barents Sea is experiencing warming 2 to 2.5 times greater than the Arctic average, and up to 5 to 7 times greater than the global average,” says Norwegian climatologist Ketil Isaksen, lead author of the study. The data also shows that the air temperature in the northeast of the Svalbard archipelago has increased by more than 5°C over the past twenty years. The climatologist shared on Twitter a map of the areas concerned.

In our new study in @SciReports we identify a record-high observed warming of up to 2.7 °C per decade over the Barents area https://t.co/sa81LzHlCc
Thread ⬇ pic.twitter.com/sPyZ8t8BbM

A retreat of the pack ice which does not help

“We might tend to imagine the Arctic as a homogeneous zone, but this is not at all the case, notes climatologist Jeanne Ghérardi-Scao. The Arctic is very vast, with continental zones, oceanic, coastal areas.” The regions affected by this strong warming are “transition zones”, notes climatologist Gerhard Krinner. They lie on the edge of the sea ice – the pack ice – and are under the influence of the Atlantic Ocean, which brings warmer water. Jeanne Ghérardi-Scao also evokes an “Atlantification” of the “Barents Sea”.

Usually the pack ice acts as an insulating blanket. White in color, it reflects solar radiation and prevents the water from overheating. But the influx of warmer water from the Atlantic delays the formation of sea ice in the Arctic, especially in autumn. However, sea ice is receding: over the past fifteen years, it has reached the lowest levels recorded since the beginning of the 1980s.

What follows is a vicious circle. Due to the warming of the water and the air, the pack ice shrinks and forms later in the season. It therefore protects cold Arctic water less from the sun’s rays. This in turn warms up, which further reduces the pack ice… “You will have a local amplification of the warming in this limit, transition region”, describes Gerhard Krinner.

“With less and less sea ice, these regions can store more heat, and release more of it back into the atmosphere.”

A trend observed for a long time

The fact that the poles are warming faster than elsewhere on Earth was already known: the Arctic is considered a “climate sentinel”, a region very sensitive to warming. Franceinfo published several infographics in March showing that this area was warming up two to three times faster than the rest of the world. 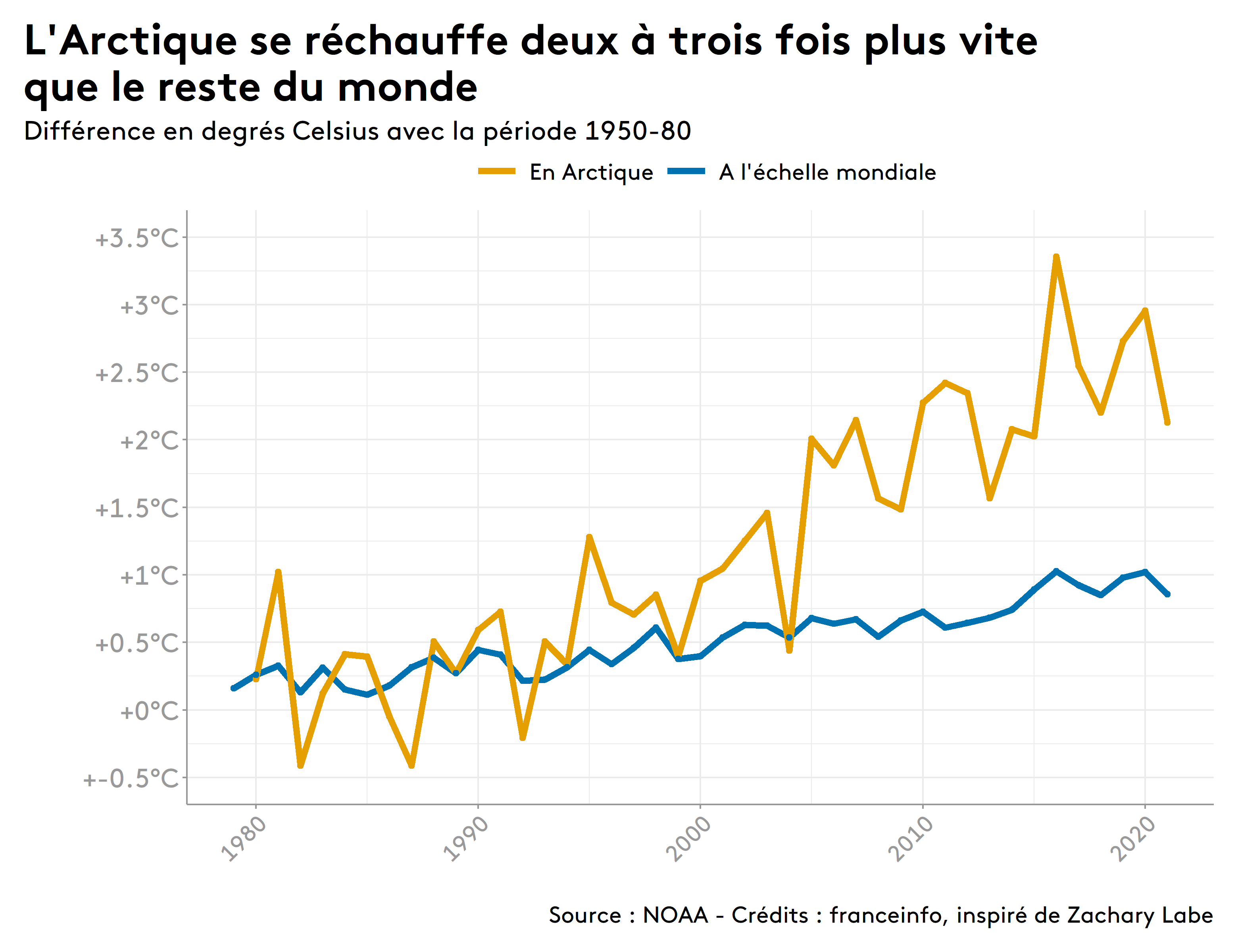 “The magnitude of the warming recorded here only confirms what we have known for more than twenty years”, comments Jeanne Ghérardi-Scao. The expert recalls that previous Arctic studies (in English) reported particular temperature rises in certain areas of this region. But the data published in Scientific Reports still challenge climatologists.

“It’s not a very big surprise but +2.7°C is really impressive. In general, global warming is absolutely exceptional.”

An impact even in our latitudes

The extent of the phenomenon shown by these new data is linked to the “very singular context of the Arctic”, assures Jeanne Ghérardi-Scao. But the climatologist warns: the significant warming in the Arctic has “multiple consequences on sea level and on the transport of air masses in our” more temperate latitudes. However, France and Europe are already suffering from the consequences of global warming.

The study certainly does not deal with the melting of the ice cap, this freshwater glacier which notably covers part of Greenland. But the disappearance of the pack ice and that of the ice cap are two “entangled” phenomena, emphasizes Jeanne Ghérardi-Scao. The disappearance of this glacier “contributes a lot” to the rise in the level of the water. Overall, the sea has risen by 9 cm in 30 years, and this is likely to increase: if our greenhouse gas emissions continue to increase at the current rate, the rise in sea level will be around one meter in 2100, according to IPCC experts.

Arctic warming also has an impact on the air masses reaching Europe: these are more humid, which causes heavier rains and heavier snowfalls. The large amounts of snow that fell in Europe in 2018 are directly linked to “abnormally warm” waters in the Barents Sea, according to a study published in April 2021 in Nature Geoscience (in English). This type of phenomenon is also likely to increase over the decades, paralyzing the continent’s transport and infrastructure. “What happens at the polar level has repercussions for us”, insists Jeanne Ghérardi-Scao.

AMLO is stronger than ever: Sheinbaum

The basic basket in Chile rises in July to a historical 20.6% year-on-year