It’s a huge feat. Alize Cornet (37th in the world) eliminated the best player in the world in the 3rd round of Wimbledon, this Saturday. The 32-year-old Frenchwoman crunched the Polish Iga Swiatek in two sets (6-4, 6-3) and 1h31 of play. She will face in the round of 16 the Australian Ajla Tomljanovic (44th), victorious over the Czech Barbora Krejcikova ( 13th). 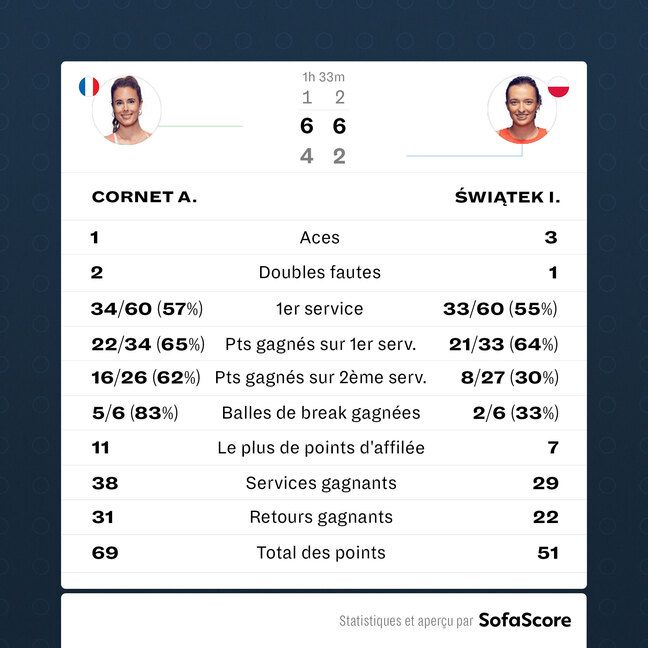 The figures of the feat, provided by our partner SofaScore – SofaScore / 20 Minutes

The winner of the last Roland-Garros remained on 37 victories in a row. Swiatek (21) had not lost a match since her elimination in the second round in Dubai in February and had won the six tournaments she has played since: Doha, Indian Wells and Miami on hard court, Stuttgart, Rome and Roland- Garros on clay.

🇲🇫 CORNET DOES THE EXPLOIT 🚨🚨

EARTHQUAKE. Alizé brings down the greatest series of the 21st century among women and releases the n ° 1 Iga Swiatek which remained on 37 consecutive victories 🤯

While there are no more Frenchmen in the men’s draw after the elimination of Richard Gasquet, dominated this Saturday by the Dutchman Botic Van De Zandschulp in four sets (7-5, 2-6, 7-6 [7]6-1), three Tricolores remain in contention on the women’s side.

Three French women in the round of 16, no French

Besides Cornet and Caroline Garcia (qualified yesterday), Harmony Tan was invited for the first time at this stage in a Grand Slam tournament. The 115th player in the world crushed the English guest Katie Boulter (118th) in two sets and 50 short minutes (6-1, 6-1).

She will challenge the American Amanda Anisimova (25th), who fell for her compatriot Coco Gauff, the unfortunate finalist of the last Roland-Garros. Garcia (55th in the world) has an appointment on Sunday with the Czech Marie Bouzkova (66th).