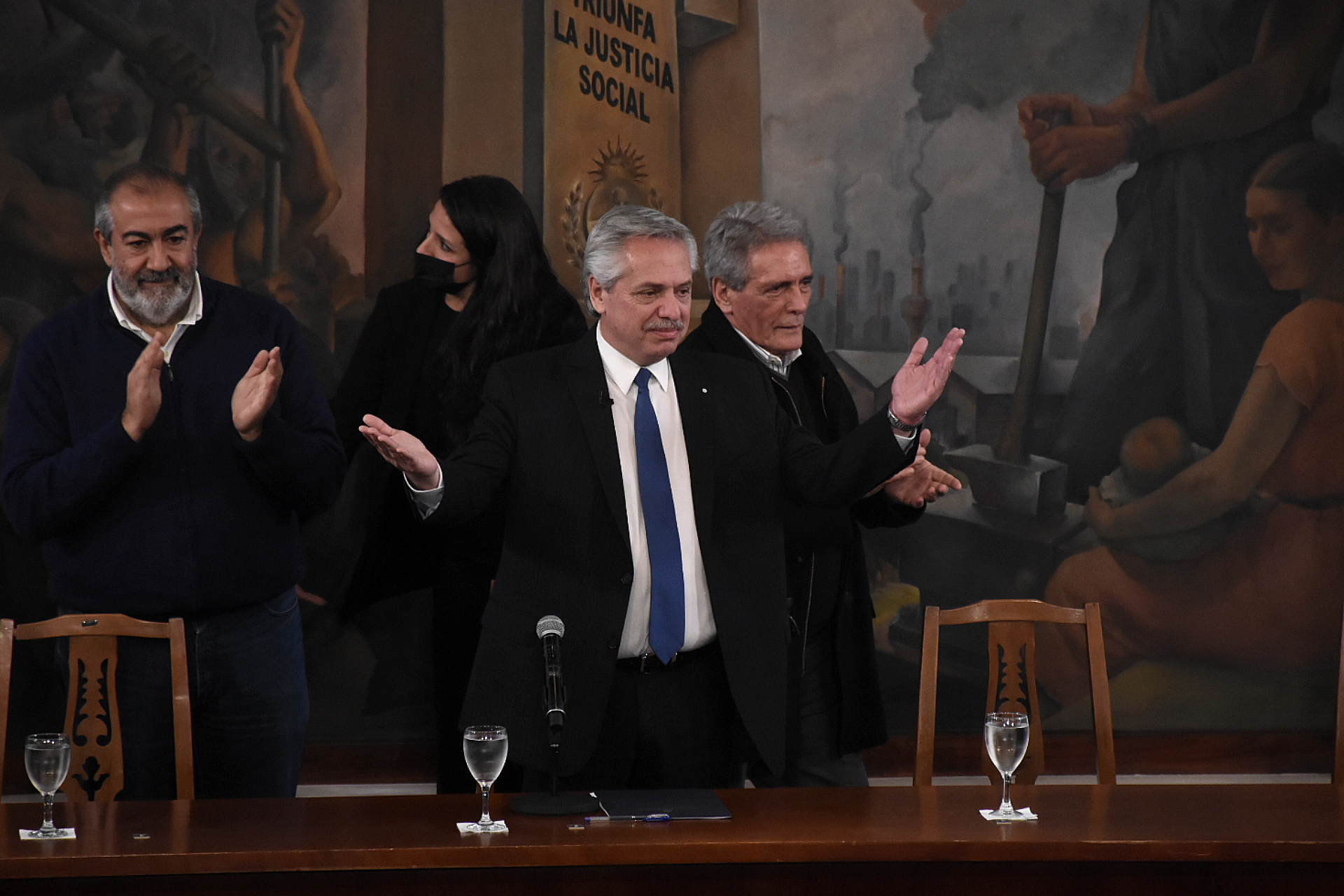 In some offices of the Casa Rosada and related buildings it was rumored this week that Alberto Fernández’s speech this afternoon would be “hard”, but there were some doubts. In general, the President decides on the time and prints changes in the direction of his actions according to variables that only he knows. This time, despite the questions about the financial shock and pressure from Kirchnerism in recent days, he did not disappoint his own when it came to providing definitions internally, although he insisted on the need for unity in the Front of All .

Emboldened by the voluminous convocation that took place in the Felipe Vallese room of the CGT and which contrasted with the low expectations in the previous days, the President dispatched himself with a charged and very direct message in response to Cristina Kirchner, who had asked him to “use the pen”; she released economic data to defend her management; and he even drew a comparison between her person and Juan Domingo Perón. The fiery content of his words increased expectations around the act that the vice president will lead tomorrow in Ensenada -also- for the 48th anniversary of the General’s death, where a new rain of criticism is expected.

The event began after 6:15 p.m., more than an hour later than expected, as the President usually does. It took place in a room set to music from the outside by the roar of the drums that struck the scarce 200 militants of the UOCRA, the Labor and Equity Party (Part) and the Food Union, who had gathered at the corner of Azopardo and United States, despite the rain, to add some liturgical framework to the event that took place, indoors, with some 350 leaders. 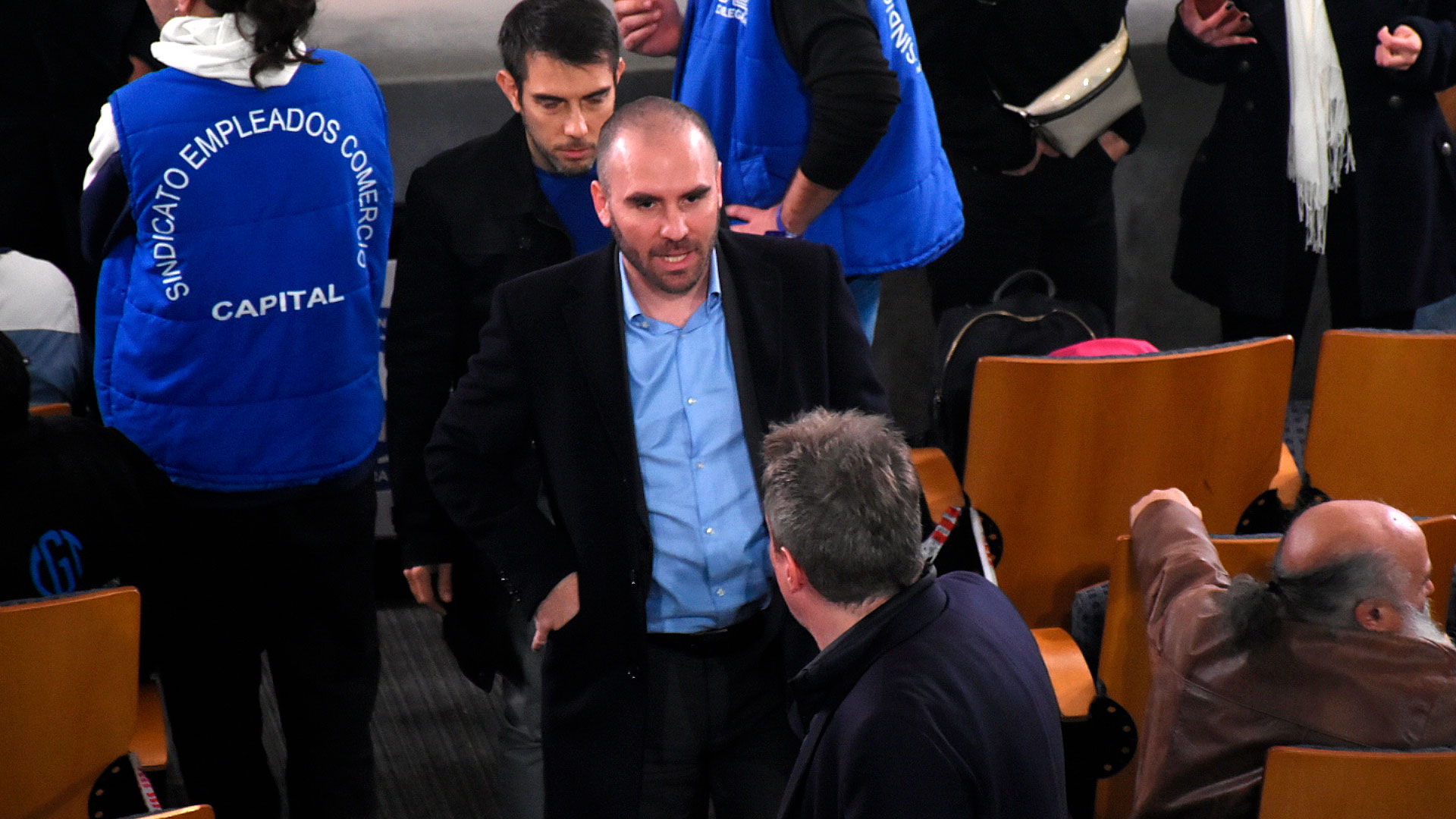 Martín Guzmán, the main one targeted by Kirchnerism, was in the second row with the rest of the ministers

In the previous one, Alberto Fernández gathered for less than half an hour, in a separate room, 50 of them, the most important, related and dissidents. Among them, ministers, governors, mayors, union leaders and social movements. Although without Sergio Massa, the president of the Chamber of Deputies, the third founding member of the Frente de Todos, who has been pressing, together with Cristina Kirchner, to take charge of the economic area of ​​the Government. People around him said that he had an activity in Malvinas Argentinas, which had started at noon.

The message that he gave to the leadership, as Infobae was able to reconstruct, was of gratitude, and had no weighty political content. “We were many, there was no space for the thread”, justified one of them. The speech that the president gave later was more forceful, and surprised several who expected another request for unity. After singing the Peronist march together, the President took several minutes to make, in a calm tone, a historical account of Perón’s political journey in front of the only microphone on the desk that he shared on stage with Daer and Acuña. After a few minutes, he gained momentum and raised the modulation, referring to the General’s “herviborous” time.

“(… in 1973) we had to end the divisions. (Perón)‹ spoke with radicals, and hugged (Ricardo) Balbín. It was a clear message of unity (…) he told us: `Put down your weapons’. And he summoned the people for that. They asked him not to act that way, they asked him to confront. And he told them no, that they had to be persuaded. And I stick with that phrase, because politics is nothing more than persuading the other”, he said, with vigorous vigor in his voice, and received the first applause of the night.

Then he turned to the central point of the speech: the response to Cristina Kirchner: “Power is not about seeing who has the pen, but who has the possibility of convincing the other to carry out a task. Perón never needed a pen. We have to remember those teachings, because the values ​​that Perón spoke to us about are the ones we have, beyond the temporary differences. The same thing I said on December 10, 2019, the last ones first, the people first, Perón could have said it, ”she compared.

Later, he returned to the fray in the same anti-establishment line, contrasting his style and that of the vice president. “I do not give great acts, nor great speeches. But Argentina grew more than 10 percent; we generated more than one million two hundred thousand formal jobs…”, she said, and continued with a detailed list of management achievements, especially of an economic nature. 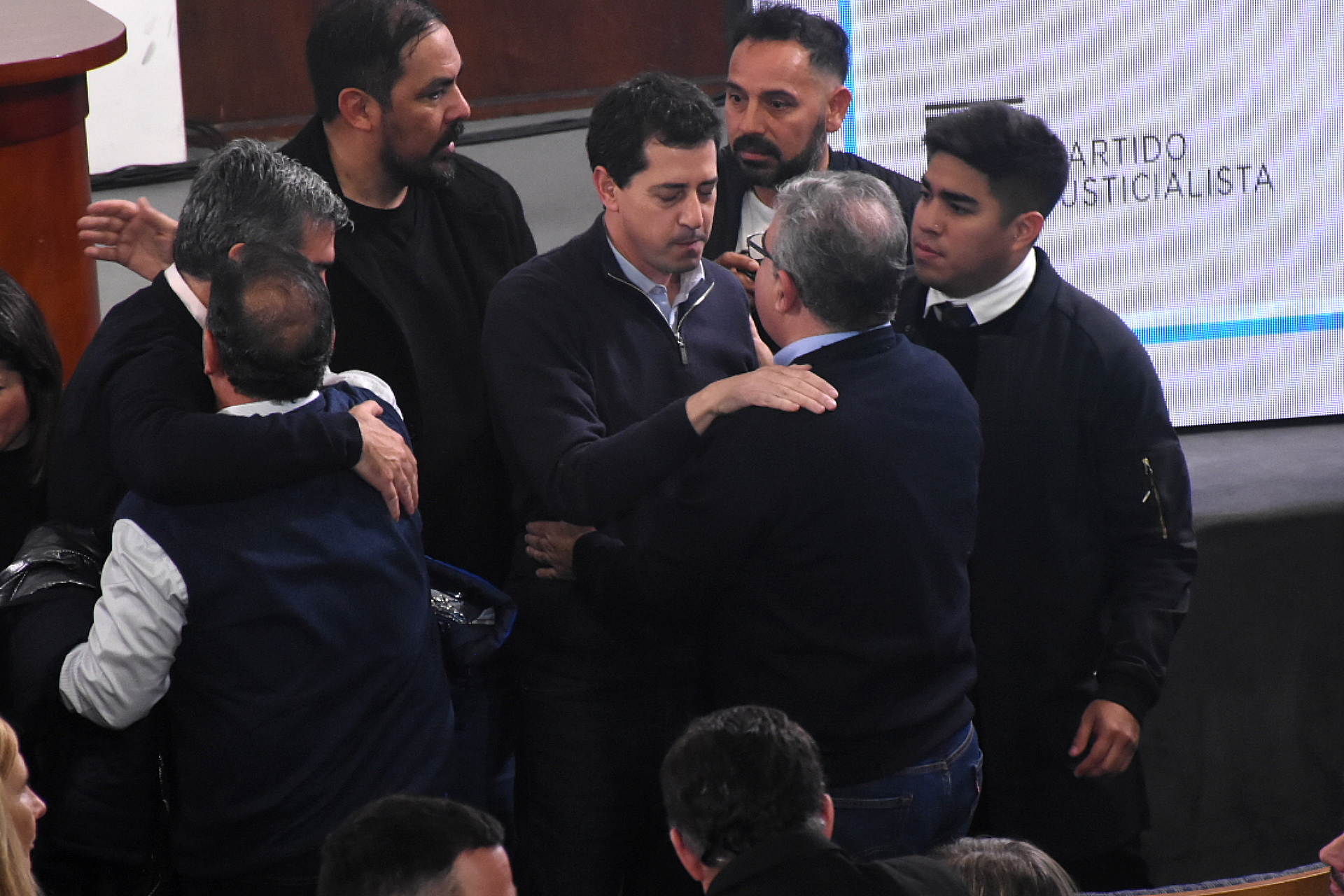 At the end of the act, many leaders wondered what Cristina Kirchner’s response would be to the -perhaps- more blunt confrontation of the President before the front page of the leadership of Peronism. “She has the characteristic of surprising, and going to places that are not expected”, she avoided venturing options, last night, a minister close to the President, with some concern.

This afternoon’s call was the largest that an act headed by Alberto Fernández had since December 2021. Although his last presentations were characterized by the scarce intervention of governors, mayors and unionists, this time, the panorama improved. Although several important leaders close to the president attributed it, as they quickly left the building, to the date and place.

The act was carried out in peace, although in the previous one, discouraging prognoses had circulated in the mouths of several leaders, based on the serious noises that appeared between the CGT and the Presidency during the last days. Despite the fact that Alberto Fernández is the president of the PJ, a part of the union leaders resisted, albeit quietly, being “taken over” by the act. Although some versions, coming from the Government, sought to soften the inconveniences, and indicated that the short circuits began only because Héctor Daer, the main ally of the President in the union central, had invited him without previously consulting with the other two members of the leadership , Carlos Acuña and Pablo Moyano, who would have been upset when they found out that the Presidency was calling without their consent.

Be that as it may, finally, after some talks to cool down the cegetista unrest, Alberto Fernández was able to disembark at the historic headquarters of Azopardo, and was received by the front page of trade unionism. Except for Pablo Moyano, who remained annoyed and left with notice, there was his father, Hugo -his presence surprised more than one-; Daer (Health), Acuña (service stations), Andrés Rodríguez (UPCN), Gerardo Martínez (UOCRA), José Luis Lingeri (Sanitary Works), Armando Cavalieri and Carlos Pérez (Commerce), Rodolfo Daer (Food), Jorge Sola ( Seguro), Sergio Romero (UDA), Antonio Caló (UOM), Mario Calegari (UTA), Argentino Geneiro (gastronomic), Juan Pablo Brey (aircraft), Juan Carlos Schmid (dredging and buoyage), Carlos Sueiro (customs) and Alejandro Love (municipal Buenos Aires), among others. 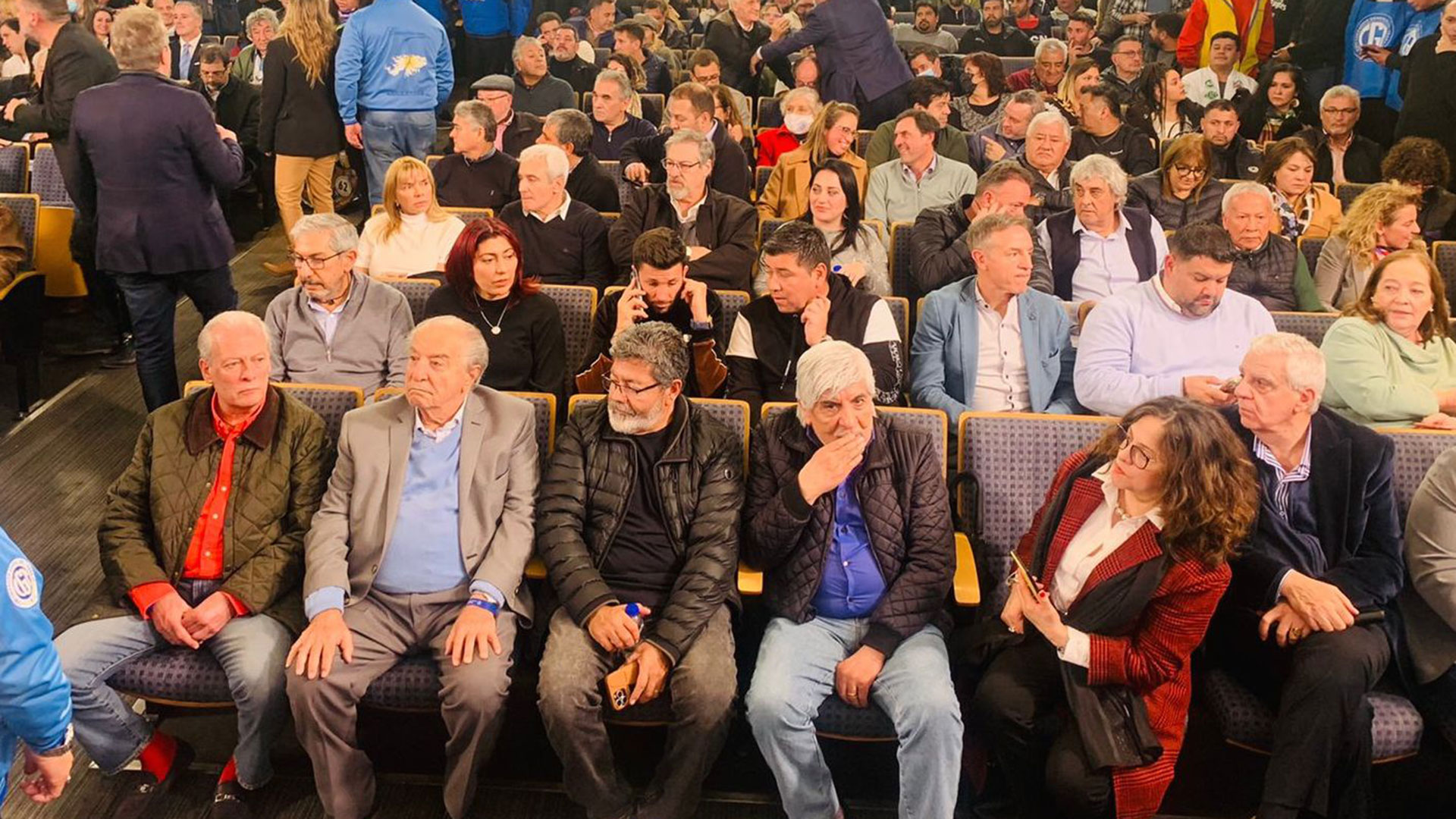 Gerardo Martínez and Hugo Moyano, in the front row

Despite the historical date and the role of the CGT, Alberto Fernández was unable to gather, as expected, the bulk of the governors, who in recent weeks have deepened their criticism of the government -especially for the economic situation- through the newly formed “league” in which they agglutinated. But the five who were there managed to please the “Albertists”, who are eager to add support in the fight with Cristina Kirchner. After all, there were four more than at the UOCRA event two months ago, where only Sergio Uñac from San Juan was present.

The presence of two provincial chiefs stood out: Axel Kicillof from Buenos Aires, lately critical of Alberto Fernández, and Jorge Capitanich, from Chaco, because they attended despite their flagrant alignment with the vice president. There were also two members of the pure PJ in the Norte Grande, Raúl Jalil, from Catamarca, and Ricardo Quintela, from La Rioja, a regular at the Government House and with a good relationship with the president. And Tucuman Osvaldo Jaldo, who competes internally with the chief of staff, Juan Manzur. Omar Perotti from Santa Fe, Gustavo Melella from Fuegian and missionary Oscar Herrera Ahuad were also expected to be there, but there was no success with them.

He also managed to concentrate a good part of the national Cabinet in the seats, including the representatives of Kirchnerism Eduardo “Wado” de Pedro (Interior) and Martín Soria (Justice), who went with the spirit of defending “institutionality” beyond the fight political-electoral that pushes with President Cristina Kirchner. As expected, there were the albertista bishops, Juan Zabaleta (Social Development) and Gabriel Katopodis (Public Works). As well as “liberos” such as Matías Lammens (Tourism) and Juan Cabandie (Environment). Martín Guzmán (Economy) was also the main one pointed out by Cristina Kirchner, whom the President once again defended this week from the pushes of Kirchnerism (to which Massism recently joined). 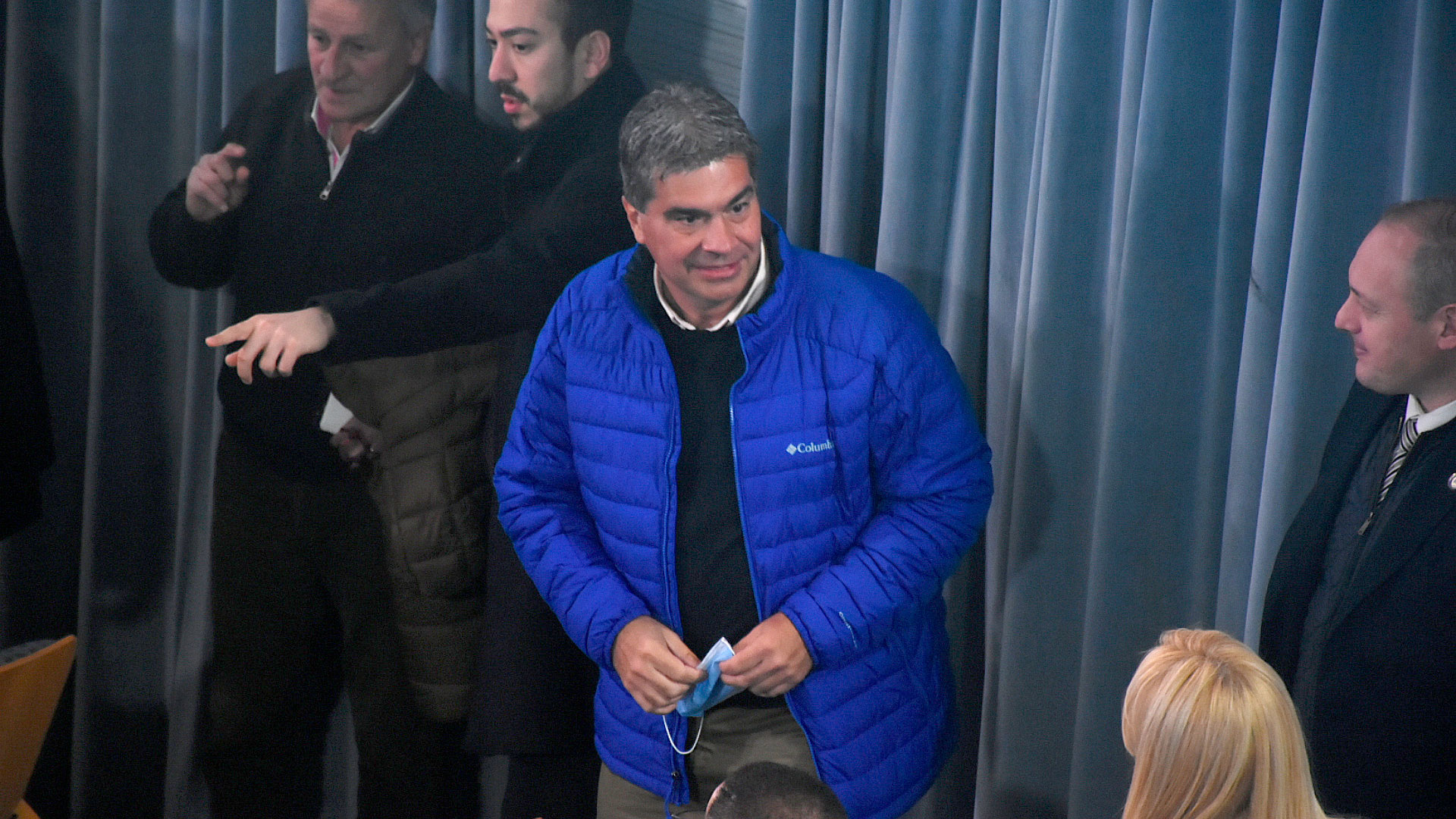 Jorge Capitanich, one of the few governors who said present

It was foreseeable that the closest deputies would be there, like Victoria Tolosa Paz, and the heads of the social movements related to the President. That’s how it went. The Buenos Aires leader sat in the second row, as did Emilio Pérsico, from the Evita Movement, and Daniel Menéndez, from Barrios de Pie. Although the absence of Fernando “Chino” Navarro, the only social leader with an office in Casa Rosada, one of the main swords of the President in front of La Cámpora, drew attention. People around him said that he had planned to go, but he was late.

All those present avoided speaking to the press at the exit, except for a few, such as Daniel Menéndez, who recalled the differences of recent days after Cristina Kirchner’s attack on the leadership of the social movements. And former picketer Luis D’Elía, who celebrated the forcefulness of the speech. “I loved it,” he said. The rest, whether Kirchnerist, Albertist, trade unionist related to one sector or another, official, or deputy, chose to preserve his opinions. “The President has already spoken,” said the head of Labor, Claudio Moroni.

“I do not do great acts or give great speeches”: Alberto Fernández’s three messages against Cristina KirchnerVolodimir Zelensky thanked Alberto Fernández for his humanitarian aid and condemnation of the Russian invasion