The war in Ukraine dominated the six months of the French presidency of the European Union, but what could have slowed down its priorities played an accelerating role for several issues such as defence, energy transition or migration. We recap ‘the outstanding files of this presidency before the handover, this Friday, to the Czech Republic.

Energy or hitting Moscow in the wallet

Six sanctions packages against Russia have been adopted in record time since February and the start of the war in Ukraine. And the Europeans have for the first time decided to drastically reduce their dependence on Russian fossil fuels in order to dry up the Kremlin’s sources of income. Paris has been maneuvering to forge compromises, multiplying meetings in Brussels with the aim of displaying the unity of the 27 against Moscow.

Coal imports are to cease in August and an embargo within six months on most oil deliveries was decreed in June. For Russian gas, which is more difficult to replace than black gold, joint purchases are envisaged as well as a commitment to diversify supplies.

The Twenty-Seven mobilized with rare unity and speed to welcome refugees from Ukraine. A week after the launch of the Russian offensive, the EU granted them a temporary protection status never used before, which gives them rights in terms of housing, employment, social protection, health and ‘education.

The reaction sparked accusations of unequal treatment among refugees. But this cohesion of the 27 on such a sensitive subject has also revived the hope of unblocking the difficult reform of European asylum policy.

Progress was made in June when 21 EU Member States or associates adopted a mechanism – voluntary and temporary – providing for the relocation of asylum seekers or a financial contribution to the countries of the Mediterranean basin. The 27 agreed at the same time on a reinforcement of the control of people at the external borders.

For the first time in their history, EU countries have decided to equip themselves with a rapid intervention military force of 5,000 combatants capable of carrying out “combat operations”. It must be operational by 2025 to act where NATO cannot intervene.

EU members also pledged at a summit in Versailles in March to “substantially increase their defense spending” in order to “increase their ability to act autonomously”. They have undertaken a massive rearmament and want to Europeanize the purchases of equipment which they lack (drones, tanks, anti-aircraft and anti-missile defense systems).

France had made it “a priority”: the Twenty-Seven agreed this week to ban the import into the EU of six products (soya, beef, palm oil, wood, cocoa, coffee) when they contribute to deforestation – but not including rubber or other threatened ecosystems. Accelerated negotiations after the Commission’s proposal unveiled in November 2021.

The French presidency also snatched a compromise on the key texts of the EU climate plan: the end of the sale of thermal engine cars in 2035 – despite strong resistance from Italy and the Germany-, the reform of the carbon market and the social climate fund, overcoming the differences between “frugal” (Germany, Scandinavian countries, etc.) and Eastern and Southern European states. 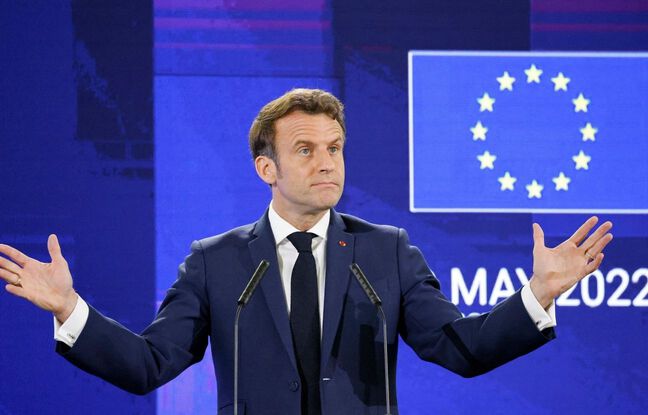 Emmanuel Macron in front of the European Parliament on May 9, 2022. – Ludovic MARIN / AFP / POOL

Victory over the tech giants, failure on taxation

The EU concluded historic legislation in the spring to bring order to the Wild West of the Internet and finally tackle the excesses of power of the big digital platforms, such as Facebook (Meta), Google or Amazon. French commissioner Thierry Breton, who piloted the project with the vice-president of the European executive Margrethe Vestager, succeeded in countering intense lobbying by the American giants to complete the project in a year and a half, a performance for a file of this magnitude.

Our dossier on Europe

The two-part plan (DSA and DMA) includes measures of unprecedented firmness, which will be implemented on a European scale and could be used as a model. It compels platforms to remove illegal content online and cooperate with authorities, ending lawless zones on the internet. It also represses anti-competitive practices and must help the EU to bring out European champions.

The French presidency, on the other hand, failed to transpose into European law the minimum tax of 15% on the profits of multinationals, one of its priorities. It came up against the opposition of Poland and then that of Hungary on this file requiring unanimity.

The luxuries of Benjamín Agüero in the first tournament he won with Tigre: dribbling between two and the definition penalty

Security in Jalisco: They find a corpse next to the bullring in Tlajomulco