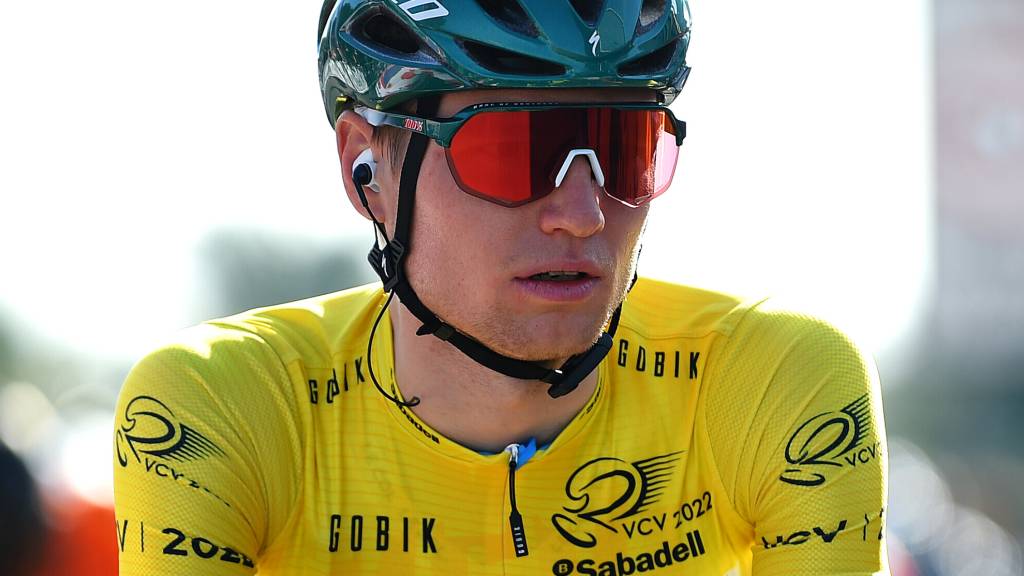 At the end of Bora-hansgrohe’s press conference, the elephant in the room was named. Participants in the online interview with the cycling team that starts today in the Tour de France, were allowed to ask questions via the chat to Aleksander Vlasov, leader of the German formation. And Russian.

Which is why people naturally wondered: how does Vlasov feel about the conflict in Ukraine and did he ever fear being excluded from the Tour, as happened to his tennis compatriots at Wimbledon?

And then this happened. Could Vlasov still be asked about the Russian conflict? The answer from Bora’s press officer was clear: “No… thank you.” 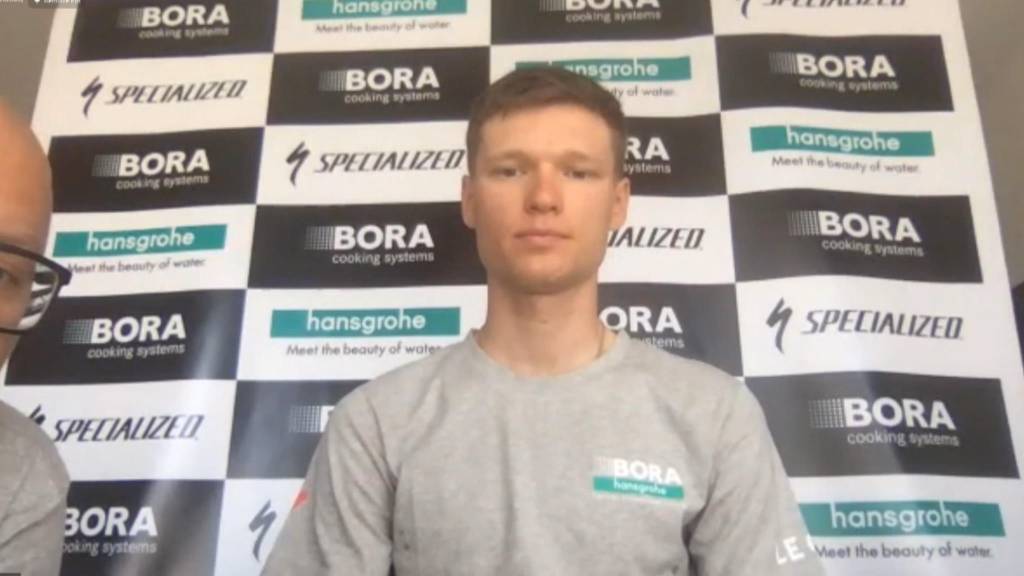 ‘Don’t mention the war’: Vlasov does not talk about conflict in Ukraine

Of course, the war is sensitive to the best Russian cyclist of the moment. He now lives with his wife and dog in Monte Carlo, but his parents and family still live in Vyborg, a town a stone’s throw from the border with Finland.

It is logical that Vlasov prefers not to get burned by the issue. Just like his team, by the way.

Not that Vlasov has not spoken out at all. Shortly after the Russian invasion of Ukraine, on March 3, he left this message on Instagram. “I, like many Russians, just want peace. I’m not a political person and normal people like me were not asked if we wanted a war. It came as a shock to me and I hope it ends as soon as possible.” 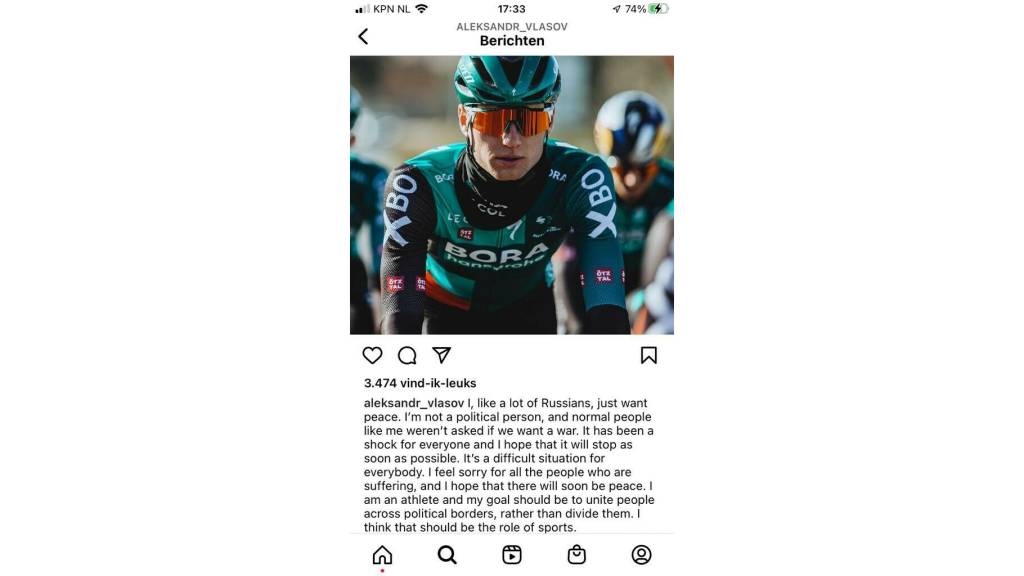 Shortly after the Russian invasion of Ukraine, Aleksandr Vlasov took to Instagram about the war: ‘I just want peace’.

Vlasov still spends his holidays in Russia. He spent his childhood in Vyborg, coincidentally also the city that produced cycling champions such as Vyacheslav Ekimov and Yevgeni Berzin. In addition, Vlasov took his first steps as a professional rider with Gazprom-RusVelo, the team that has been banned by the UCI since the Russian invasion.

And so he was quite worried whether he would be allowed to participate in the Tour de France. “People ask about it, but I also don’t have an answer to the question of what the solution is,” Vlasov was candid in conversation with Wieler Revue at the beginning of May. “I have to say that I have become more afraid that I will have to miss the Tour because of something that is not in my hands. Russian tennis players are also not allowed to participate in Wimbledon. I hope that is not my fate either.”

His way to the top was gradual. As a junior and promise he got a little better every year. In 2018 he already won the Baby Giro, the Tour of Italy for promises. In the Tour of the Future he finished fourth behind an unapproachable Tadej Pogacar, but only a handful of seconds from Thymen Arensman and Gino Mäder.

In the corona year 2020, he had his breakthrough with third place in the Tour of Lombardy, victories in the Mont Ventoux Dénivelé and the Giro dell’ Emilia, and several places of honor. In the Vuelta, the first big round he completed, he finished eleventh. 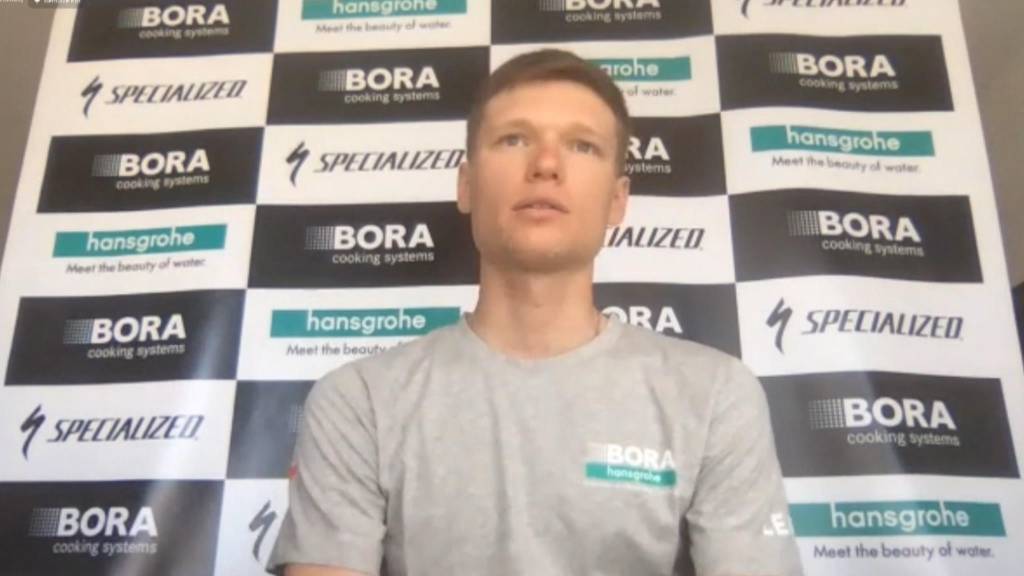 Shadow favorite Vlasov: ‘Some teams don’t think I can win the Tour

Last winter he made the switch from Astana to Bora-hansgrohe and that has done him no harm. In the not very strong Tour de Romandie he rode unthreatened to the overall victory, his first at WorldTour level.

‘The advantage that I have already had corona’

And he was also the big favorite in the Tour de Suisse. In fact, in the fifth stage he sprinted everyone uphill from the wheel and the Russian also took the leader’s jersey, only to wake up the next day with a positive corona test.

Vlasov may now see that as an advantage. “The first day after the test I was worried about the Tour. But when I noticed that I actually had no problems, I started training again at home on the rollers. Perhaps it is an advantage that I have already had corona, the The chances of me getting it now are slim.”

In the shadow of top favorite Pogacar and the Jumbo-Visma duo Primoz Roglic and Jonas Vingegaard, Vlasov might just find his way to the podium.

And who knows, there may be more in it. “Some teams don’t expect me to win the Tour de France,” he confidently said at the Tour’s press conference. “I hope I can fight for the win.”

Specialist in all areas

In the nervous first week, with a lot of fan violence and cobblestones, he can count on Danny van Poppel as a servant. On the Super Planche des Belles Filles, with its unpaved final meters, we will probably see Vlasov in all its glory for the first time. That climb should suit him perfectly, as evidenced by his third place on the Wall of Huy in the Walloon Arrow. 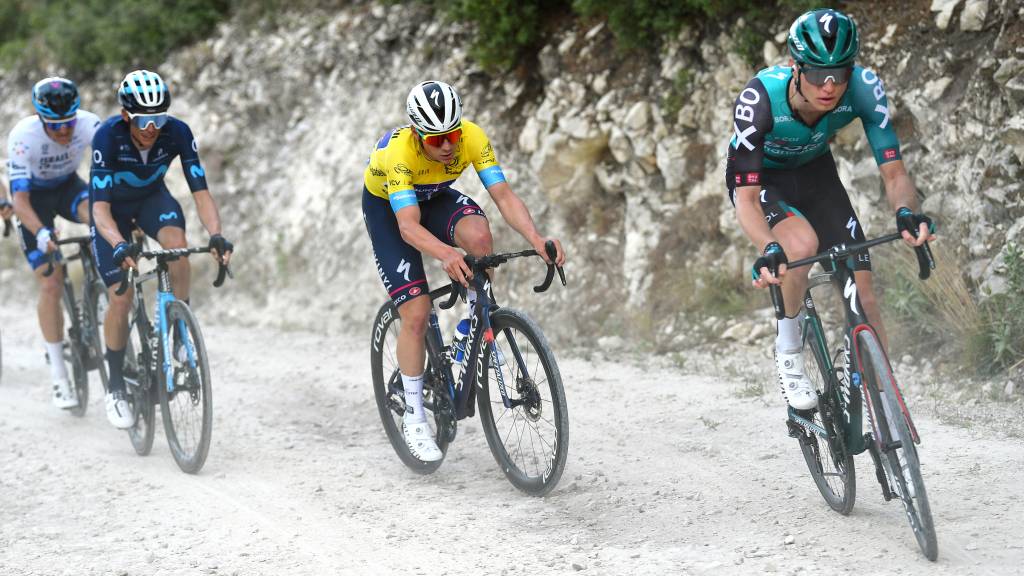 Aleksandr Vlasov drives Remco Evenepoel out of the wheel on the unpaved final climb in the third stage of the Tour of Valencia.

In the high mountains, Vlasov hopes to be able to compete with the best. As long as that doesn’t work like in the Tour of the Basque Country. There he was driven into the final meters of the bike by a clumsy action by Vingegaard.

Vlasov and Vingegaard continued on foot, but Vlasov fought his way to the podium in the final standings.

And now Vlasov, under a neutral flag, is aiming for the podium in Paris. Vlasov was spared exclusion. The same applies to Aleksander Riabushenko from Belarus, who flew in at the last minute.

In his own words, he is not looked at by colleagues for what the leaders of his country are up to. “Not much has changed for me in the peloton,” said Vlasov in Wieler Revue. “People don’t talk to me about the war. And they certainly don’t blame me.”