Should we worry about the French who arm themselves “just in case”? 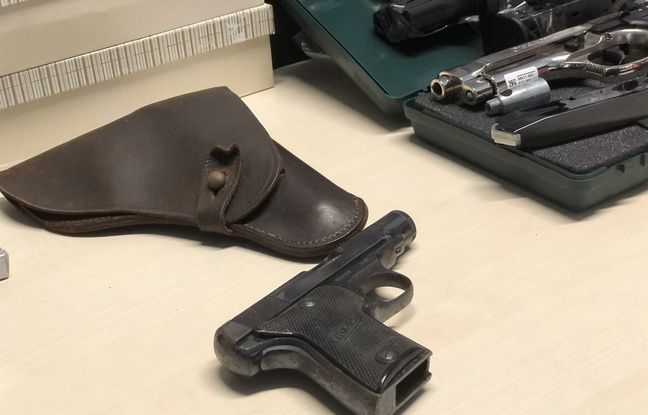 A 22 Long Rifle semi-automatic pistol, a 9 millimeter semi-automatic pistol and an R223 rifle, this is the impressive arsenal that Mitch has acquired in recent years to defend himself against a feeling of insecurity that he judge growing up. In France, 5.5 million people legally own a firearm, according to figures provided by the Ministry of the Interior 20 minutes away. Among them, four million hunters form a large part of the arms owners. The rest, 1.5 million, is made up of firearms professionals – manufacturers, importers, gunsmiths, brokers –, collectors and licensees of sports shooting clubs.

Over the past ten years, these clubs have seen their membership explode, rising from 145,000 in 2011 to over 242,000 in 2022, an increase of 70%. If some are passionate about this sport, others train and buy weapons for a less avowed purpose, and still very taboo, that of self-defense.

Authorized detention, but the total carrying of weapons

This is the case of Mitch, therefore, a member of ARPAC, an association that campaigns for the restoration of the carrying of firearms for citizens in public space. In other words, the right to carry a weapon in the street “just in case”. For this 40-year-old salesman, “having a weapon on you means having the possibility of defending yourself. My spouse is 50 kg all wet, she is not physically able to resist, anyone can hurt her. A weapon, at least, puts everyone on an equal footing,” he explains, stating that the association, which brings together several thousand people, receives new membership requests every week.

However, in France, with very few exceptions, carrying a weapon is totally prohibited. “Apart from the police, the carrying of weapons may be authorized in certain cases, for bodyguards, certain politicians, journalists, lawyers or magistrates concerned by the risks linked to terrorism”, explains Yves Gollety, the president of the National Trade Union Chamber of French Gunsmiths (CSNA)recalling that the permit is issued by the Ministry of the Interior and renewed every year.

If Mitch was able to acquire this arsenal, it is because he is licensed from a shooting club, one of the mandatory conditions for buying and owning a weapon. “In addition to that, you have to practice shooting for six months, have a medical certificate and not be registered FINIADA (National File of Prohibited Acquisition and Possession of Weapons)“, adds Yves Gollety. For certain categories of weapons, it is also necessary that the sports shooting club issues a favorable opinion in order to be able to obtain one. Once purchased, these weapons cannot be used outside the shooting range. shooting and transported in a case or bag, the ammunition stored separately.

“The cream pie was the Bataclan”

But it is outside the shooting range that Mitch would like to be able to carry his weapon. Because since the attacks of 2015 in particular, the commercial affirms not to feel safe: “The police cannot be present everywhere, the time of intervention varies according to the territories, in particular in the rural areas. I trust the police to look for the perpetrators afterwards, but at the same time, we cannot count on them, we must be able to defend ourselves”.

For Patrice Bouveret, Director of the Armaments Observatory, this feeling of insecurity developed after the attacks of 2015, but also with the decline in confidence in the police. “Since Charlie Hebdo and November 13, more people want to equip themselves,” he says. This wave of murderous attacks, precisely, Mitch believes that it could have been avoided with the carrying of a citizen weapon. “The cream pie was the Bataclan. If people had been armed, it wouldn’t have been a mass killing”, he adds, pleading for a license to carry a weapon for “French volunteers, without a criminal record, who can justify training “.

Faced with those who believe that such a measure would increase violence and mass killings, like the United States, the man brushes aside criticism: “Carrying a weapon is not is not to want to kill everyone. We are presented as dangerous people, but we do not advocate any violence, we just ask for the right to defend ourselves, ”he reacts.

But between those who hold them legally, like Mitch, or those who buy them illegally or who inherit them, it is impossible to quantify and trace all the weapons circulating in France, explains Patrice Bouveret, director of the Armaments Observatory. “We only know which ones are bought legally because they must be declared on the weapons information system (SIA), launched in February 2022, which replaces the old Agrippa file”, adds the specialist. Beyond the weapons, it is the profiles of certain holders that worry the authorities, in particular ultra-right groups, supremacists or survivalists. How to differentiate those who are passionate about sports practice from those who could use their weapon? “Shooting club presidents are very vigilant, they don’t want cowboys or Rambos. At the slightest doubt about the profile, we report to the prefecture, ”explains Yves Gollety.

According to Laurent Nuñez, the national coordinator of intelligence and the fight against terrorism, more than a thousand people belonging to these movements are followed by the intelligence services. “Among them, we see that a certain number of them seek to arm themselves to prepare violent actions or to prepare for this racial war that they imagine”, he detailed, in the Special Envoy program, “Never without my weapon”.

Unfortunately, some still slip through the cracks, like Loïk Le Priol, a far-right activist well known to the police, who was indicted in April for murder. He is suspected of having shot and killed ex-rugby player Federico Martin Aramburu, 42, on Saturday March 19 in Paris. For others, it is emotional fragility or instability that makes them fear acting out. Like May 11, 2021 in the Cévennes. That day, Valentin Marcone, described as introverted and obsessed with weapons, shot his boss and two colleagues at a sawmill in the Gard where he worked. The 29-year-old had a veritable arsenal in his home and even built his own shooting range in his backyard, a legal arsenal due to his enrollment in a shooting club.