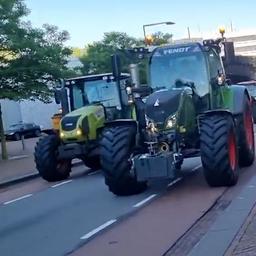 Farmers who want to demonstrate around Schiphol on Monday should not try to block the highways around the airport with tractors. Blockades will not be tolerated, says a spokesperson for the municipality of Haarlemmermeer, which includes Schiphol.

In the case of blockades, “police and Marechaussee vehicles” intervene.

Roads around the airport may be closed and alternative locations designated for the farmers to demonstrate. It is not yet known which places those are. It will be near Schiphol, says the spokesman. “You have to think of a kind of Malieveld.”

The spokesperson says that the demonstration has not yet been registered. “But we are prepared and the scripts are ready.”

Minister to farmers: ‘Start the conversation’

Nitrogen minister Christianne van der Wal previously called on farmers not to participate in blocking campaigns on Monday. Activists want to block Schiphol and distribution centers for supermarkets, among other things. “Don’t do it,” the minister says. “Start the conversation.”

She does not emphasize that all farmers “want to lump together”. According to the minister, it concerns “a small group of rioters” crossing the border. “Fortunately, there are many farmers who want to start the conversation.”

The cabinet will appoint a mediator to lead discussions between the government and the farmers. Van der Wal hopes that this will bring “nuance” back into the discussion.