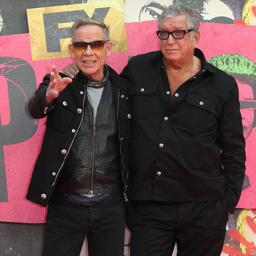 In July you can see the crime series Under the Banner of Heaven, a true drama series about The Sex Pistols and the comedy action film The Princess on Disney+.

America the Beautiful (season 1)
The award-winning producers behind the wildlife documentaries Planet Earth and Frozen Planet show how impressive American nature is in America the Beautiful. The story of North America is told through images of landscapes and certain animal species.

America the Beautiful will be available on Disney+ from July 4.

Pistol (season 1)
Director Danny Boyle (Trainspotting, Slumdog Millionaire) tells the true story of the punk band The Sex Pistols. In the 1970s, a group of rebellious musicians come together to shock conservative England with aggressive music and chaotic performances. The band becomes successful and struggles with fame.

Pistol will be available on Disney+ from July 6.

Solar Opposites (season 3)
In the third season of the animated series Solar Opposites, the aliens have completed their mission and team leader Korvo begins to accept that Earth is his new home. That doesn’t mean the aliens are going to take it easy. They continue to cause a lot of chaos and have various strange adventures.

Solar Opposites will be available on Disney+ from July 13.

Santa Evita (season 1)
In 1952 the Argentine icon Eva Peron (Natalia Oreiro) passed away. The beloved first lady’s body was embalmed so that it could be placed in a monument. However, her political opponents rose to power and tried to get their hands on the embalmed body. To prevent this, a daring plan was devised.

Santa Evita will be available on Disney+ from July 26.

Under the Banner of Heaven (season 1)
When a murder is committed in a Mormon town, Detective Jeb Pyre (Andrew Garfield) investigates. The strictly religious police officer digs into the horrifying details and makes some shocking discoveries that leave him questioning his faith and the Mormon Church.

Under the Banner of Heaven will be available to stream on Disney+ from July 27.

High School Musical: The Musical: The Series (season 3)
In the third season of the teen series, the students go to camp and there they can perform Frozen. EJ (Matt Cornett) will direct the musical, which proves to be quite a challenge, especially when his girlfriend Gina (Sofia Wylie) auditions for the lead role.

The Princess (2022)
A young princess (Joey King) is betrothed to the violent Julius (Dominic Cooper). She refuses to marry the man and as punishment the princess is locked up in the highest tower. She manages to escape and goes into battle with her enemies.

The Princess will be available on Disney+ from July 1.

Zombies 3 (2022)
In children’s film Zombies 3, people, zombies and werewolves live in harmony with each other. That peaceful existence is jeopardized when the town of Seabrook is attacked by aliens. The aliens are looking for something, but the supernatural inhabitants of Seabrook don’t give up and go into battle.

Zombies 3 will be available on Disney+ from July 15.

Aftershock (2022)
In the US, a large number of black women die after giving birth due to not receiving proper care. The award-winning documentary Aftershock follows single fathers Omari and Bruce, who have both lost their partners. The men fight for justice and try to combine their activism with caring for their children.