Of the 125 municipalities of Jalisco, 59 present a high and very high index of migratory intensity towards the United States (EU). All are located in the interior of the State, according to data from the Inegi 2020 Population and Housing Census.

Iliana Martínez, a researcher at the ITESO Migration Affairs Program, explains that there is a significant intensity of people who decide to go live abroad, with and without papers. “And there continues to be a significant movement of Jalisco residents to the United States undocumented.”

Reuniting with relatives, the main reason

Of the 60,587 Jalisco residents who decided to go live in other countries between 2015 and 2020, 79% chose the United States as their destination; that is, almost eight out of every 10 people who emigrated, according to data from the National Institute of Statistics and Geography (Inegi).

According to data from the latest Population and Housing Census, almost four out of every 10 Jalisco residents who went to another country or state did so to reunite with their family, followed by a change or job offer or to look for work. The sixth cause is criminal insecurity or violence.

Iliana Martínez, a researcher at the Migratory Affairs Program of the Western Institute of Technology and Higher Studies (ITESO), comments that there are no official data on how many people who leave the Entity to live in other countries, especially the United States, are undocumented.

In general, he says, The migratory route, on its way through Jalisco, has registered a decrease in migrants arriving at local shelters.

“What we see in the shelters is that they are at their minimum attention. Our colleagues told us that the migratory dynamics have not stabilized, there may be days when they have 30 people and others where they have a small flow of three or four people”.

He adds that it is not exactly known if they are passing through to the North, if they are already back because they were deported or for any other reason, “or what condition they are in, if they are applicants for refugee status…”.

The academic comments that, in general terms, it remains one of the least traveled routes. “We do see, on the contrary, on the northern border of this route, the case of Tijuana and Nogales, in some shelters in Sonora, the flow is important. They are probably arriving by other means and clandestinely where we cannot detect them”. 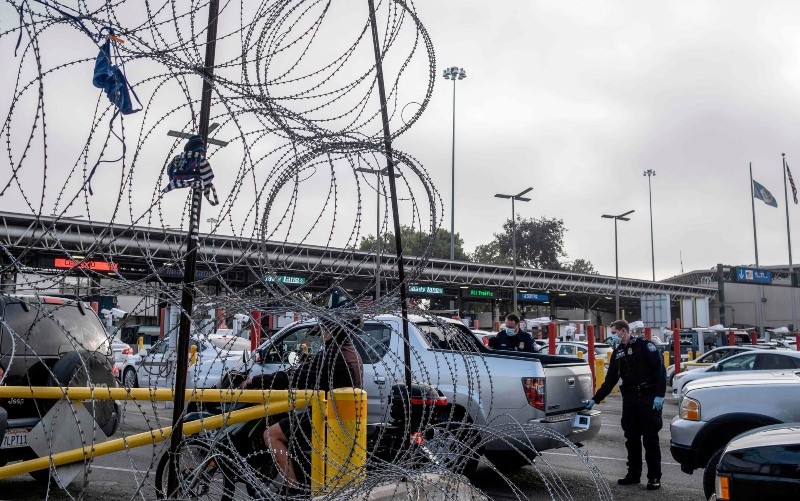 They leave their homes due to violence

Due to the violence generated by organized armed groups, as well as political violence, social unrest and territorial conflicts, During 2020, in Mexico, 24 episodes of massive internal displacement were registered in eight States, 25 municipalities and 66 localities.

The foregoing, according to the report “Episodes of Mass Forced Internal Displacement in Mexico”, prepared by the Mexican Commission for the Defense and Promotion of Human Rights (CMDPDH).

The states where the most episodes were recorded were Guerrero and Oaxaca, with five episodes each. “There were also episodes of massive displacement in the states of Chiapas, Chihuahua, Michoacán, Sinaloa, Sonora and Quintana Roo.”

Regarding the number of displaced people, it is estimated that at least 9,741 people had to leave their place of habitual residence.

According to the cumulative historical record, The total number of people internally displaced by violence in Mexico as of December 2020 amounts to 356,792.

Of the latter, the organization reports one that occurred in Jalisco, in 2016. However, In May of last year, around 600 people left various communities in the municipality of Teocaltiche, after a confrontation between two organized crime groups.

Although the routes of migrants from Mexico to the United States have always been very dangerous because they are controlled by organized crime, the migration policies adopted in recent years in both countries have increased the risks, considers Iliana Martínez, a researcher with the Migration Affairs Program of the ITESO.

“Yes, it is well documented in the case of Mexico-United States, which As immigration policies become more restrictive and there are more obstacles and controls, the costs of making these journeys undocumented increase and the risks for people who cannot afford it completely or who pay coyotes, that are less safe”, emphasizes the specialist.

In the case of the Mexican territory, he points out that people are encountering more obstacles because of the checkpoints, “because of the militarization that we see in the country, and it surely has a direct impact on the risks, people choose to travel through less secure routes, the that require fewer resources, in which they are prey to gangs or organized crime.”

The researcher recalls that the Mexican government continues without recognizing the militarization of migration policy, when in reality there is a greater presence of the National Guard, whose mandate is to stop the passage of migrants through the national territory.

He clarifies that the policy of the current administration does not present a drastic change with respect to previous six-year terms, because for several years there has been a policy of detention and deportation, but he does see it as a contradiction in relation to commitments that were previously established. to start the government.

“What we are seeing in practice is a closed southern border, closely guarded by the National Guard, the same situation throughout the territory, and finally a northern border crisis. that it is not new but that it has been getting worse to the extent that the number of people who cannot cross into the United States is also accumulating.” 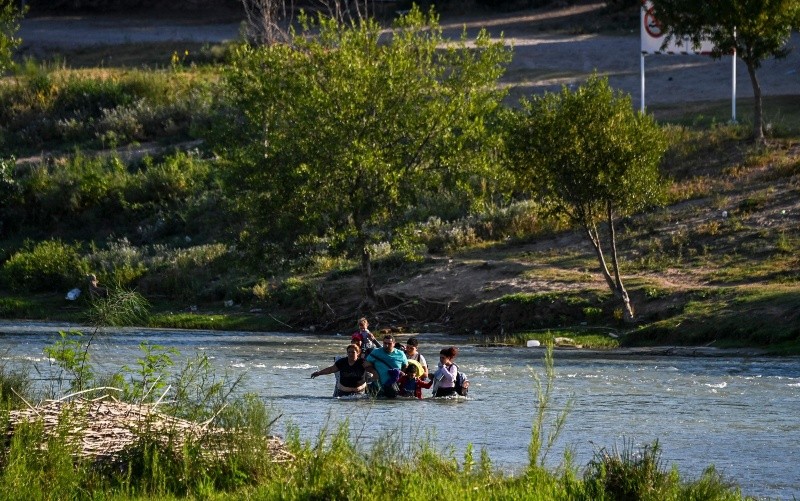 A family illegally crosses the border on the Rio Grande, on the border between Mexico and the United States. AFP/C. khanna

“These accidents are not new”

The death of 53 migrants who were traveling crammed into a trailer, located in Texas, United States, of which 27 were Mexican, adds to other unfortunate events that occurred, mainly at the borders, due to immigration policies, says the ITESO academic.

“This type of accident is not new, like what happened in Texas. It has already happened other times both on the northern border and on the southern border. In the latter we also had a trailer that overturned a few months ago, most of the people injured were Central Americans.”

Migrants, remember, have to resort to these routes to pass because there is no possibility of accessing other safe crossings.

He underlines that many people cannot go to the consulates and obtain visas and work permits, “and that is why we continue to see this type of crossing and action by organized crime, by human traffickers, that when they are cornered, well Those who lose out are the migrants because they experience this type of abandonment or accidents.” 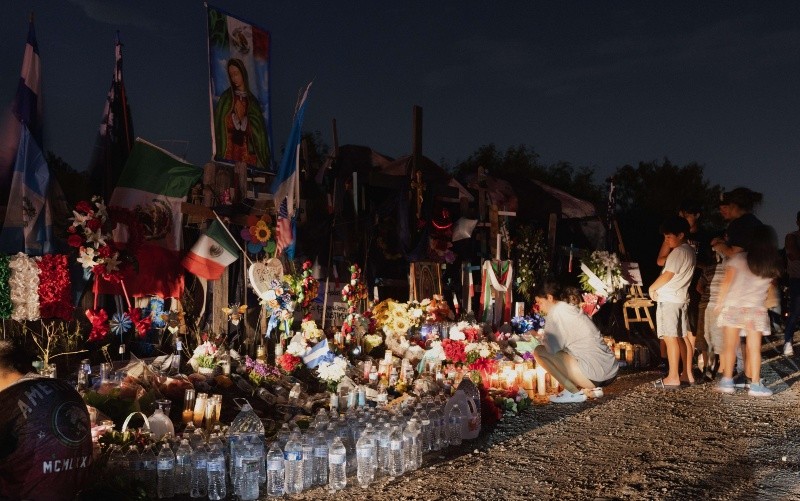 Memorial at the site where dozens of abandoned migrants lost their lives last Monday in the back of a truck. AFP/J. Vonderhaar

The ambassador of the United States (EU) in Mexico, Ken Salazar, warned that the solution to the migratory problem, which prevents these episodes from being repeated, must be regional, because no country alone can solve it.

The diplomat recalled that for 40 years, the presidents of both nations have raised the need to confront and provide a viable solution to the migratory phenomenon, but so far it has not been achieved because in the past “they lacked courage.”

“We have a lot of work to do ahead. At the moment, when you look at the different meetings that have happened in the past with presidents, For 40 years it has been proposed there that we are going to do something with migration, but it has not happened; It hasn’t happened because they haven’t had the courage to migrate regionally. The United States cannot do it alone, Mexico cannot do it alone, Central America cannot do it alone,” he said.

For this reason, he stressed that President Joe Biden’s commitment “in the Western Hemisphere” is to work with Mexico. In addition, the US ambassador denied that the migratory problems are due to a hardening of the measures against the transit of migrants to the United States.

He indicated that migrants have hope for a better life for themselves and their families.

“None of you, no one from any country of origin is going to reach this painful corridor just because they want to,” he remarked.

They authorize the end of the “Stay in Mexico” program

Yesterday, the Supreme Court of the United States authorized President Joe Biden to end the “Stay in Mexico” program, introduced by Donald Trump and under which asylum seekers are sent back to await the resolution of their cases across the border.

By a narrow majority of five to four, the justices ruled that ending this policy does not violate immigration law.

The US government asked the Court to review the judicial ruling issued in December by an appeals court that ordered it to maintain the Migrant Protection Protocols, known as “Stay in Mexico”, introduced by its predecessor, Republican Donald Trump, in 2019 .

Chief Justice John Roberts, along with conservative Brett Kavanaugh, and the three liberal justices ruled that federal immigration law grants discretion to the executive branch, meaning that it may or may not expel asylum seekers.

Do you have relatives who have gone to live in another country?