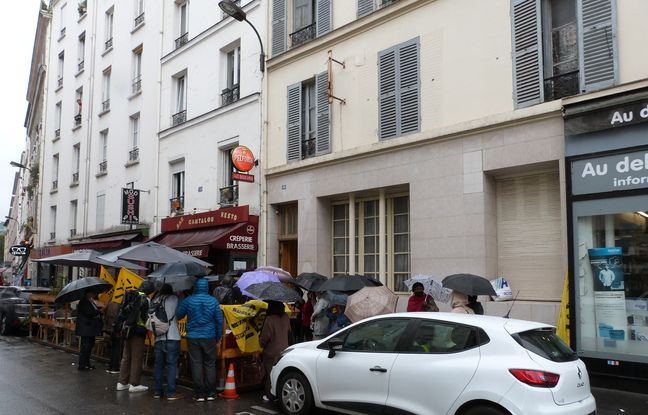 “They want to kick us out. Rabia has lived for eight years in the Hôtel du Marché, located at the intersection between rue Bouret and rue de Meaux, in the 19th arrondissement. “They warned us three months ago that we had to leave today. And that in this case, they offered us the June rent. Leaving, but to go where? asks this man with the long white beard. And yet, his accommodation is far from a suite at the Lutetia. Five hundred euros monthly for 9 m², with toilets on the landing and a shower for all tenants. “He only pays 400 euros, but he has half a room with half a window”, laughs Rabia annoyed, pointing to Hakim, his neighbor.

The miserable routine of the hotel ended in 2021 when Mondafim, a real estate company located in the 16th arrondissement, acquired the walls from the former owner. Neither one nor two, she gets the hotel manager to sell her the business, even though the lease had not been renewed. A great real estate operation is looming, because if the hotel is shabby, it is located in the heart of the Secrétan district, in the process of gentrification, where the basic pint of blonde is negotiated 8 euros and where the media, but now single, chef Juan Arbelaez has opened a restaurant.

The endless wait for social housing

“The case is juicy, but there is a problem with the smooth running of the business: the tenants”, writes the DAL in the press release calling for a day of mobilization this Thursday, June 30. And despite the rain, the association rallied activists, banners and megaphones to defend the fate of the residents, all under the discreet supervision of the RG. “We helped them to set up a collective so that they could defend themselves better together, explains Passy, ​​activist of the DAL. We were received by the town hall of the 19th arrondissement, where we were told about the possibility of rehousing. »

Many of the residents have already applied for social housing, like Sophie*, who lives with her husband Patrick*, 66 years old and suffering from Alzheimer’s for four years. “The town hall does not care about us, they organized a telephone barrage, she denounces. The social service sends us back to the town hall which sends us back to the social service, we go around in circles! For her, her relocation is all the more urgent since the illness of her husband, who has great difficulty moving around. “We are on the fourth floor without a lift, but we have to go down to the first for the shower, not to mention the almost daily care for Patrick. »

“We’re not going to provide them with the extra maid!” »

For his part, the manager of the hotel, seated at the nearby Café des Deux Amis, refutes the term “sleeping merchant” and the critics of the DAL, who denounce “housing conditions of the working classes of the last century in Paris” . “We must not be in bad faith, he explains in his dressing room where he receives us. We never forced tenants to come here. Five hundred euros a month and they don’t pay for water and can cook. We are not going to provide them with the maid and more! We also have to pay rent, insurance, etc. »

Encouraged to leave, but without alternative accommodation, the inhabitants are distraught and some report pressure from big guns. “We were threatened with breaking down our doors and changing our locks,” says Rabia. Faced with this, Passy indicates that the DAL “alert the police in case of violent eviction”.