Viral: They arrest a woman for ripping off her neighbor’s finger with a bite!

Yesterday, the Attorney General’s Office of the Mexico state (FGJEM), in conjunction with the Municipal Police of Atizapán de Zaragoza, arrested a woman identified as María Yenni “N”, 33 years old. She is being investigated for the crime of intentional injury.since he would have amputated a finger to one of his neighbors with a bite.

According to the prosecution, the arrest of this person was carried out during a search of a property located on Hogares de Atizapán avenue, in the Hogares de Atizapán housing unit on June 28. After being captured, the probable participant was admitted to the Penitentiary and Social Reintegration Center of Tlalnepantla, where it remained at the disposal of the judicial authority, who will determine its legal situation. 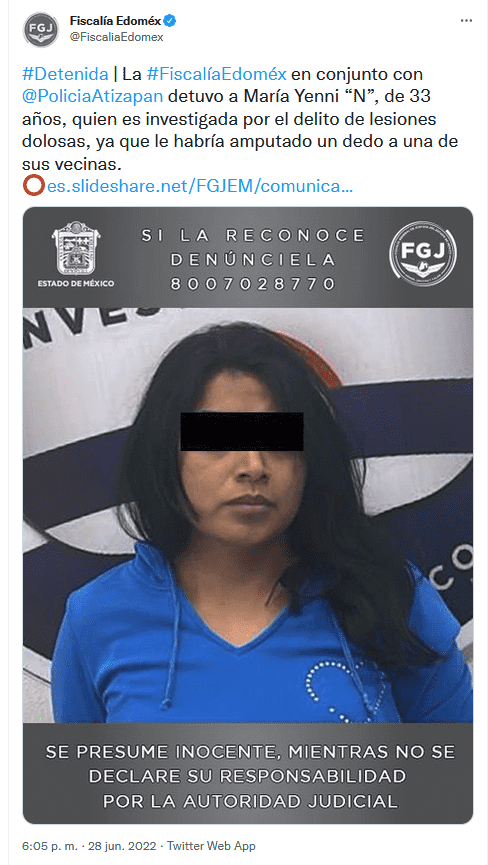 This was the aggression of Maria Yenni “N” against her neighbor

The crime for which Maria Yenni “N” is investigated occurred on June 14, 2020 in the common area of ​​the aforementioned subdivision, where a gathering was held; sometime The detainee would have started an argument with her husband, for which one of her neighbors intervened in order to calm her down.

María Yenni “N”, apparently verbally and physically assaulted the victim and then He bit the little finger of his left hand, until it was amputated.

These facts were denounced before the Prosecutor’s Office of the State of Mexico, for which an investigation was initiated by the crime of malicious injuries.

The defendant was summoned on several occasions to hold a hearing to formulate charges, without her appearing; therefore, the Agent of the Public Ministry asked the judicial authority to issue an arrest warrant against her, as well as a search warrant for a property inhabited by her.

Both judicial orders were granted, so personnel from the Tlalnepantla Regional Prosecutor’s Office, who had the support of elements of the Atizapán Municipal Police, went to the site, where this person was detained.

The detainee must be considered innocent until a conviction is handed down against her.