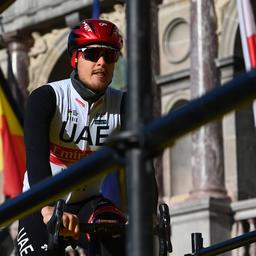 Matteo Trentin cannot participate in the Tour de France due to a positive corona test. The Italian of UAE Team Emirates, the team of Tadej Pogacar, is replaced by Marc Hirschi.

“Unfortunately, Matteo has tested positive and will not start in the Tour this year. Despite the disappointment, he is feeling well and has no symptoms at the moment,” UAE Team Emirates wrote in a short statement on Twitter on Wednesday.

The forced cancellation of 32-year-old Trentin is good news for Hirschi, who takes his place. The Swiss also participated in the Tour de France in the past two years and won the twelfth stage two years ago.

Trentin is the second rider who can put the Tour de France out of his mind before the start due to a positive corona test. On Tuesday, Quick-Step Alpha Vinyl announced that Tim Declercq cannot participate for the same reason.

There are not only problems among the riders. Sporting director and sports director Merijn Zeeman of Jumbo-Visma also announced on Tuesday that he has the virus among its members. He was not yet in Copenhagen, Denmark, where the Tour will start on Friday with an individual time trial.

A small boost for all teams is that the international cycling association UCI has relaxed the corona rules slightly. Last year it was still the case that a team was expelled from the Tour if two or more riders tested positive within a week, but that measure has been cancelled.

Read all about the Tour de France on our special page

Weather in Puerto Vallarta today: the forecast for Monday, August 15, 2022