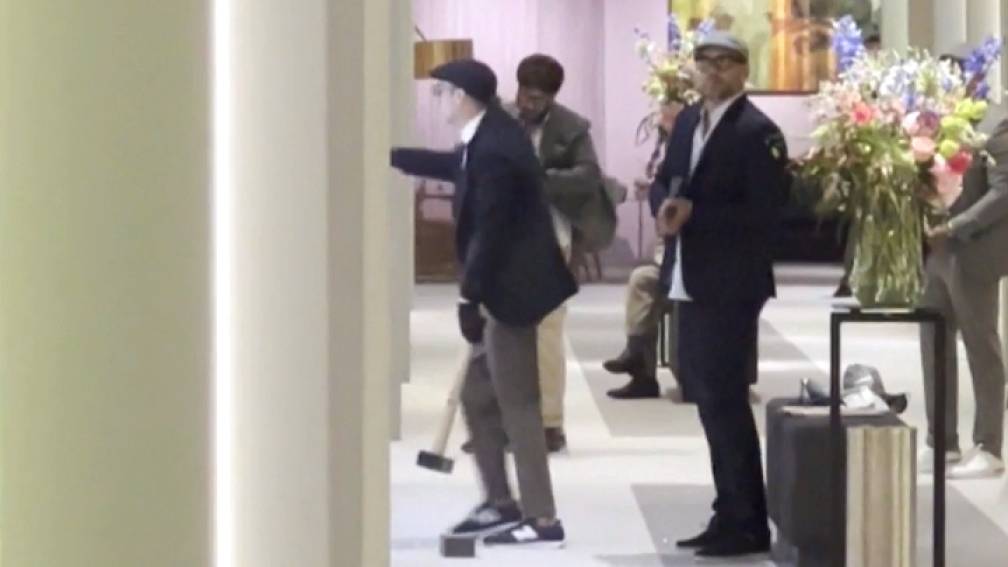 It is still a mystery how four neatly dressed men, armed with a sledgehammer and probably firearms, robbed jewelery in broad daylight at an art fair in Maastricht yesterday. According to experts, they are almost certainly professional robbers and it will probably be very difficult to find the loot.

Experienced art gangs often immediately get to work with their loot after a robbery, explains art detective Arthur Brand. “The polishers are then ready to cut a large diamond into small pieces, for example. Everything about such a jewel is reused: the gold is melted down by goldsmiths. It is rare that well-known jewels are sold completely.”

It is still unclear what was stolen at the Tefaf art fair. The police can only confirm that jewelry was taken. Footage of the robbery shows one of the men holding a necklace, a necklace, in his hand and putting it in a bag.

Another man also appears to be putting jewels in a bag:

“I have never seen such a robbery committed with such violence in broad daylight at an antique fair with a public,” says art historian Martijn Akkermans. It must have been a clever plan, he said. “Four gentlemen with blazers and caps on, as if they were the Peaky Blinders.” That is a British TV series about a criminal gang at the beginning of the 20th century.

According to experts, the fact that the perpetrators struck at the stand of the British jeweler Symbolic & Chase means that it is a very valuable loot. “This jeweler always brings an incredibly beautiful collection,” says Akkermans.

According to him, there are conflicting reports about which jewelry was stolen. It may be a showpiece worth 27 million euros, invested with pearls, emeralds and a large yellow diamond. Akkermans: “It is in any case a jewel with a very large diamond, or several, that is clear.”

Sometimes the perpetrators are caught, but then no trace of the loot can be found.

Based on all the reporting about the incident, art detective Brand says: “It seems to be a necklace with a canary yellow diamond, the highlight of the fair. When you take such a big risk, you go for the masterpiece. It was a spectacular image.” He has heard few details about the robbery from his own circles.

According to art historian Akkermans, it will be a “very difficult issue” for the police. Maastricht is close to Germany and Belgium, so according to him there is a good chance that the loot was brought across the border immediately after the robbery. And once the jewels have been disassembled and processed, he says it will be very difficult to find the loot ever again.

“Two years ago a famous diadem was stolen in England and it has never surfaced again. The diamonds were probably removed and sold there. That’s how it goes.”

Brand is also gloomy: “Jewelry is rarely found in its original state. Sometimes the perpetrators are caught, but then there is no trace of the loot to be found.”

The robbery in Maastricht reminded him of robberies by the internationally operating art gang Pink Panthers. That gang has committed more than a hundred successful robberies at jewelry stores over the past twenty years.

According to Brand, the robbers in Maastricht were also well prepared. After half a minute they took off with the loot. “They knew how to keep people at a distance. You just have to dare, in the middle of a large building with hundreds of people around you.”

The origin of the name of French bread, one of the most popular in Peru

Surprise in the semifinals of the Cairo tournament: Alexandra Iordache defeats Mayuka Aikawa

The fire of “Landiras-2” marks a “break” in Gironde

Cairo, difficult godfather of the Palestinian enclave, for lack of other solution