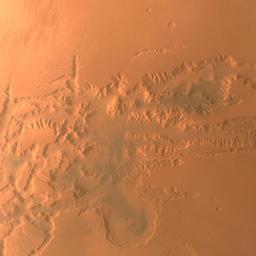 An unmanned Chinese spacecraft has collected footage from the planet Mars. Among other things, images have been made for the first time of the ‘south pole’ on the red planet, reports the China Lunar Exploration Project Wednesday.

The Tianwen-1 reached Mars in February 2021. A robotic vehicle was placed on the surface while the unmanned spacecraft surveyed the planet from space. Since early last year, the spacecraft has orbited the planet 1,300 times, Chinese state media reported Wednesday.

Among the images taken from space are China’s first images of Mars’ south pole, where nearly all of the planet’s water supply is located.

In 2018, a probe led by the European Space Agency (ESA) discovered water under the ice at the planet’s south pole. Locating underground water is key in determining the potential for life on Mars, as well as determining whether it could provide a permanent source for human exploration.

Other photos include the 4,000-kilometer-long Valles Marineris canyon and Arabia Terra, a highland in the north of Mars that is dotted with impact craters. The Tianwen-1 also transmitted good quality footage of the rim of the large crater Maunder.