Antonio de la Cruz: Murder of the journalist will not go unpunished, assures the Presidency

Jesús Ramírez, spokesman for the Presidency of the Republic, assured that the murder of journalist Antonio de la Cruzof the “Expreso” newspaper, from Ciudad Victoria, Tamaulipas, will not go unpunished and reported that his daughter is seriously injured in this attack and his wife is unharmed.

In his Twitter account, the presidential spokesman, Jesús Ramírez, stated that “We must not allow more attacks on journalists or activists”.

“The Tamaulipas journalist Antonio de la Cruz was murdered, his daughter is in serious condition and his wife is unharmed. Our deepest condolences to the family and his co-workers”, he wrote on the social network. Although before, she had pointed out that the minor had also died and that her wife was injured.

This Wednesday morning, the reporter for the “Expreso” newspaper, Antonio de la Cruz, was assassinated in Ciudad Victoria, Tamaulipas, as he left his home.

Preliminary data indicated that in the attack on Puerta de la Luna street, in the Puerta de Tamatán subdivision, her daughter had been injured.

The newspaper “Expreso” reported on its website that “in the face of this act of violence, Grupo Editorial Expreso-La Razón demands that the authorities at all levels do justice.” 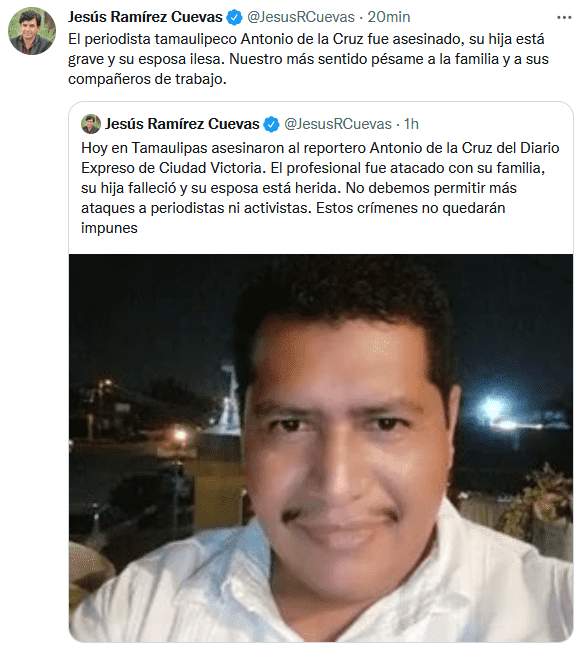