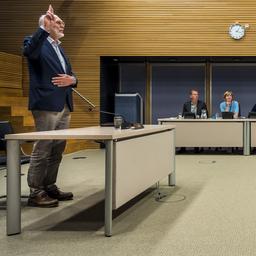 There should have been more independent research into the relationship between earthquakes and gas extraction much earlier. According to scientist Hans Roest, this could have prevented the responsible parties from ending up in a tunnel. On Tuesday, like scientist Hans de Waal, he shared his story about tunnel vision, contradictory findings and ignored signals.

Both scientists denounce the tunnel vision that existed from the 1990s until the Huizinge quake in 2012. “As a result, it has received seriously insufficient attention. Too little external feedback has been sought,” says De Waal. Roest thinks more room for independent sounds could have prevented tunnel vision from developing.

The Dutch Safety Board (OVV) also wrote this in its hard-hitting report from 2015. The stories that were told on Tuesday were therefore not entirely new, but they did offer a shocking picture of the course of events over the years.

In the late 1970s, De Waal conducted research into subsidence as a result of gas extraction and found that the situation was worse than the Nederlandse Aardolie Maatschappij (NAM) assumed. His model was embraced a few years later, when NAM saw the subsidence taking place in practice.

Nevertheless, in 1989 NAM switched back to the old model, which predicted a lower subsidence. This happened after a second opinion (on behalf of the NAM) was carried out by renowned scientists from the American university MIT. They concluded that NAM could use this model.

From 1977 he worked as a researcher into subsidence due to gas and oil extraction at Shell Research.

De Waal: “I was very surprised and still don’t get it.” At that time he felt a kind of “persona non grata” at NAM. “We were still on speaking terms, but the relationship was over.” These limited effects on subsidence were maintained for years, until finally in 2016 NAM could no longer maintain that De Waal’s model was incorrect. Only then was he (again) proven right.

De Waal is curious whether the Committee of Inquiry will still uncover what in 1989 was the reason for NAM to put its model off the table.

Roest ‘wasn’t allowed to look up the media’

In 1993 it was recognized by a special commission that there was a relationship between gas extraction and earthquakes. Rust, which was seen as “sleeper“, had drawn attention to this for some time. The researchers also said that the damage would be “minor” and that the quakes would have a maximum magnitude of 3.3.

Roest did not share this conclusion, but the committee did not want to hear about it. He was told that he was “not allowed to look up the media” and that the KNMI was the spokesperson. After the earthquake in Huizinge, it turned out that he was right.

Roest joined the Independent Geologists Platform in 1993. These scientists expressed a lot of criticism of NAM and Shell, because there was no independent knowledge. At the time, Roest was still working at TU Delft, but became the subject of discussion there because of his vision. “There was no more money from NAM for research into earthquakes,” says Roest.

He spoke of a field of tension that his employer found himself in: “We have to be independent as a university, but everything falls off the wall when the word Shell is mentioned.”

Worked at TU Delft for 25 years Already established years before ‘official’ recognition that there was a relationship between earthquakes and gas extraction Joined independent platform Geologists, but NAM ignored their observations Started working at SodM in 2001, became aware early worry about number of quakes

‘KNMI thought we shouldn’t get involved’

Both scientists were very critical of the KNMI during their interrogations on Tuesday. The institute that investigated the seismicity stuck to a maximum magnitude for a long time.

Both De Waal and Roest eventually made the switch to State Supervision of Mines (SodM). The regulator started to worry about the increase in the number of earthquakes from 2006 onwards. “The KNMI said it was not an issue,” said De Waal. “They also felt it was their expertise.”

“How is it possible that people have been in that tunnel for so long?”

This perpetuated the notion that earthquakes were not a cause for concern, explains Roest. He tried to get the discussion going, because “Groningen was out of step”, but this did not work.

The earthquake in Huizinge was necessary to finally break through this “widely supported idea”. “Nobody was awake before that,” said Roest.

‘How is it possible? Has no one ever doubted?’

De Waal seized the opportunity to conduct his own investigation. After two weeks, he already questioned the KNMI’s assumption that a quake would have maximum strength. The SodM established that you could not determine an upper limit at all and that the amount of gas that was extracted had an influence on the quakes. “The KNMI also thought that we should not interfere with it,” says De Waal.

He still wonders “how is it possible that people have been in that tunnel for so long”. “Has there never been any doubt?”

Both de Waal and Roest still find it astonishing that very little research has been done in the Netherlands. The few people who have been concerned with the environmental consequences of gas extraction since the 1980s were all in the same tunnel, the scientists say.

“Hundreds of billions have been earned from the Groningen field. And if you look at what has been invested in independent knowledge development, that is very little,” concludes De Waal.