A TF1 report behind the death of a Ukrainian soldier? Caution

Did a report broadcast on TF1 cost the life of a Ukrainian soldier? This is the accusation made by many Internet users on social networks since Monday. In essence, footage from a report on a Ukrainian unit would have allowed Russia to pinpoint its position and direct fire at it, causing one death.

Some even draw a parallel with the dissemination of information by BFM TV on the position of the Hyper Kosher hostages, stormed by Amedy Coulibaly in January 2015.

He is our colleague Guillaume Patz who spotted the tweets of a Polish journalist, Mateusz Lachowski reporting the death of the soldier: “It is about “Keks”, Ukrainian soldier, volunteer, who defended Ukraine. In plain clothes, he was a dental technician. […]. Unfortunately, “Keks” is dead. He died under Russian fire after French journalists who came for us revealed the Ukrainian positions. » 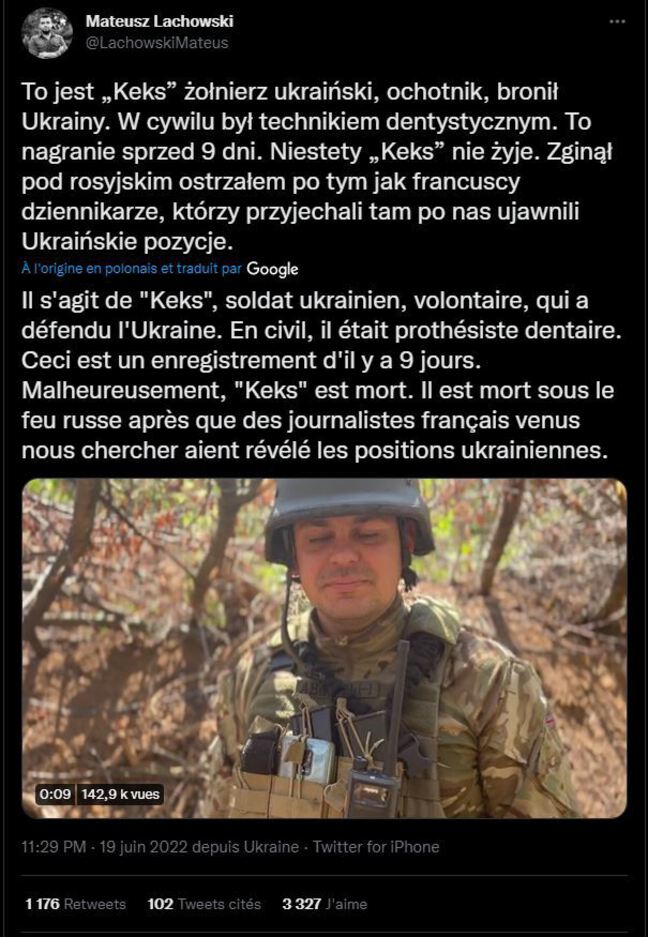 The tweet of the Polish journalist who links the death of the Ukrainian soldier to the report of TF1. – Screenshot

The Polish journalist does not quote TF1 directly, but Guillaume Patz makes the link with a report from the channel showing how Ukrainian soldiers stationed in the Donbass use commercially available drones to locate enemy positions. Mateusz Lachowski validates this assertion by responding to the French journalist.

In a second tweet, the Polish journalist explains that he was present on site at the same time as the French television team: ” […] they first filmed in such a way that it was possible to define a specific place, then they immediately showed it in a short film…” In response to Guillaume Patz, he adds that “the journalists told the soldiers that ‘they would jam and obfuscate any confidential material and send the recording to the Ukrainians for verification before publication in order to protect the Ukrainian positions. »

Several elements call for caution. The journalist’s testimony to begin with. Joined by 20 Minutes, Mateusz Lachowski, who officiates for the Polish news channel TVN 24, specifies that he was not on the scene at the same time as the French team. He was present the same day as the TF1 journalists, but he left the scene before their arrival.

Mateusz Lachowski was able to confirm the identity of the 27-year-old soldier who was allegedly killed on June 18 following Russian artillery fire. Information confirmed by TF1. Informed the next day by three soldiers from the same company, he added that another member of the unit was injured and was still in hospital.

It was the latter who whispered to the journalist that the elements disclosed by the TF1 report would have helped to “inform” the Russian forces about their position. That’s why he uses the conditional in his tweets. The first begins with the word “Podobno”, which means “Apparently”, “Allegedly” in Polish, suggesting that he is not sure what he is saying. Contacted by 20 Minutes, the editorial staff of TF1 confirms the presence of “Keks” in the first seconds of the TF1 report as shown in the images below where we see him with a drone in his hands. 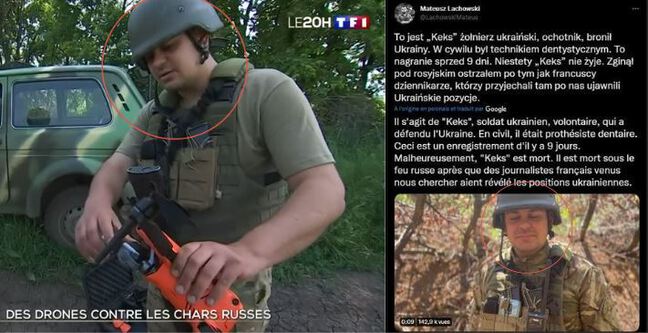 In these images, we see the soldier – Screenshot

In the report, we first see Ukrainian soldiers evolving in a rural environment, a few hundred meters from the Russians. We can also identify geographical elements (trees, embankments, etc.) that are recognizable to people on site. But in view of the clashes, the Russians are probably aware of the presence of Ukrainian soldiers nearby.

The elements that are the most questioned are part of a sequence that takes place in a “campaign headquarters” from which the operations on the spot are organised. We see soldiers working on maps and images filmed by drones and other cameras placed in trees by the Ukrainians. It is mainly the images of the cards that are in question. The cards are indeed clearly visible, and a close-up is made on one of them while an officer explains the different parts by pointing to them.

According to Mateusz Lachowski, these images should have been blurred and checked by Ukrainian soldiers before broadcasting: “We were instructed not to film these strategic elements and to blur those that could appear in the background. The soldiers confirmed to me that the French had the same instructions. Moreover, these images should have been checked by the Ukrainian authorities before being released. An agreement that would not have been respected by the TF1 team.

Allegations disputed by Guillaume Debré, director of information for the channel: “All the images were shot in agreement with the army and under the control of the soldiers present. Certain sequences were cut at their request, other elements were blurred. What appears on the screen is validated by these soldiers. The editorial staff of TF1 adds that his team was sent to the filming location by the Ukrainian army in accordance with the “rules of the art”: “Michel Scott is one of the most experienced French journalists in conflict zones . He knows the rules of war. “Grand reporter at TF1 since 1999, the journalist has indeed covered many conflicts (Bosnia, Chechnya, Iraq, Afghanistan…) and knows how to set up filming “without endangering those who intervene”, specifies Guillaume Debré.

On different images, you can very clearly see maps of the Ukrainian army. – Screenshot

Six days between filming and broadcast

Another point can raise eyebrows. The Polish journalist explains that the images were “immediately” published in a report. Private “Keks” was killed on June 18, the day after the broadcast of the report on the JT from 8 p.m. on TF1. However, the images of the campaign headquarters were shot on June 10, as confirmed by a plan where the French journalist shows the images filmed “at the moment” by a Ukrainian camera. We can see in the left corner, at the top of the screen, the current date. The report broadcast seven days after the shooting… The immediacy is therefore debatable. In the same way, on a field of war like that of the Donbass, one can imagine that in seven days, the troops and the fighting were able to move in one direction or the other and that the Ukrainian soldiers were no longer necessarily in the same places. 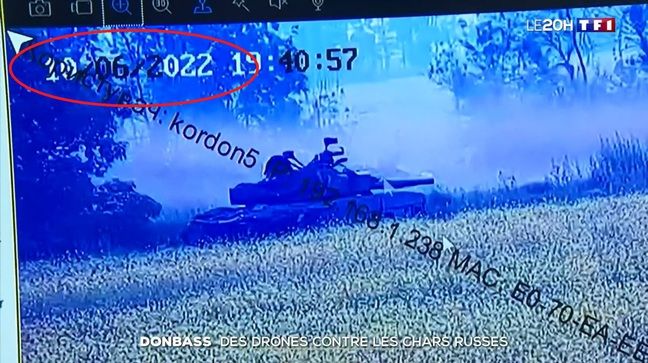 On this screen – Screenshot

The editorial staff of TF1 confirms this delay: “The images in the campaign PC were filmed on June 10. Those where we see the soldier “Keks” were shot the next morning, June 11, on a training ground located 35 kilometers from the combat zone that we see in the report. Above all, Mateusz Lachowski informs us that the soldier “Keks” was killed the very day of his arrival in a combat zone. It was therefore not his position at the time of the report that could have been used by the Russian forces.

While it is possible that Moscow intelligence scrutinizes foreign media to glean information, it is important to clarify that they also have other equipment that is much more reliable and direct to locate an enemy. The Russian army has satellites and drones capable of locating enemy forces. Or, as some netizens point out who wonder if the iPhone used by the Ukrainian soldiers in the video is secure, could spying have provided information about the Ukrainians’ position. How was it the other way around, when the Ukrainians were able to identify and kill Russian officers after having intercepted communications troops from Moscow.