Viral: He celebrates his birthday in a restaurant and they try to charge him a shot for 13 thousand pesos!

Birthday celebrations are usually accompanied by good times that later translate into anecdotes. Some can be positive and others negative. In the case of Karla Gonzálezhe had to live an experience that he will never forget, after in a restaurant they wanted to charge him a shot in 13 thousand pesos.

In Monterrey, Nuevo León, the peculiar case that Karla González reported through his Facebook. The user indicated that she visited the restaurant the good bar to celebrate the birthday of your companion. What she did not count on is that they would try to charge her a shot well above the imagined price.

Karla recounted his experience. The young woman explained that they had a budget of approximately 4 thousand pesos and before going to the place they had checked the menu with the prices for any inconvenience.

the surprise for Karla and their companions came when next to the cake, one of the waiters would have offered them Whisky with much insistence without indicating the prices and the celebrated finally He chose the shot that would cost him 13 thousand pesos.

“When everything was fine, we wanted to drink 1 tequila (it was the most expensive) and then normal, lemonade, beer, our main dishes. Surprise! When the cake arrived and they offered us whiskey, they gave us several, they gave us to smell, the waiter was super insistent and in the end Nelson chose a Dalmore 25, yes mistake,” he said. 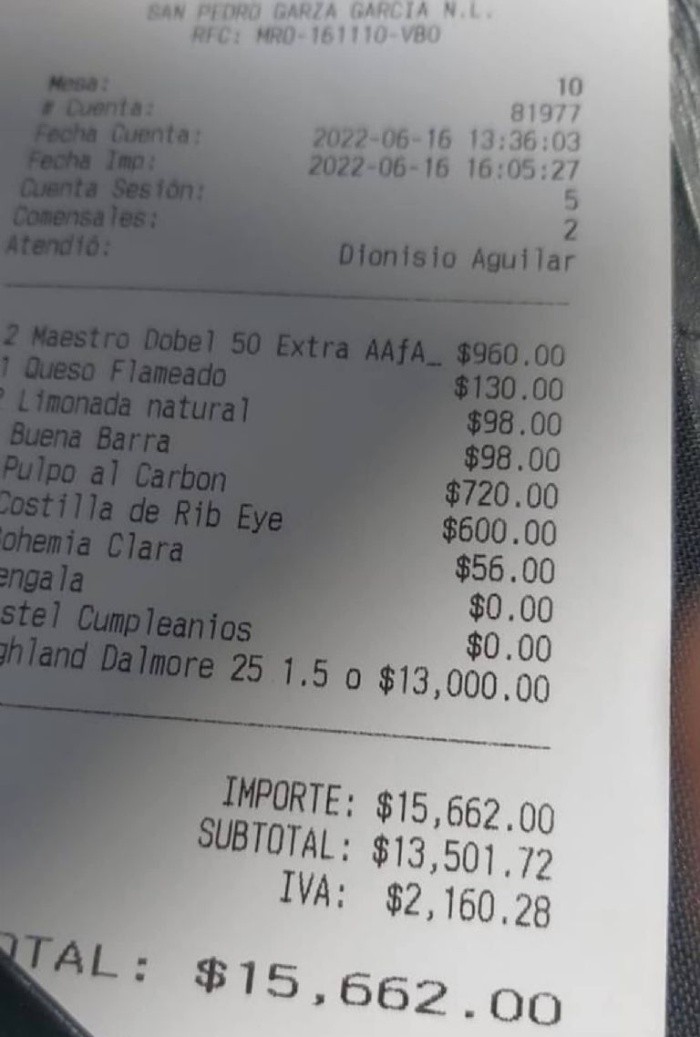 Karla explained that in her defense, neither the product nor the price was included in the menu and that the waiter did not inform them of the cost either; otherwise they would not have chosen that shot. Although they insisted on talking to the manager, they did not find an answer in more than 6 hours of waiting and the only solution they were offered was to pay for the shot.

“We spoke with the captain of waiters who only told us that it was only cheating if we asked for one thing and they gave us another, but if he didn’t tell us the price, it wasn’t,” he said.

“The captain of waiters mentioned once and again that there were people who drank drinks for 30 thousand pesos, and who were offended if he mentioned the price to themI told her that it was not my case and that it was just a special occasion, since I am not used to going to expensive places as a hobby, added Karla.

In the end, Karla concluded her story by assuring that she learned her lesson: it is better to go to the taquitos on the corner.