VRAIOUFAKE. Abortion: has the presidential majority challenged in the past two texts proposing to include abortion in the Constitution? 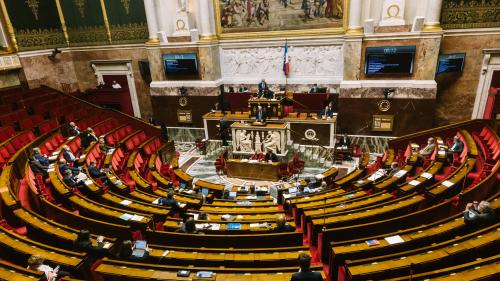 Like a deja vu. The Renaissance group (ex-LREM) in the National Assembly had barely finalized its bill to inscribe the right to abortion in the marble of the French Constitution, Saturday June 25, that the elected representatives of the opposition fell on him. The left criticizes the majority for having taken up a proposal already formulated twice during the previous legislature (and which the majority itself had rejected).

The deputy La France insoumise (LFI) Bastien Lachaud did not fail to point out on Saturday that his movement had not waited for the Supreme Court of the United States to revoke this constitutional right to propose to protect the voluntary interruption of pregnancy (IVG ) in France. “LREM had refused the inclusion of the right to abortion in the Constitution in 2018 when La France insoumise had proposed it”, writes the elected representative of Seine-Saint-Denis on Twitter.

Let’s rewind. In July 2018, an amendment (the n°1115) carried by LFI proposes to insert in the Constitution the right to abortion. It is rejected on July 11 in the National Assembly. In total, 145 deputies voted against (37 for, 14 abstentions). Among them are 100 elected LREM officials, including Gabriel Attal (current Budget Minister), Brigitte Bourguignon (Minister of Health) and Olivia Grégoire (government spokesperson). We also find the name of Yaël Braun-Pivet, now the majority candidate for the roost. “This protection requires a constant fight in our public policies and in our legislation, as well as careful monitoring of the respect of these rights, and not by their inscription in the Constitution, which is neither necessary nor useful” , reacted then the current Minister of Overseas.

“There is no need to brandish fears.”

to the National Assembly

The Keeper of the Seals at the time, Nicole Belloubet, who also spoke in the hemicyle, did not say anything else: “We have a sufficiently guaranteed right, recognized by the Constitutional Council as a component of freedom of woman”.

️Small reminder to the attention of journalists in particular who may have escaped the 2018 debates on the constitutional reform and the proposal for @FiAssemblee rejected by the macronists including the probable future president of the Assembly then rapporteur.#RoeVsWade #abortion https://t.co/Drmy1AQsY1

A year later, in July 2019, another attempt. A constitutional bill, carried by deputies on the left, is filed to, again, include abortion in the Constitution. “I see what is happening all over the world, in Europe, with for example the Hungary of Victor Orban, who since 2013 has questioned this fundamental right in the Constitution. And what we say, with my colleagues, is that in France, despite all these advances since the Veil law, there is unfortunately not an offense of obstruction as one can understand by law, but a form of obstruction today for all these women who resort to abortion”, then underlines Luc Carvounas, at the time socialist deputy and member of the delegation of the National Assembly for women’s rights.

But again, it doesn’t work. In question: the presidential majority did not want to put the initiative on the agenda, as Luc Carvounas explains to franceinfo. “I remember very well. We made this initiative coincide with the first anniversary of the pantheonization of Simone Veil”, explains to franceinfo the current mayor of Alfortville (Val-de-Marne) who continues, a bit teasing: ” I see that we are taking up our idea… If the deputies of the majority wish it, the text is ready, it is in the boxes. I do not want to get into an argument: if our work can be useful now, it is very good”.

Why did the majority reject this proposal in 2018 and finally (re)propose it four years later? Solicited, a LREM deputy from the west of France, who had voted against at the time, tries an explanation: “It was in 2018 an amendment for a bill whose title was: ‘For a more representative, responsible and efficient democracy’. Apart from the fact that the amendment was, in my opinion, irrelevant to the objective of this bill, in my opinion it required a specific debate in the hemicycle because the subject [le droit à l’avortement] is far too important to discuss in a few minutes.”

In the ranks of LFI, this change of mind makes you smile. The elected representative of Seine-Saint-Denis Clémentine Autain, who said in 2018 “not to understand why there is blockage on the side of the government and the majority to have an element adopted which normally should obtain a broad consensus”, evokes “a welcome change” because “the right to abortion is a fundamental right”. “Better late than never,” agrees another LFI parliamentarian to franceinfo. “But what bothers me more is the recovery side.”

A patching up is however still possible between one and the other. The Nupes, the new left-wing alliance, now proposes to file a common text for all the parliamentary groups who wish to include abortion in the Constitution. As a symbol, this could be one of the first transpartisan texts adopted during the new legislature, after several days of political crisis since the second round of legislative elections.