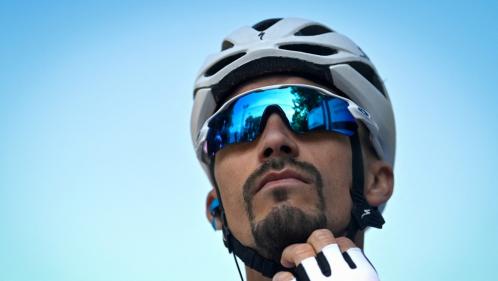 One week before the start of the Tour de France 2022, Julian Alaphilippe took stock at the microphone of France Télévisions during the French championships in Cholet, Saturday June 25. His team (Quick-Step Alpha Vinyl) must announce at the beginning of next week the participation or not of the double world champion on the Great Loop.

The wearer of the rainbow jersey has not pinned a bib since his severe fall (hemopneumothorax and multiple fractures of the ribs and a scapula) two months ago during Liège-Bastogne-Liège. “Alaf” was only able to complete three weeks of training before the road race for the French championships, Sunday June 25, which will mark his return. The 30-year-old runner looks back on the events that marked his two months of recovery.

How are you feeling physically and mentally heading into your first race in over two months?

Julian Alaphilippe: The predominant feeling is still excitement. I’m super happy and impatient to get back to racing, to have a bib on my back and to simply run. I can’t wait to get back to the peloton’s energy and nervousness.

Physically, I’m not bad. From the moment I was able to get back on the bike, I left for a long internship to be able to really get back into a bubble and find the rhythm. To go from there to saying that I am immediately competitive and ready is a bit of an unknown. I don’t know, we’ll see.

I am clearly here to please myself, to see where I am physically after long weeks where there have been ups and downs. I was still able to work well, but there were also some setbacks in my preparation. I’m here [aux championnats de France] primarily to test myself. The result, whether it is there or not, it will not change anything.

What was the hardest thing after your crash at Liège-Bastogne-Liège?

Besides the fact of having suffered a lot, it was difficult to realize the sequence of bad luck that I had since the start of the season. I was sick, I fell, I had setbacks… I realize that it’s been a really rotten year in sport. Personally, I didn’t have a lot of fun on the bike, and I didn’t get a lot of results either. This year, my victory in the Tour of the Basque Country is almost anecdotal compared to my performances over the past few seasons.

During my preparation, I was able to realize that I was apprehensive, especially on the descents. That’s why I can’t wait to get back to competition and the automation that goes with it. Only in racing can you measure yourself against all these factors. There are always complicated moments in a career. It was my biggest “fart”. But the hard part, I don’t think about it anymore. I gritted my teeth and did my best to make my recovery go well.

What helped me the most in all of this was my little Nino [son fils de moins d’un an]. When I was on my hospital bed, I just wanted to get up and find him. From the moment I was able to return and I was able to take advantage of him, these are the moments that gave me strength to move forward and above all that prevented me from “twisting”.

How do you envision the rest of the season?

Now I’m moving forward. I tell myself that the season is not over and that I still have great things to do. The Tour de France, I want to do it. Now the selection [au sein de son équipe Quick-Step Alpha Vinyl] also happens above.

Beyond that, there are always races that I dream of winning. By the end of the year, I hope to be 100% for the world championships [du 18 au 25 septembre en Australie] but also the Tour of Lombardy [en octobre]. Next year, I will try to aim for the Tour of Flanders rather than focusing on the Ardennes classics.