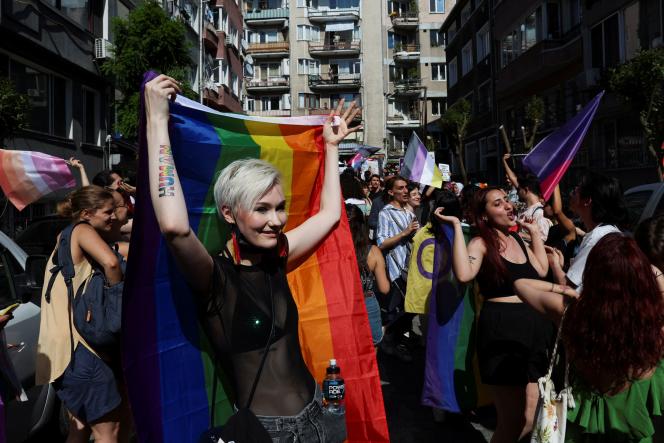 The Turkish police continue their attempts to intimidate LGBT + people (lesbians, gays, bisexuals, transgender…). The police once again melted down on Sunday, June 26, on the Istanbul Pride March, banned by the authorities, bluntly arresting more than 200 people, activists and journalists, including a photographer from Agence France- Press (AFP).

Even before the rally began, riot police raided cafes and streets in the Cihangir neighborhood around the iconic Taksim Square, arresting those found there, AFP found.

According to the count of the organizers of the march, some 200 people in total were apprehended in several waves. Amnesty International called for their “unconditional and immediate release”. According to several witnesses, the police tried to prevent the press from filming the arrests.

Bülent Kiliç, an experienced and award-winning photographer for Agence France-Presse, accustomed to conflict zones, was handcuffed behind the back, had his T-shirt ripped off and was taken with others aboard a van police. Around 11 p.m., more than six hours after his arrest, the photographer was released, along with other demonstrators. Twelve people were also arrested in the city of Izmir (west), according to Kaos LG.

He had already been arrested in 2021 in the same circumstances. On Twitterthe press defense organization Reporters sans Frontières (RSF) regretted that the Turkish authorities seem “to have gotten into the habit of arresting AFP photojournalist Bülent Kilic”.

“Despite three convictions pronounced by the Constitutional Court over the past three years, the security forces continue to commit violence and arbitrary detentions against journalists. Unfortunately, the administration has gotten into the habit of disregarding court decisions or the law,” added RSF representative Erol Onderoglu.

The Istanbul Pride March, the first edition of which took place in 2003, has been officially banned since 2015 by the governor of the city, officially “for security reasons”, after a spectacular parade in 2014 of more than a hundred thousand people in Istanbul.

This year again, hundreds of demonstrators defied this ban, waving rainbow flags in the streets adjacent to the famous Taksim Square, which is completely closed to the public. Singing “The future is queer”, “You will never be alone”, or “We are here, we are queer, we will not disappear”, the demonstrators then marched for a little over an hour in the streets of the Cihangir district, supported by local residents posted at the windows.

Also read the analysis: Article reserved for our subscribers In Turkey, the anger of a youth who has known nothing but Erdogan

“They try to ban us, to prevent us, to discriminate against us and even to kill us every minute of our existence,” Diren, 22, told AFP. “But today is an opportunity to defend our rights, to shout that we exist: you will never be able to stop queers,” adds Diren, using the term that designates any form of altersexuality and refutes the biological definition of gender.

On Friday, the European Commissioner for Human Rights, Dunja Mijatovic, had called on “the Istanbul authorities to lift the ban in force on the Pride March and to guarantee the safety of peaceful demonstrators”. “The human rights of LGBT people in Turkey must be protected”, she added, calling for an “end to [leur] stigma”.

Homosexuality, decriminalized in Turkey since the middle of the 19th century (1858), is not prohibited, but it remains largely subject to social opprobrium and hostility from the ruling Islamic-conservative party, the AKP, as well as that of the government of President Recep Tayyip Erdogan. A minister had, in the past, called homosexuals “crazy”.

In 2020, the Netlix platform, which planned to produce a series in Turkey featuring a gay character, had not obtained the green light from the authorities and had been forced to give it up. The same year, the French brand of sports equipment and clothing Decathlon had been the subject of calls for a boycott in the country for having conveyed, in its campaigns, messages of support and tolerance for the LGBT + communities.

Read also: Article reserved for our subscribers In Turkey, President Erdogan is increasingly repressing his opponents