The minors were rescued in Piura, by police intervention. | VIDEO: ATV

The case of the minors abducted by their father reached a conclusion. This Saturday it was reported that Ximena Vidaurre, mother of the 3 and 4-year-old girls and who denounced the incident in Lima, managed to reunite with her daughters in Piura. The National Police in a department in the city carried out the operation and managed to find the subject.

Katya Guerrero, lawyer for Pedro José Labarthe Onrubia, the girls’ father, who had been accused of taking them with deception, stated that Vidaurre arrived at the property with the troops and proceeded to hand over the minors without any act of violence and that This Saturday both adults will meet to reconcile.

“The lady has arrived at the apartment and we have been talking, but I don’t know why she came to call the Police. We are here in the Divincri. Tomorrow they are going to meet for the issue of conciliation”said.

However, the ATV news reported that the girls’ father tried to jump from the seventh floor of the luxurious apartment where he was staying.

As reported in other media that received the images of the rescue, the house where the minors were was located in a condominium in an exclusive area of ​​the Piuran district of Castilla. The Police arrived at the scene and mounted an operation, simulating a drill to prevent future trauma to minors.

Once inside, the Police put the infants in a safe place and they returned to their mother. According to América Noticias, José Labarthe Onrubia was transferred to the Dirincri de Piura together with his lawyer. 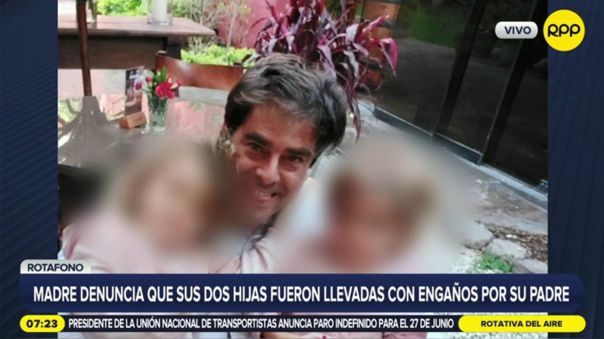 As it is recalled, last Thursday, Vidaurre denounced that his ex-partner took “with trickery” his two youngest daughters. He pointed out that the disappearance of her daughters occurred on Tuesday, June 21 and since then he had been looking for them by his own means. He also said that she was afraid that Pedro José Labarthe Onrubia would take them out of the country.

“He took my daughters Diane and Micaela at 11:40 am on Tuesday June 21 in the direction of Piura (12 hours of travel). The complaint was made at 1:37 pm at the Orrantia del Mar (San Isidro) police station, but no police checkpoint stopped the vehicle (where José Onrubia was going) despite the fact that the complaint indicated that he would take that route and despite that I did not have any identity document for my minor daughters. Nor did he have a driver’s license or a car ownership card, ”he denounced.

The woman assured that her ex-partner did not have any document authorizing him to take the girls, since she was the one who had custody. In addition, she assured that the man left Lima without documents or license, so she did not explain why the Police had not arrested him until that moment.

“He does not have any documents for my daughters, he has left Lima without documents, without a certificate, without an ID. He doesn’t have a license because it was taken away for drunk driving many years ago. (…) The authorities have not done anything, they have not carried out any control and there is a complaint”he said at the time.

Once the complaint was made public, Migrations ruled on the case and published a statement on Twitter. In this message they assured that “The informative alert has already been sent to our Immigration or Border Control Posts” about this case and were taking the corresponding measures to avoid an eventual flight abroad.

On Wednesday, June 22, it was reported that both girls were located in a house located in an exclusive area of ​​Piura. However, the Police and the Public Ministry did not intervene because there was apparently no configuration of a crime.

Crime in Peru: 11 crimes are recorded every hour in the country, including robberies and aggravated assaultsSchoolchildren with special abilities are forced to study in appalling conditionsHe entered a house in Santa Rosa to rob and found himself face to face with the owner