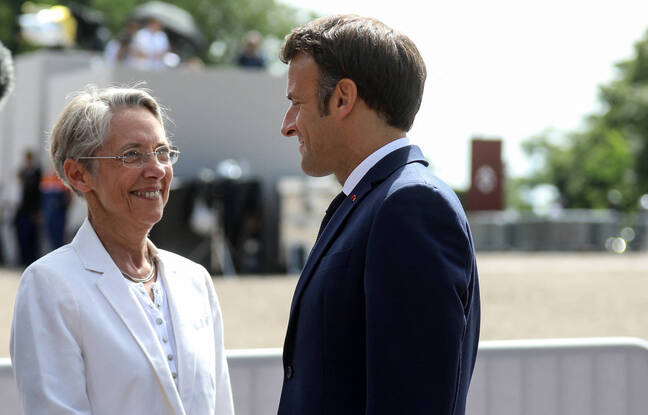 Soon new faces at the Elysée? Emmanuel Macron “confirmed” this Saturday his confidence in Elisabeth Borne and instructed the Prime Minister to conduct new consultations with parliamentary groups in order to form “a new government of action” for “early July”, he announced in an interview with AFP.

“Seeing both the refusals and the availability” which were expressed during the first exchanges with the political forces, “I decided today to confirm my confidence in Elisabeth Borne”, explained the Head of State then that the fate of the head of government had been the subject of speculation since the presidential address on Wednesday.

The President of the Republic, who spoke with the head of government this Saturday, announced that he had instructed her next week to sound out the political groups in the National Assembly on a “government agreement”, their very participation in a government, their position on a vote of confidence in Elisabeth Borne on July 5, and also on the vote on the state budget next fall.

“On my return from the G7 and NATO [qui se tient jusqu’à jeudi]the Prime Minister will submit to me proposals for a roadmap for the government of France over the coming months and years, and also for the composition of a new government of action at the service of France that we will put in place place in the first days of July,” he added.

Resuming the floor between two stages of his diplomatic marathon which takes him to Germany on Sunday for the G7 and then to Madrid on Tuesday for the NATO summit, Emmanuel Macron specifies that “the basis of these discussions” with the Prime Minister will be the “framework of the presidential project and that of the presidential majority which may be amended or enriched”. And this, with the red line of increasing “neither taxes nor debt”.

It is, with the reform towards full employment, “the two major reforms that we must carry out in consultation, without totems or taboos, but keeping a course of ambition”.

An agreement with RN and LFI?

The head of state, looking for reinforcements after losing an absolute majority in the Assembly last Sunday, however ruled out the possibility of an agreement with the RN and LFI.

The possible allies, “it will be communists in the LR. The French have granted legitimacy to the RN and LFI deputies and these parties have a political formation. I do not confuse the extremes but by their expression, their positioning – I have always been clear on this subject – these formations do not register as government parties”.