At the November 13 trial, Abdeslam’s defense closes the pleadings 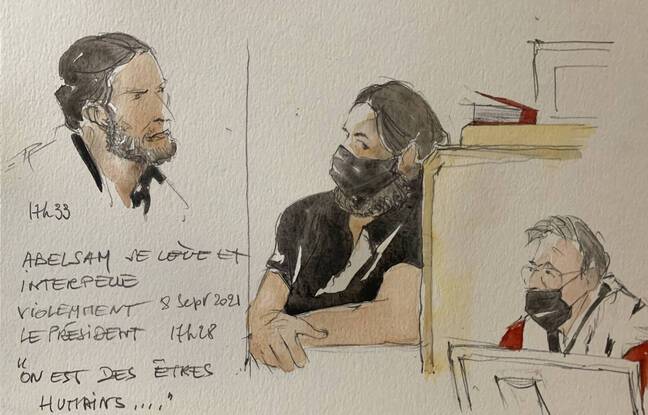 The National Anti-Terrorist Prosecutor’s Office (Pnat) demanded against the 32-year-old Frenchman the heaviest sentence of the Penal Code, incompressible life imprisonment. This sanction, rarely requested and pronounced only four times, makes the possibility of a release minimal. The public prosecutor had justified it “in view of the immense gravity of the facts”, but also of the personality of the main accused. He “remains convinced of not having killed anyone” and has adopted “a strategy of constant minimization of the facts, that is to say the change that he has yet to go through”, had advanced the Pnat.

Mutic during almost the entire trial

Faced with these requisitions, the lawyers of Salah Abdeslam, Martin Vettes then Olivia Ronen, should insist on the evolution of the former public enemy number one, more than six and a half years after the attacks and after long months of hearing.

The man who had proudly claimed on the first day of the trial, September 8, his membership of the Islamic State, had concluded his last interrogation, in mid-April, by shedding tears and apologizing “to all the victims”.

Remained silent during almost all of the instruction, the “tenth man” of the jihadist commandos who killed 130 people did not stop during the debates to affirm that he had “given up” killing on the evening of November 13 2015, refusing “out of humanity” to activate his explosive belt.

Salah Abdeslam had deplored in February the “extremely severe” sentences for terrorism. “The people who did not kill anyone, we cannot condemn them as if we had the heads of the Islamic State, it is not possible”, he had estimated. “I present no danger to society,” he added without batting an eyelid.

The defense of Salah Abdeslam, who admitted certain round trips to Europe to recover the commandos returning from Syria, the rental of cars and apartments, will not plead acquittal. But she should insist before the special Assize Court of Paris on this “renunciation”, which did not convince the prosecution and the possible amendment of their client.

Since the beginning of the defense pleadings on June 13, lawyers for defendants against whom life imprisonment has been requested for “complicity” – with 30 or 22 years of security – have warned the court against the temptation of a ” exceptional justice” with “elimination” sentences in response to mass crimes, the worst ever committed on French soil.

“Justice is not a weapon of anger”, urged Me Marie Violleau, one of the lawyers of Mohamed Abrini, “scheduled” for November 13 but who had given up, as he will do a few months later. in Brussels. “We demanded blood money,” protested Me Orly Rezlan, the lawyer for Mohamed Bakkali, who admitted during the investigation that he had rented hideouts and cars, and who is considered by the prosecution to be a “superintendent of terror”.

If the court were to condemn him to “equal to the assassin”, underlined Me Rezlan, “then it will be necessary to admit that the rule of law has melted under the shock and that only ‘a decor of cardboard’. The defense also fired its arrows against the controversial offense of criminal terrorist association, alleged against several “peripheral actors” or “little hands” of the file, which supposes to characterize it to have knowledge of a terrorist project and to join it.

The abandonment of the terrorist qualification was requested for some of the defendants. For others appearing free at the hearing, their lawyers demanded that they not return to prison, as required by the Pnat. Counsel for Yassine Atar, Ali El Haddad Asufi and Abdellah Chouaa pleaded for their acquittal, considering that only their bad associations link them to the case.

Before delivering its verdict on Wednesday at the end of the day, the court will give the floor one last time to the 14 defendants tried in their presence – six are by default – Monday morning.