War in Ukraine: what to remember from the day of Thursday, June 23 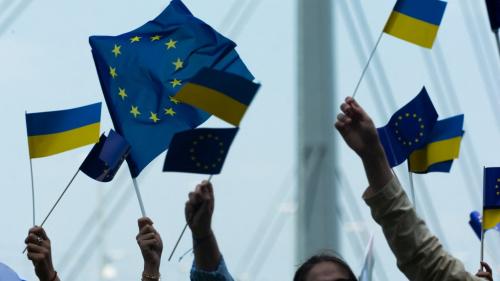 A highly symbolic step. The Twenty-Seven have granted Ukraine and Moldova the status of candidate for membership of the European Union. kyiv, which continues to suffer from Russian attacks near Severodonetsk, has also received substantial military aid from the United States. Franceinfo looks back on the highlights of the day on the war front in Ukraine.

Ukraine and Moldova officially candidates for membership of the European Union

It is a “historic moment” for the President of the European Council Charles Michel. The Twenty-Seven have granted Ukraine and Moldova the status of candidate for membership of the European Union. Never will opinions have been given in such a short time on a request for candidacy, an emergency due to the war waged by Russia.

Ukrainian President Volodymyr Zelensky hailed on Twitter (in English) “a unique and historic moment in Ukraine-EU relations”. Emmanuel Macron, who holds the rotating presidency of the Council of the EU (a separate body from the European Council), considered that this was a “very strong signal vis-à-vis Russia”. The Head of State, however, recalled that “the process that is embarking on will be demanding”.

It is indeed a highly symbolic stage for kyiv and Chisinau, but which only marks the beginning of a long and complex journey. The two countries will still have to put in place many reforms before officially integrating the EU, as the European Commission reminded us last week before giving its favorable opinion.

Russian troops have conquered the towns of Loskutivka and Rai-Oleksandrivka, located a few kilometers from Lysychansk, Luhansk regional governor Sergiï Gaïdaï admitted on Telegram. They also attacked Syrotyne, at the gates of Severodonetsk. Moscow’s forces “are stepping up offensives to encircle our troops,” the official said.

Ukrainian resistance in Lysytchansk and Severodonetsk is “futile”, said a representative of pro-Russian separatists. Sign of the difficulties of the Ukrainian army, the governor of the neighboring region of Donetsk, Pavlo Kyrylenko, told AFP that “no city” in the area was “safe” for its inhabitants.

kyiv announces the arrival of US Himars rocket launchers

Ukrainian Defense Minister Oleksiï Reznikov announced the arrival of American High Mobility Artillery Rocket System (Himars) rocket launchers in Ukraine, powerful weapons requested from the allies to deal with the Russian invasion. “The Himars have arrived in Ukraine. Thanks to my colleague and friend Lloyd Austin [secrétaire à la Défense américain] for these powerful tools”, rejoiced Oleksiï Reznikov on Twitterwho accompanied his message with a photo of this mobile rocket launcher system mounted on light armor.

“The summer will be hot for the Russian occupiers. And the last for some of them,” he threatened, without specifying how many Himars had been delivered by the Americans. The United States announced in early June that it would supply Ukraine with Himars systems with a range of 80 kilometers.

US announces $450 million in new military aid for Ukraine

This new aid package brings to “about 6.1 billion” the total amount of military aid provided by Washington to kyiv since the beginning of the Russian invasion, said John Kirby, who coordinates White House communication on strategic issues. He noted that this new assistance component will include in particular an additional delivery of Himars rocket launchers.

Faced with a 60% drop in gas deliveries from Russia, the country activated the “alert level” of the plan to secure its gas supply, bringing it one step closer to rationing measures. “Gas is now a scarce resource,” Economy Minister Robert Habeck told a press conference.

This is the second stage of the device on German gas supply, activated last March. The third and last stage of this plan, the “emergency level”, would allow the State to organize rationing to distribute the volumes between individuals, administrations, industry.

For the moment, reserves in Germany are at 58%, a level “higher than the average of recent years”. But if deliveries via Nordstream “remain at a low level”, filling the tanks for the winter is not guaranteed.

Russian shelling hit two agricultural terminals on Wednesday in the port city of Mykolaiv in Ukraine, their operators, the Bunge and Viterra trading houses, told AFP. The Evri port terminal, dedicated to vegetable oils, was “damaged by a missile attack”, said a spokesman for the Viterra group.

Bunge’s facilities were “hit in the latest Russian attacks in the region”. The Russian army also announced that it had destroyed 49 fuel reserves and three armored repair centers. For now, the exact extent of the damage is not yet known.