Mortgage interest increased to an average of 4 percent | NOW 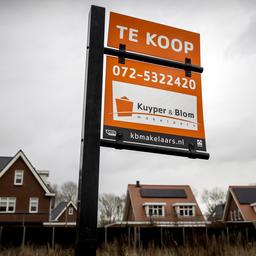 The average of all mortgage interest rates offered today is 3.96 percent. Nearly all lenders implemented hefty increases this week.

The rise in mortgage interest was almost as big as last week’s record, says De Hypotheekshop in an analysis. Ten lenders even adjusted the interest rate two or three times, as a result of which customers who are busy buying a house are confronted with significantly higher monthly payments. The average interest rate is almost 0.3 percentage point higher than at the start of the week.

The lowest point was reached in September at 1.42 percent. Many mortgage interest rates are now three times higher than they were then. It certainly saves 15,000 euros on the borrowing capacity for an owner-occupied home with an average price of 400,000 euros. The gross monthly costs can be several hundred euros higher, depending on the conditions, but the mortgage interest deduction ensures that the costs do not fly out of control.

However, there is already some noticeable effect on the housing market. Figures from Makelaarsland, which sells thousands of houses every year, show that there are fewer viewings and bids. The Central Planning Bureau is even taking into account a possible fall in house prices, mainly caused by the rise in interest rates.

The cause of the rising mortgage interest is the higher interest on the capital market, where banks and other mortgage lenders get their money to finance a house. Capital market interest rates are stabilizing, but that also happened a few weeks ago. The Mortgage Shop points out that there is a lot of uncertainty due to the war in Ukraine, the supply of fuel from Russia and possible intervention by the central banks to prevent the economy from boiling over.

The number of home buyers who have interest rates fixed for ten years is increasing. In this way they keep the monthly costs in check to some extent. Until six months ago, the fixed interest rate for twenty years was still the norm. Consumers more often end up with one of the major banks. They are more focused on attracting and investing money with a shorter term than insurers and pension funds. These usually involve long-term obligations.