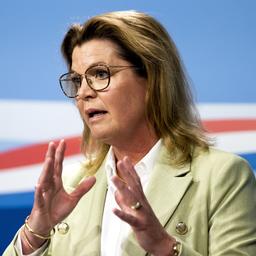 Politicians from the governing parties VVD and CDA have to do all kinds of things to underline the “inevitable” agreed nitrogen targets, while at the same time meeting the dissatisfied supporters. An almost impossible split. Today, the House of Representatives is debating the cabinet’s nitrogen plans.

The balancing skills were best seen with the agricultural spokesman of the VVD, Thom van Campen.

He could “get started” with what was in the party motion to adjust nitrogen policy, but drew “a line” at the explanation where the nitrogen measurements were questioned.

Van Campen understood “the unrest very well”, he said at the VVD congress two weeks ago, but ultimately advised the VVD group not to adopt the position.

It seemed an impossible combination: standing squarely behind cabinet policy and at the same time sympathetic to the call for major changes to it.

The same struggle was seen at the CDA. The weekend after the nitrogen plans were sent to the House, it turned out that the party had revolted internally.

“We understand that we have to achieve those nitrogen targets and we understand that drastic measures are needed,” CDA party chairman Pieter Heerma said on Monday. That was no surprise, after all, his party had itself signed for the “inevitable approach for improving nature” in the coalition agreement.

“But,” Heerma continued, “the way should also be possible in other ways.” The CDA member was missing “crucial elements” in the plans, which in his opinion had to be adjusted “on a number of points”.

Here too, a ruling party was initially critical of its own plans, but did not question the ultimate goal. Heerma was even very clear about it. “There will be a reduction in livestock numbers because it’s part of bringing nitrogen down.”

Plans already offer room for your own interpretation

The space that both parties seemed to be looking for here has already been written down in the cabinet plans. Goals have been formulated for each area as to how much nitrogen must be reduced. It is now up to the provinces how these goals are translated into measures.

They have some freedom in this themselves, as long as there is “a prospect of concrete measures in a year’s time”, is the message from Minister Christianne van der Wal (Nature and Nitrogen). If not, she intervenes.

The RIVM, which has mapped out the percentages of how much nitrogen needs to be reduced where, was clear about this this week in a technical briefing to members of parliament. If you reduce less nitrogen in one place, you have to do more in another place.

You cannot draw conclusions at company level with that map, RIVM employees emphasized. There are guiding goals.

The cabinet is clear about the ultimate goal: 50% less nitrogen emissions in 2030 compared to 2018. This means that three quarters of the Dutch nitrogen-sensitive nature areas must be below the critical limit value, so that the nature there does not deteriorate further.

Despite the uproar in her party and the intimidation of farmers who came to visit her at home, Van der Wal, herself from the VVD house, has made no mistake about the fact that those goals will remain intact.

As a result, the cabinet comes with “the painful observation” that a number of farmers will have to stop. This will especially be the case near protected nature reserves, where nitrogen emissions must be reduced by 70 to 95 percent. “Not everything can be done everywhere and it can no longer be the way it used to be”, is Van der Wal’s clear message.

The nitrogen targets are not up for discussion, the debate today will mainly be about the polarization that is only increasing due to the protests and the measures. For security reasons, some MPs were advised not to attend Wednesday’s farmers’ protest in Stroe.

The fire had already been kindled. “The State of the Netherlands is at war with the peasant republic,” said Bart Kemp, foreman of Agractie.

ChristenUnie leader Gert-Jan Segers fears a civil war, but “in a civilized way”.

It will become clear whether that war language seeps through in the House of Representatives.