Saint-Étienne gets three points deducted for chaos after relegation | NOW 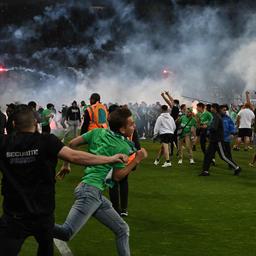 Saint-Étienne starts the new season with three points deducted and has to play its first four home games without an audience. The record champion of France will be punished by the French disciplinary committee for the chaos after being relegated from Ligue 1.

Saint-Étienne was relegated from Ligue 1 at the end of May after eighteen years, after which it all went wrong at Stade Geoffroy-Guichard. The field was stormed en masse by angry fans.

Saint-Étienne lost in the return play-off for survival on penalties from AJ Auxerre, after the match ended in 1-1 after both regular time and extra time.

Things got completely out of hand after the decisive penalty. Supporters stormed the field and threw fireworks and objects into the crowd. The players and staff members fled into the catacombs. Supporter riots have been a theme in France for some time, where things regularly went wrong in stadiums in recent years.

Saint-Étienne is a ten-time national champion and shares the record number of league titles with Paris Saint-Germain. The club was last champion of France in 1981.

For Saint-Étienne, the new season in Ligue 2 starts on July 30 with an away game against Dijon.