NUcheckt: Without a farmer, hunger in the Netherlands is not yet lurking | NOWchecks

NUcheckt checks messages for their reliability. This time we look at the slogan ‘No food without farmers’, which is often used in various variants around demonstrations by farmers against the government’s nitrogen policy. However, farmers in the Netherlands produce only a limited part of the food that the Dutch eat.

First and foremost, the slogan ‘No food without farmers’ should of course be taken with a few grains of salt. There is only limited space on protest signs, and the somewhat more nuanced slogan “Without farmers we have to adjust our food consumption, but no one dies of starvation” simply doesn’t sound as good.

The farmers’ protests are aimed at the government’s plans to tackle nitrogen emissions in the Netherlands. The cabinet wants to buy out farmers because they contribute significantly to the nitrogen outstanding. Many farmers therefore fear for their future.

How many farmers are there?

According to the most recent figures from the Central Bureau of Statistics (CBS) there were 53,233 farms in 2019. At the time, farmers made up about 0.6 percent of the total Dutch working population.

The number of farmers has already fallen sharply in recent years, with no long-term negative impact on the food supply. In the past twenty years, the number of farmers in the Netherlands has even halved. According to the CBS, in 2000 there were still 97,390 farmers.

Since 2019, farmers have been organizing protests against the government’s intention to reduce nitrogen emissions and limit livestock farming. Several times farmers went on their tractors to the Malieveld in The Hague to demonstrate ‘in front of the government’.

That the farmers mean business was once again apparent from their response to the cabinet’s latest nitrogen plans, which were announced earlier this month. For example, a delegation of farmers visited Minister Christianne van der Wal (Nature and Nitrogen) at home and an estimated 20,000 farmers were present at the protest in Stroe last Wednesday. There too, the slogan ‘No food without farmers’ came up regularly. About 70 percent of the food produced by Dutch farms is exported abroad. About 30 percent is intended for the Netherlands itself.

According to the annual research of Wageningen University & Research (WUR) and Statistics Netherlands, commissioned by the Ministry of Agriculture, Nature and Food Quality, in 2021 EUR 104.7 billion worth of agricultural goods was transported abroad. As a result, agricultural exports exceeded 100 billion euros for the first time. The Dutch economy earned in 2021 an estimated EUR 46.1 billion in agricultural exports.

Most agricultural exports went to Germany, which accounted for a quarter of the total with 26.3 billion euros. Much was also exported to Belgium, France and the United Kingdom.

At the same time, the Netherlands is already dependent on the import of food, such as dairy and meat. It is not so much about cartons of milk, but more about processed products such as biscuits and sausage, according to the Netherlands Environmental Assessment Agency (PBL).

According to research by WUR and CBS, the import of agricultural goods in 2021 amounted to 72.5 billion euros. Here too, Germany, Belgium and France are our most important partners. The amount of land needed to provide for Dutch consumption (of citizens and government) is also referred to as the land footprint. Most of the land (about a third of the Dutch footprint) is needed for growing food.

In 2019, the PBL calculated that 1,800 square meters per Dutch person is needed to grow enough food. This is also according to the Compendium for the Living Environment (CLOE) amounts to about three times the land area of ​​the Netherlands.

More than 80 percent of the Netherlands’ land footprint is therefore located abroad, about half of which is within the EU. This varies from, for example, grain from France to soybeans from Brazil. In particular, potatoes, grains, fruit, edible oil and sugar are imported from elsewhere in Europe.

Some products do have to be imported from abroad, because the Dutch soil is less suitable for their production. The Netherlands itself grows relatively many vegetables, which are intended for both domestic consumption and export.

The Netherlands therefore has enough agricultural land to feed its own population, but that land is largely outside our own national borders. 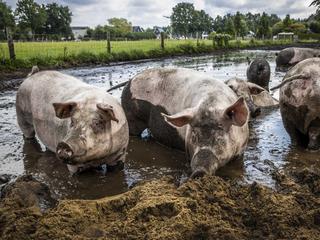 See alsoThe facts at a glance: what exactly is nitrogen, and what is the problem?

Farmers in the Netherlands play an important role in the production of food. However, it is not the case that the Dutch have to fear food shortages or even hunger if there are fewer farmers. This is because the vast majority of what farmers produce is transported abroad.

Even if there are fewer farmers or if they produce less food, there will be more than enough left over to provide the Netherlands with food. This is because the Netherlands also imports a lot of food from abroad.

In any case, the Netherlands is not big enough to meet the total Dutch food consumption, so we will have to continue to import food from abroad with our current diet.