Con more than 55 years of business experience, Raymundo Gómez Flores defines himself as a man thrown forward, who did not give up when there were headwinds.

In recapitulating the years of work, the prominent Jalisco businessman emphasizes having ventured into the real estate and services sector, as well as politics. But he does not forget his first job as a maintenance assistant for fountains and monuments in the Department of Parks and Gardens of Guadalajara.

Partner and founder of companies such as Minsa, Dina and GIG, refers that the recurring crises in the country’s economy are still areas of opportunity and possibilities that can be capitalized. “The road is made by walking, there is no crisis that can hold you 24 hours of daily work. Depending on the size of the crisis, put more work into it, it will take a little longer, but you will solve it”.

This Thursday, the Government of Jalisco will present Raymundo Gómez Flores with the “René Justin Rivial León” recognition, for his business career and for being an example of inspiration, excellence and leadership.

“In these years I was whole for what is offered. As my grandmother used to say, I am who I am and I don’t look like anyone. Water I ask my God and the water carriers not even that”.

This Thursday, June 23, the Government of Jalisco will grant the “René Justin Rivial León” recognition, for his business career and for the economic and social development of Jalisco.

Looking ahead to the 2024 electoral process, the former senator hoped that there would be good candidates with defined projects and that they be clear that “changing” the country’s situation is very complicated.

Family is the cornerstone of success: Raymundo Gómez Flores

Teamwork with the family has been the basis for business success in different sectors, considers Raymundo Gómez Flores. He remembers that in 1968 after the death of his father Alfonso Gómez Somellera, he assumed responsibility for the family businesses, which consisted of the Panoramex company, with a truck that made tourist tours, as well as the Roma laundry.

“All the brothers, we are eight, organize ourselves. In a very natural way, each person was taking on responsibilities of the size of his possibilities and developing different areas of the business, so that we all functioned as a team and achieved it”.

The businessman stressed that work is another element of business success. He explains that with the sale of some family properties they had “seed capital” to start real estate developments, a sector in which he said they stood out based on effort and ingenuity. Among his innovations is that they developed projects at better prices and better infrastructure. They entered other real estate sectors, such as the development of industrial parks and tourist complexes.

Gómez Flores emphasizes that the stage of privatization of public companies, during the six-year term of Carlos Salinas de Gortari between 1988-1994, was an opportunity for expansion, as they participated in various processes and, although they were not favored in some, managed to win the adjudication of the Almacenadora Centro Occidente , that turned into a successful and exemplary business in the field. They also acquired the brand and assets of Minsa.

“Like everything, there are winds in favor and against. And we follow the brothers who make the company that remains family and successful. I have some personal characteristics, but it would not have been the same if it had not been complemented by my brothers Alfonso, Armando, Guillermo and Rafael. It would have been very difficult to consolidate the complete model”, therefore, the family is the cornerstone of success.

Regarding the recognition that the Government of Jalisco will give him, the businessman says that in general he is reluctant to accept this type of tribute. He specifies that He accepted because it is a badge that bears the name of businessman René Justin Rivial, with whom he identifies as a “man who is a product of the culture of effort.”

“I would have liked to be governor or mayor of Zapopan”

Although he points out that his incursion into politics took place abruptly and without intention on his part, former senator Raymundo Gómez Flores comments that he would have liked to be the municipal president of Zapopan or governor, positions to which he aspired, but said that, after Evaluating all the circumstances, he decided not to delve too deeply.

“Yes, I would have liked to be the municipal president of Zapopan or to be governor, but it takes time, channeling life for that and a series of things. The truth is that I said: this water is not for me… and better not to get involved. Above all, in terms of security and because of my personality, I think my whole family would be put at risk.”

On his passage through the Senate of the Republic highlights the elaboration of the Federal Housing Law, the declaration of a natural reserve zone of the Lerma-Chapala-Santiago-Pacific Basin and because it participated in the works for the commemoration of the Bicentennial of Independence and the 100 years of the Revolution. He emphasizes that the current governor is doing interesting things and considers that he has the material to aspire to the presidential candidacy, but he must assess the support he has and how the national scene is moving. Of the current state administration, the conclusion of Line 3 of the Light Rail and the start of works for Line 4 to Tlajomulco stand out. He explains that mobility is a priority. Finally, he adds that there will be plans that he will not be able to finish. 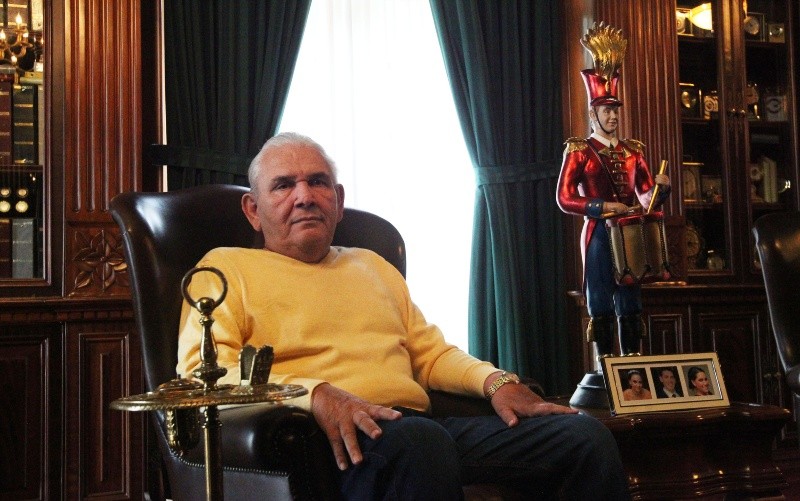 The family union allowed them to face adverse conditions. THE INFORMER. camacho

The trajectory and innovation

Raymundo Gómez Flores was born on June 24, 1952 in Guadalajara. He is the second of eight children of the marriage of Don Alfonso Gómez Somellera and Doña Altagracia Flores Fletes.

He has been distinguished with the Recognition of Industrial Merit (CCIJ), the National Agrifood Award, the Eight Columns of Gold Award and the Recognition of the Pedro Sarquis Merrewe Foundation. He also received the Obras Cemex award.

GIG has made more than 138 housing, industrial and tourist real estate developments in more than 16 states in the country and in the United States.

Businessman consolidated the first business model for tourist bus transportation services with regular frequency in the region. It opened the Guadalajara-Jocotepec-Ajijic-Chulavista-Chapala, and Guadalajara-Arenal-Tequila-Magdalena routes.

He participated in the privatization of public companies, where among other things he obtained the Minsa brand and assets.

As a senator, he finalized the decree that declared the Lerma-Chapala-Santiago-Pacific Basin as a Zone in Ecological Restoration and Water Reserve. In addition, he was one of the creators of the current Housing Law.

In order to redistribute the country’s wealth, a tax reform and adjustments to the fiscal regime are necessary, affirmed the Jalisco businessman Raymundo Gómez Flores, He considers that the subject tends to scare businessmen and argued that measures such as tax impositions on inheritances should be applied.

“You have to do things that scare, particularly businessmen. The best way to distribute wealth is through the tax system and it is something that we do not like, nobody likes to pay more taxes, but there is no other way”.

Questioned about the management of President Andrés Manuel López Obrador, he points out that in general terms it has been good, or at least not as bad as his detractors point out. The businessman indicates that an administration with the profile of the current one was necessary to curb neoliberal policies.

1952. He was born on June 24 of that year in Guadalajara. He is the second of eight children of the marriage of Don Alfonso Gómez Somellera and Doña Altagracia Flores Fletes.

1981. He founded the company GIG, which has carried out more than 138 residential, industrial and tourist real estate developments in more than 16 states in the country and in the United States.

1993. He participated in the privatization of public companies, where among other things he obtained the Minsa brand and assets.

1996. He is a founding partner of companies such as Dina, AP Solutions and Almer.

2014. As of 2014, he served as Senator of the LVIII and LIX Legislatures of Congress representing Jalisco. As senator of the Republic, he finalized the decree that declared the Lerma-Chapala-Santiago-Pacific Basin as a Zone in Ecological Restoration and Water Reserve. In addition, he was one of the creators of the current Housing Law.

2016. It was distinguished with the Recognition of Industrial Merit (CCIJ). Other recognitions received include: the National Agri-Food Award, the Presea Eight Golden Columns and the Pedro Sarquis Merrewe Foundation Recognition and the Cemex Works award. 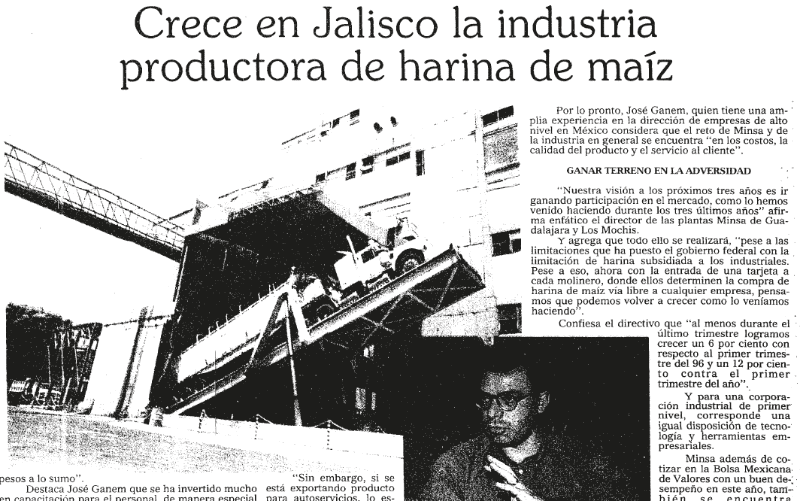 August 13, 1997. Grupo Minsa is positioned as the second largest producer in the country. 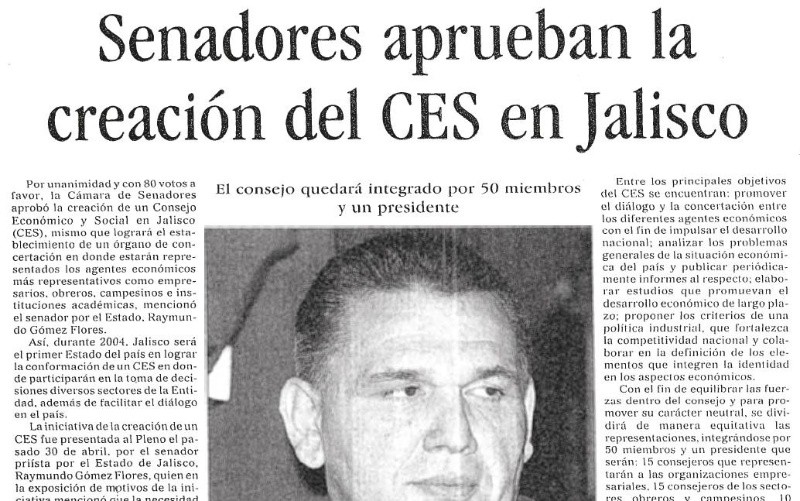 December 16, 2003. Raymundo Gómez participates in the creation of the Economic and Social Council. 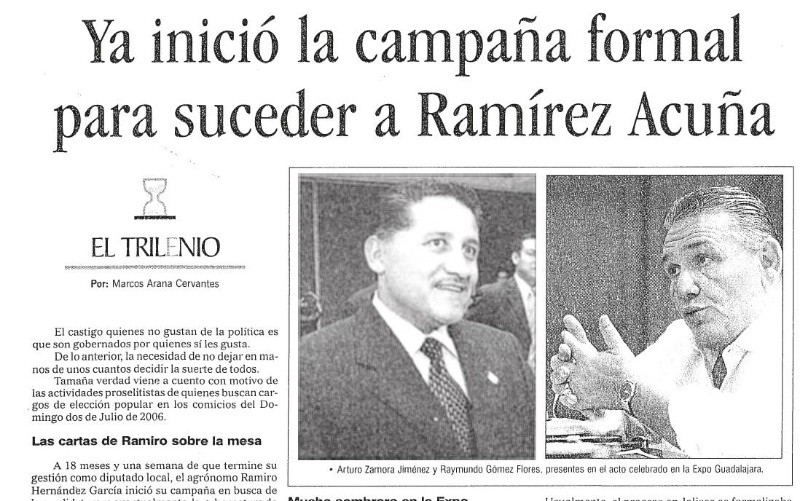 July 25, 2005. Raymundo Gómez is emerging as a candidate to compete for the governorship.

What do you think of the trajectory of Raymundo Gómez Flores?