The moon is on a collision course with our planet moonfall (2022). Can astronaut Brian still save the world? The disaster film with Halle Barry and Patrick Wilson can finally be rented on demand via Pathé Thuis from today. Moonfall can be seen via here.

In 1969, when Apollo lost contact with Earth for two minutes during the historic moon landing mission, the astronauts saw something they had been hiding for 50 years. Now, when the moon collides with something mysterious that sends it out of orbit and puts it on a collision course with our planet, NASA executive and former astronaut Jo Fowler (Halle Berry) is convinced she can save the Earth from destruction. She embarks on a final mission into space with two allies. But the moon turns out not to be what we thought…

The disaster film is directed by Roland Emmerich, known for his films Independence Day (1996), The Day After Tomorrow (2004) and 2012 (2009). The lead roles are played by none other than Halle Berry, Patrick Wilson, John Bradley, Michael Peña, Donald Sutherland and Charlie Plummer. 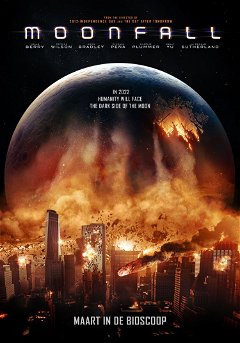 5.2 Watch Pathé Thuis (€4.99+) • In ‘Moonfall’, the moon collides with something mysterious and puts it on a collision course with our planet. It is only a matter of weeks before the collision will completely wipe out life on our planet.

Moonfall can now be seen via Pathé Thuis. You can now rent the film from €4.99. Need more inspiration? Check out our Top 100 best films on Pathé Thuis.