José Noriel Portillo, alias “El Chueco”, identified as the alleged murderer of Jesuit priests Javier Campos Morales and Joaquín Mora Salazar, as well as a tourist guide, It has been seen in the Chihuahuan regions of Cerocahui, Bahuichivo, Porochi, Poblado Rodeo and Uriquand, reported this Wednesday afternoon the Secretary of Security and Citizen Protection.

The agency reported that local and federal authorities activated a search cell to find the alleged regional leader of “Los Salazar”armed wing of the Sinaloa Cartel, in the southern Chihuahuan highlands, accused of the crime of aggravated homicide.

He indicated that, by agreement of the National Security Cabinet, a special operation is still deployed to search for him, in coordination with state and municipal authorities.

The Attorney General of the State of Chihuahua (FGE) offers a reward of up to five million pesos who or who provide information that leads directly to the capture of José Noriel Portillo Gil, alias “El Chueco”. 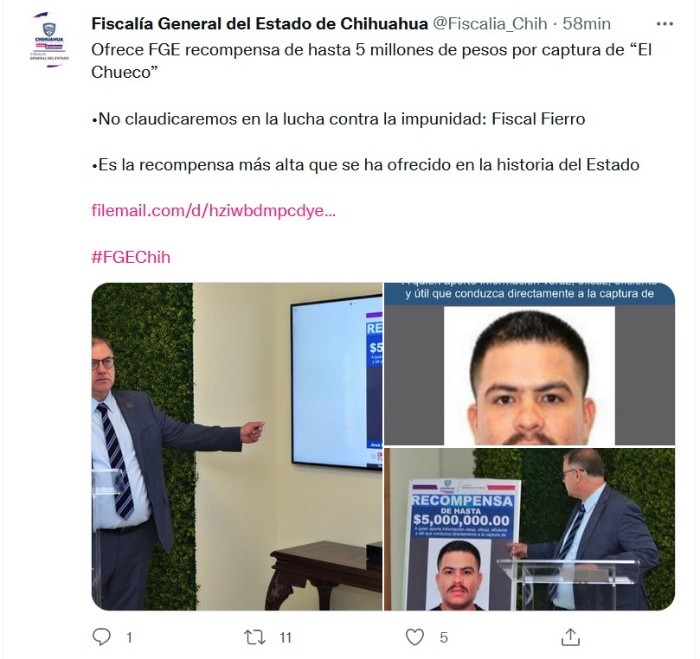 Officially, it was confirmed that this subject is charged the crimes of homicide, organized crime, and is also probably responsible for the events that occurred on June 20in the community of Cerocahui, municipality of Urique.

State authorities point out that this is the largest reward that has been offered in Chihuahuaaction with which society is given a voice, with the value of citizen denunciation and collaboration.