Mónica Ojeda, psychologist: “Adolescents use their sexual images as currency or as proof of love” 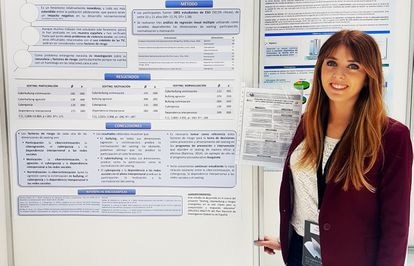 Mónica Ojeda Pérez, a specialist in the consequences of ‘sexting’, next to a reproduction of her research exhibited at a psychology congress held in 2017.

Why does this magnificent applied science, which saves labor and makes life easier, bring us so little happiness? Albert Einstein asked the question in February 1931 to students at the California Institute of Technology. Back then, the internet was still a dream and the physicist questioned the students about one of his obsessions: the human good as the goal of technological progress. “The simple answer is: because we have not yet learned to use it sensibly,” the scientist replied.

This reflection opens the investigation of Mónica Ojeda Pérez, a psychologist born in the Andalusian capital 30 years ago, about him sextingthe exchange of content of a sexual nature through the Internet, in adolescence. The work of Ojeda, who is now a professor at the University of Seville, where she is part of the research group on interpersonal aggression and socio-emotional development, has earned her awards from the Andalusian Studies Center Foundation (Centra), the Young Award for scientific culture and the Best Scientific Publication of Psychology of the University of Seville with youth participation. The researcher defends Einstein’s premise: the key is in the use made of technology, the key to being a door to happiness, misfortune or crime.

Q. But the sexting it is also beneficial.

R. That is the great dilemma. The sextingIndeed, it is like everything that surrounds us: there is nothing that is totally bad or good in general terms, but rather it depends on the use we make of it. The Internet brings us many benefits. Social networks, too. The sexting it doesn’t have to be bad. In fact, it has already been seen that it has positive consequences in certain relationships, for example, at a distance or that it helps to strengthen passion. But, like everything, it depends on the use that is made.

Sexting doesn’t have to be bad. In fact, it has positive consequences in certain relationships, for example, at a distance or helps to strengthen passion.

Q. When is it harmful?

A. The behavior that has been shown to be the most harmful is forwarding without consent, spreading that content beyond the intended recipient. I can have an agreement with my partner and do it in a private and consensual way, but the risk is that it will spread later. It is very harmful, especially for girls, because there is a term called “sexual double standard” that characterizes this phenomenon. Basically, it is that, for the same behavior, girls are socially judged much harsher than boys. That carries a greater emotional impact.

Q. Is it usual sexting?

A. One of the contributions of our research is that we have scientifically validated a questionnaire, the SBM-Q, to measure in detail the behaviors of sexting, both the sending and receiving of own content and the forwarding without consent and the reception of forwarding. Also the reasons. What we have seen is that 8.1% of adolescents send their own content, but it is very striking that 9.3% forward content from other people without consent. As we can see, it is not that it is common, it is not a practice that the vast majority carry out, but it is true that it is normalized and that, on many occasions, they see it as something normal in couples or among friends. Specifically, that percentage of forwarding without consent is worrying. We have also seen that 21.2% receive content of this type, for example, from their partner or intimate partner, but 28.4% receive content from other people without consent.

Q. Is it more common among teenagers?

A. The sexting increases as you grow. Adults do it more, but, clearly, in the evolutionary stage of adolescence, it carries much more risk because at that moment we know that our identity is still being formed, we are exploring sexuality and, in addition, there is a need to be accepted in the world. peer group. The social judgments that are made about the people involved affect their reputation and have very serious consequences, also damaging self-esteem. Therefore, the consequences can be more serious, even if adolescents do not do it more. Some studies raise to 50% or more the practice of sexting among emerging and older adults.

Boys are starting to view pornography at the age of eight. This contributes to normalizing the erotic-sexual content

Q. Why is it normalized among teenagers?

A. Different causes have been seen. On the one hand, they have access to pornography on the Internet earlier and earlier. The boys are beginning to visualize it at eight years old. This contributes to normalizing the erotic-sexual content. In adolescence it also happens that the peer group is very important and they come to use the sexting as a bargaining chip, especially in the case of boys. If you show photos of girls that have been sent to you, it increases your reputation in the group and your social status. In fact, if the images are of girls from your environment, it is much more relevant than if it is pornography. Many boys use it to increase their popularity and that helps make it part of the teenage culture. On the other hand, there is also exhibitionism on the internet or extimacy, which leads us to show private life, our most intimate side, on social networks. Everything is contributing.

Q. Is the sexting with bullying?

R. Victimization has been studied to a greater extent and it has been seen that there is a relationship between sending sexual content and later becoming a victim. In our study we have found that there is a significant relationship between being an aggressor and forwarding erotic-sexual content without consent. This forwarding behavior is more common among boys and has already become a new form of cyber violence, a new way in which bullies harm the victim.

Q. And with cyber gossip (cibergossip)?

A. It is important to know that gossip can be positive or negative, depending on the type of rumor being spread. It can be a way to strengthen social relations, but it is also negative if what is spread is harmful. Between sexting and cyber gossip there is a reciprocal relationship that has a lot to do with the need to be popular. It is very important to work on it from primary school because many times you are not aware of the damage caused by speaking negatively about other people.

Both boys and girls send their own erotic-sexual content, they do it equally, there are no significant differences. The consequences are not the same

Q. Does the sexting Is it more typical of men than women?

R. Both boys and girls send their own erotic-sexual content, they do it equally, there are no significant differences. It is true that, in the rest of the behaviors, reception or forwarding, boys do participate more. But they are the results of our research. In other studies it may vary because the context and culture influence it. What we are seeing is that the consequences are not the same. In most cases, the boy achieves that reputation and consolidation within his peer group, but in girls he is more complex due to the sexual double standard. They feel that they should be attractive and active on the internet, while being censored for it and judged socially. They are insulted and their reputation is damaged. On the other hand, they can also suffer from the pressure of the partner who asks for a photo. Many times, if they don’t send her, they think her partner will think that she doesn’t love him or that she doesn’t trust him. That is why, on these occasions, it becomes a test of love.

Q. Can it be done safely?

R. There is strong support from the scientific literature that we have to act on all behaviors. Clearly, we need to prevent forwarding without consent, which is the most harmful, but we also need to teach what to do if it is received. In addition, the first thing that someone who considers sending this type of content has to think about is if he really wants to. If you decide to send it, freely and without pressure, then you have to know how to do it safely. Just as it is taught in schools how to avoid sexually transmitted infections or an unwanted pregnancy, the importance of consent should be taught. We have identified 15 relevant lines of action, among which training in the safe and healthy use of technologies stands out, which are no longer just about information, but also about relationships, or working from a gender perspective. Although there is consent and trust in the other person, a series of recommendations must be followed. For example, try not to show anything in the image that can identify you, such as tattoos or marks. There are also applications that allow pixelar face or remove metadata, which includes personal information such as location. It is also necessary to use secure channels, with encryption or screenshot blocking or platforms that allow the message to self-destruct. It is important to delete the image and that the recipient also does so or assign a password, which is secure. The date of birth is not valid. In this way, we can contribute to healthy intimate communication and safe use of technologies.