Considered too protective of fossil fuels, the Energy Charter Treaty is contested from all sides 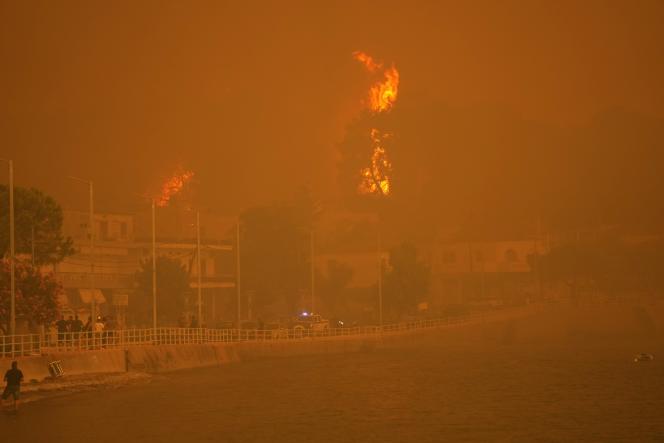 Fire burns trees near a beach in the village of Pefki, on the island of Evia, Greece, in August 2021. PETROS KARADJIAS / AP

Maya, 19, says she “lost her childhood” the night Hurricane Irma devastated the French island of Saint-Martin in September 2017. Julia, 17, lived through the floods in the valley of the Ahr in Germany, which killed more than 130 people, in July 2021. At the same time, in Chaudfontaine, Belgium, Damien, 23, “saw whole sections of his life disappear” under water. Just like Marion, 31, who was in Cressier, Switzerland, in June 2021. As for Alexandros, 21, since the fires which almost a year ago ravaged Athens, he says he is “afraid” that the fire starts “as soon as he sees pines under the sun”.

Until these weather disasters turned their lives upside down, none of them had heard of the Energy Charter Treaty (ECT). Identified by NGOs and associations specializing in young people and the environment, they have, Tuesday, June 21, filed a complaint before the European Court of Human Rights (ECHR) against twelve States – United Kingdom, Switzerland, France, Netherlands, Germany, Austria, Greece, Belgium, Cyprus, Denmark, Luxembourg , Sweden – signatories to this treaty.

Archives: Article reserved for our subscribers The Energy Charter Treaty, a threat to the European Union’s climate objectives

What is it about ? In the early 1990s, against a backdrop of the Gulf War and the collapse of the Soviet Empire, Europe was concerned about its energy supply and, in order to secure it, imagined an international agreement that would protect investors in this sector. and shield them from changes in energy policy.

The TCE was born, which allows them to ask, before an arbitration tribunal, for compensation from a State whose decisions could affect the profitability of their investments. Fifty-five countries are joining it, including Russia, Central Asian countries, Turkey, Switzerland, the European Union (EU) and its twenty-eight member countries (Brexit has not yet taken place).

“Incompatible with the Paris Agreement”

Since then, almost all European countries have paid the price, attacked one after the other by investment funds or companies that feel wronged by government decisions. This was the case of Germany, when it decided to phase out nuclear power in 2011, of the Netherlands, which in 2019 recorded the closure of coal mines by 2030, or of Italy, which banned offshore drilling in 2015.

You have 68.01% of this article left to read. The following is for subscribers only.