After the hailstorm, Le Taillan-Médoc in Gironde heals its wounds

Devastated. The city of Taillan-Médoc, northwest of the Bordeaux conurbation, was one of those most affected Monday evening by the violent hailstorm that hit the Gironde. 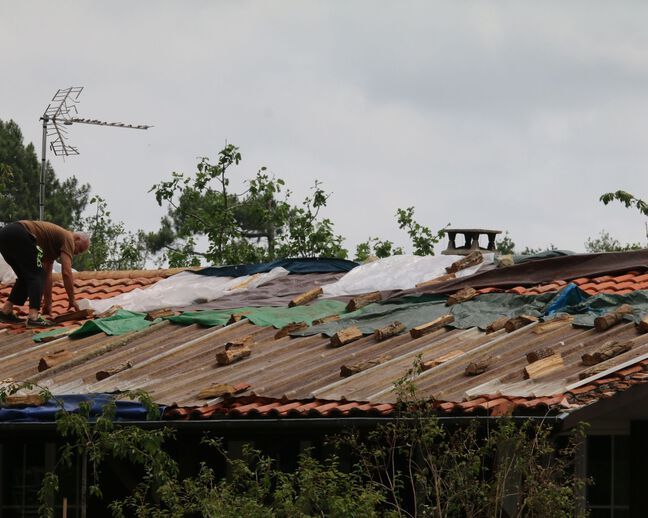 This Tuesday morning in the streets of the city, there was an impressive parade of tow trucks, loaded with vehicles destroyed by the impacts of hailstones, sometimes as big as “a tennis ball” according to some testimonies. Dozens of roofers, some who came spontaneously from all over the Gironde to help the victims, took over the roofs of the houses. The objective is to seal homes as much as possible, while new storms are expected on Tuesday evening. The cleaners also began to roam the main artery of the town at the end of the morning, when the sidewalks are strewn with debris, mainly tiles reduced to crumbs, but also the remains of bumpers or car indicators…

“After five minutes, it was real tennis balls that fell”

It is an understatement to say that the inhabitants are shocked, some still having trouble containing their emotion, even their anger. Mouna, who has lived in the town for twenty years, saw her roof destroyed and her house partially flooded during this terrible episode. Panicked, she took refuge in the toilets after the first hailstone impacts. Then its roof windows began to explode under the force of the blows. “It only lasted a few minutes, but there were only very large hailstones, then the water started to seep into the house, especially through the spotlights,” she says. “We tried to call the fire department but they were overwhelmed. »

“It was 9:30 p.m. when the sky started to darken,” recalls this young couple, who live in an apartment. “In one minute heavy rains arrived, then hailstones. After five minutes, real tennis balls were falling. The entire second floor of our residence was flooded, we live on the first floor, we also had water in our apartment, but not too much damage. On the other hand, our cars are dead, like all those of the residence… ”The couple had to go to the town hall in the morning, to obtain a document claimed by the insurance companies. Several businesses were also severely affected. “I was warned in the evening that the storm was starting to be severe in Taillan, says this trader who does not live in the town. I then turned on my security camera, and saw that the ceiling was starting to shake. I jumped in my car to go see what was going on. When I arrived at Taillan, I immediately understood what was going on…” Leaves and branches of trees, finely chopped, covered the streets. “It’s a disaster…” he concludes, looking at the gutted ceiling of his business. According to the Gironde prefecture, 219 requests for intervention were made in the town of Taillan-Médoc, and 240 in Saint-Médard-en-Jalles, the neighboring town also hard hit, out of the 862 requests for intervention at from the Gironde. “The material damage is significant with many damaged roofs and many flooded premises, details the prefecture. About thirty people were sheltered in the rooms opened by the two municipalities. The medico-psychological emergency unit was called in to provide psychological support to victims in the town of Taillan-Médoc. »

The mayor of Taillan-Médoc, Agnès Versepuy, is devastated. “About 80% of the houses in the town are impacted to a greater or lesser extent, and many are uninhabitable with collapsed ceilings,” she says. Many people left the commune overnight because they could no longer stay at home. “It’s the apocalypse,” she concludes.