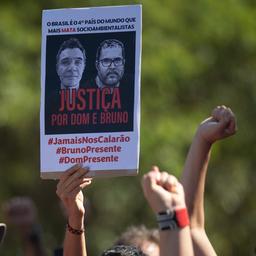 Police have not released the names of the new suspects. In a brief statement, the police said the investigation aims to “map all circumstances, motives and persons involved in the case”.

Earlier, three men were arrested; Amarildo da Costa, a fisherman who confessed to the murder of Phillips and Pereira, his brother Oseney, and Jeferson da Silva Lima.

Phillips wrote for the British newspaper The Guardian and Pereira worked for the Brazilian government agency for indigenous affairs. The two were on an expedition together in Brazil’s Javari Valley, along the border with Peru. They were said to be interviewing for a book on conservation in the area that is the scene of illegal fishing, logging, mining and drug trafficking.

Police say Phillips and Pereira were shot dead with hunting ammunition. Before the two traveled together, Pereira is said to have received death threats, Indigenous organizations say.

The group says it has warned the police numerous times since the end of last year that a criminal organization is active in the Javarivalley. Police are still looking for the boat Phillips and Pereira were traveling in and in which they were last seen alive.