Colombia prepares to choose between the left or a tycoon

After punishing the traditional political class with their votes, Colombians will return to the polls today to elect a president between two candidates with populist ideas, but with different visions of the country: the leftist Gustavo Petro and the real estate tycoon Rodolfo Hernández.

In a close campaign, the latest polls allowed by law show a technical tie, so the blank vote and the undecided become relevant, in a country that, although it has 39 million potential voters, suffers from a high abstention rate that in the first round was 45 percent.

Both Petro and Hernández propose a change against the current government of the conservative Iván Duque, but their origins and trajectory make them two different populists.

Petro, 62, was born to a humble family on the Caribbean coast and later moved to nearby Bogotá. In his youth, when he was an economics student, he was a member of the M-19 guerrilla -nationalist and anti-imperialist- that disappeared in 1991 after signing a peace agreement with the state. Since legality, Petro has been mayor of Bogotá, senator and three times presidential candidate, always from the left and progressive and, therefore, in the opposition.

Hernández, 77, was born into a working and peasant family from Piedecuesta, a town in Santander in the northeast of the country. He studied Civil Engineering in Bogotá and then returned to his homeland, where he amassed a $100 million fortune selling and financing thousands of homes, mostly to vulnerable families. He only entered politics in 2015, after a lifetime as a businessman, and was elected mayor of Bucaramanga as an outsider under the premise of “not stealing”, cleaning up finances and fighting corruption.

Silvia Otero Bahamón, doctor in Political Science and professor at the Universidad del Rosario, finds that, although they are two populists who “have an ideology based on the division between the corrupt elite and the pure people”, each one understands their fight against the establishment.

“Petro is related to the poor, the ethnic and cultural minorities of the most peripheral regions of the nation, who are finally taken into account and invited to participate in democracy,” Otero assured. While Hernández’s people “are more ethereal, they are the people who have been let down by politicking and corruption. It is a looser town, to which the candidate reaches directly via social networks, ”he added.

Petro carries the weight of having been a guerrilla and although he is no longer in arms, in Colombia the left has been marginalized after dealing for more than five decades with the now-defunct guerrilla Revolutionary Armed Forces of Colombia (FARC) that signed peace in 2016 with the State. Although there are still armed groups to defeat, the post-conflict has given way to new discussions more focused on social guarantees. 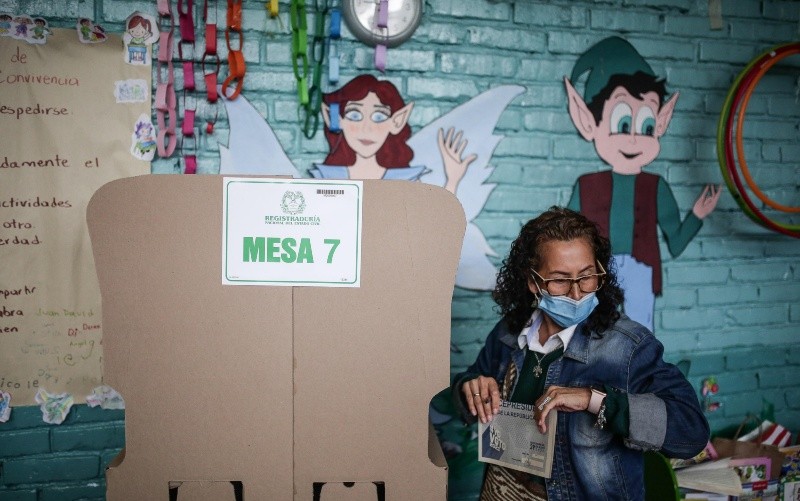 More than 39 million Colombians have the right and the civic obligation to cast their vote. XINHUA/H. Peace

Change in front of neighbors and the world

Foreign relations would change with the arrival of either of the two candidates. Both would restore diplomatic relations with Venezuela, broken since 2019 between Nicolás Maduro and Duque, who recognizes opposition leader Juan Guaidó as interim president. These positions have been celebrated by Maduro, who recently said that his government is willing to cooperate with the next Colombian president.

As for the United States, which sees Colombia as its greatest ally in the region, both want to restructure the Free Trade Agreement (FTA) and the fight against drugs, as they are against the use of the herbicide glyphosate to fumigate coca crops. . Rodolfo proposes ending the lawsuit by giving free doses to addicts in Colombia, although he did not specify how he would combat illegal transnational groups. Petro would promote the substitution of illicit crops and promote prevention.

“Regardless of outcomes, the United States looks forward to working with the next administration to strengthen relations,” US Secretary of State Antony Blinken said Wednesday at an event marking 200 years of bilateral relations. “We are strengthening our economic ties, last year we celebrated the 10th anniversary of the FTA, this has doubled exports of agricultural goods from Colombia, with the US being the main importer,” he stressed.

In the midst of a hard-fought campaign, Carlos Suárez, a Colombian political analyst and marketing consultant, explained that the two candidates must avoid making mistakes that would take away voters a few hours before the polls open. One risk scenario could be a nationally broadcast presidential debate to be held by court order, but as of Thursday night it was unclear whether it would happen.

Colombia has just gone through a pandemic, it has high levels of inflation, unemployment and violence remains latent, especially in rural areas where armed groups are vying for control of drug trafficking and illegal mining routes.

The outgoing conservative president Iván Duque does not enjoy popularity and a year ago he dodged massive demonstrations fueled by a tax reform and fueled by historical claims in a country with gaps in inequality.

The candidates speak to that country.

“The space to make politics from the center was rapidly reducing because the needs that people have at this time do not allow for gradualism or moderation. After the pandemic and confinement, what they want is to have three plates of food on the table, ”she told analyst Sandra Borda.

In the streets of Bogotá, Gentil Pérez, a public official said that it is time to “renew the political class”, although he did not reveal who he would vote for. Yahaira Cuesta, a university student, assured instead that she would do it for Petro because as a woman she feels “fully identified” with the role of Francia Márquez, an environmental and social leader who launched herself into politics for the first time and that if she reaches the position she would become the first Afro-Colombian female vice president. Petro, a seasoned speaker from his days as a senator, proposes reforms in pensions, health and agriculture by discouraging the accumulation of land.